I mention often here in my blog our many trips to Napa Valley and our practice, learned and refined after many years, of focusing on but one Appellation per trip. This not only allows for simplified and effiicient travel logistics moving from site to site, but allows immersive focus on the nuances of the terrior, or sense of place that represents a particular AVA (American Viticulture Area - aka Appellation.). AVA's are designated grape-growing areas distinguishable by their common geography and micro-climate such that they are reflected in the wines produced from there. Such boundaries are defined by the Alcohol and Tobacco Tax and Trade Bureau (TTB) of the US Department of the Treasury.

AVA's are common in Europe such as the Italian Indicazione Geografica Tipica (DOC or DOCG) or the French AOC, Appellation Original Controllee system from Bordeaux. Those define characteristics of wine from a particular area with rigorous rules about what grapes can be grown and how they are tended and harvested. Unlike most European wine appellations of origin, an American AVA specifies only a geographical location from which at least 85% of the grapes used to make the wine must have originated from there to be designated or labeled as a AVA wine. Beyond labeling a wine from Napa Valley, then Mt Veeder or Oakville, the next level of granularity of labeling might be a specific vineyard designated wine such as the Hess Collection Allomi Vineyard designated Cabernet Sauvignon featured in my most recent blogpost. Most folks don't realize there are sixteen such appellations in Napa Valley and over fifty in Bordeaux! 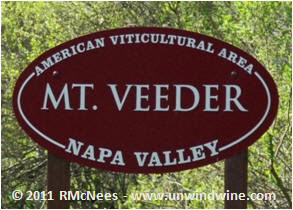 Initial trips to any wine region should strive for exposure to the array of different styles that the area has to offer, but after basic understanding and appreciation of the range on offer, this approach of focusing provides for greater appreciation and minimum hassle. This approach served us well as we visited and traversed Napa's various appellations, especially those in the mountains - Howell Mountain, Atlas Peak, Diamond Mountain, and Spring Mountain District. But this approach was challenged on our last Appellation specific trip to Napa Valley Mt Veeder due its sheer size, the vastness of its geographic spread, and the ruggedness of the terrain. 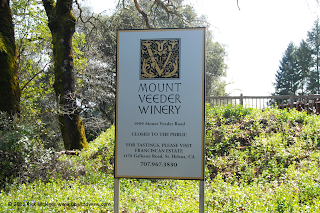 As we traversed the length and elevations of Mt Veeder we came across several vineyards of Mt Veeder Winery, the producer whose namesake is this place. From their original Winery Ranch to the south that goes back over a hundred years, to the North Ranch high up the mountain, we saw Mount Veeder vineyards spread across the mountain. Mount Veeder vineyards represented not only the the ruggedness of the terrain carved out of terraces up against the hillside, but also the spectacle of the mountaintops with views to the valley floor far below and the distant vistas stretching to San Pablo Bay and San Francisco far to the south.. 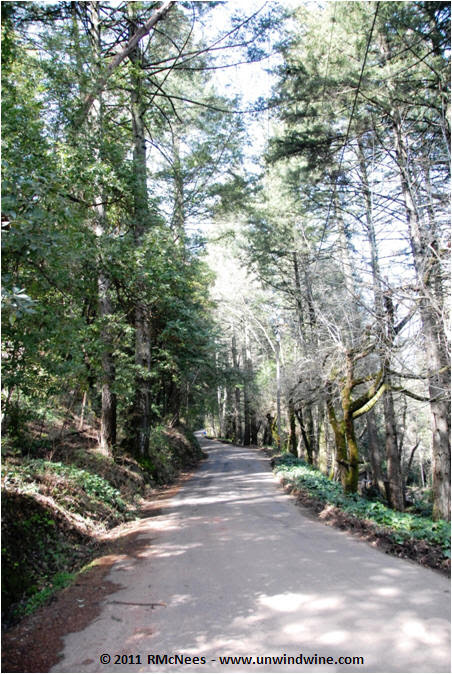 Mt Veeder's vineyards stretch from elevations of  1000 up to 1,600 feet high above the Napa Valley floor and represent diversity of subtly different micro-climates or growing conditions. Up above the fog bank that rolls in from nearby San Pablo Bay to the south, the mountain slopes are exposed to sun from early morning, yet they're protected from the afternoon heat by the surrounding mountains. The mountain fruit ripens slowly allowing it to hang on the vines longer in a longer growing season that lasts into late autumn, often into November.

The thin, rocky soils and the rugged mountain terrain means the scarce water drains quickly through the volcanic mountain soil. The slow growing vines produce small clusters of intensely-concentrated berries, giving extremely low yields—as little as half that of vineyards on the Napa Valley floor, but offset by the longer growing season.

Mt Veeder (Winery) grows all five of the Bordeaux varietals, Cabernet Sauvignon, Merlot, Cabernet Franc, Petit Verdot and Malbec and produces Bordeaux style wines blended from them, but with a California Napa Valley flair characteristic of their intense mountain grown fruit. We've enjoyed this label since the early nineties.

I've heard legendary winemaker Robert Craig, who spent his early years on Mt Veeder, who produces designated Cabernet Sauvignons sourced from mountain vineyards on Mt Veeder as well as the other mountains from the corners of Napa Valley, as well as the valley floor, say his favorite is Robert Craig Mt Veeder Cabernet Sauvignon, for its intense flavors and firm tannins and backbone.

Hence, its noteworthy to pay attention to the producer whose name is synonymous with this classic characterization of Napa Valley's oldest and  most vast growing area.

This is a complex wine that changed its focus and revealed itself differently from initial opening to an hour later and moreso the next day. Its bold but lacks smoothness or polish. Deep, dark inky purple and garnet colored, medium-full bodied. An initial layer of intense slightly tart black cherry and ripe black currant fruits give way to full forward flavors of ripe plum with hints of caramel and with tones of anise and mocha. The lingering finish boasts vibrant complex layers of sweet oak, and tobacco with a touch of black olive on a firm tannin backbone core.

This wine represents good value widely available on sale below $30.

Posted by UnwindWine at 4:00 PM No comments: