Fellow wine buddy and 'Pour Boy' Bill C, and Beth, returned from Charleston for the weekend and stopped in for a visit. Bill brought with him a Cliff Lede Stags Leap District 2010 Cabernet to share. We had open from the night before a Hall Napa Cabernet 2006, and we opened a Cliff Lede 2006 for a mini horizontal and vertical tasting. 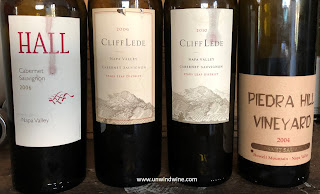 This was especially fun because both Cliff Lede and Hall have been highlights of several of our Napa Valley Wine Experiences that we have shared together. Some of these highlights are chronicled in the following features:

Later, we also pulled from the cellar a Piedra Hill Howell Mtn Cabernet to round out the flight.

We started the flight with this 2006 Hall Napa Cabernet 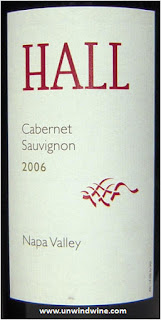 Back in 2013 and then again in 2015 I gave this label 93 points. This time and the most recent tasting back in February I gave this 92 points, indicating the bright vibrant fruits are starting to give way subtly to the non-fruit accents cited below.

Consistent with earlier tasting notes when I wrote, "Dark garnet colored, medium to full bodied, a symphony of flavors accented by bold expressive black berry and black raspberry fruits with highlights of anise and mocha with tones of cedar, sweet toasty oak and clove spice and hints of earthy leather turning to a smooth polished lingering finish."

After being opened a day, this is predominant anise licorice and smoke on the black berry fruit with hints of cedar and clove spice on the finish.

Back in 2014, I wrote this about this release: "Six years after release, the 2006 Lede Estate Cabernet seems to be reaching its stride at the apex of its tasting curve. Medium full bodied, deep ruby color with full forward blackberry and black and red currant fruits with tones of mocha, clove spice and hints of tar and sweet oak on a smooth polished flavorful lingering finish."

Three years later in 2017 I appended my journal with this note, "Consistent with earlier tasting notes, (see). The notes of mocha were replaced with tones of leather, tobacco leaf and hints of cedar as this passes its tenth year." 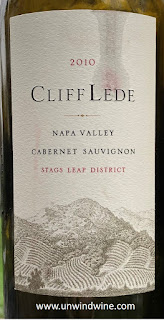 We hold this label in our cellar but hadn't as yet tried it so this was a special treat.

Bill published his tasting notes of this day in his Cellartracker posting: "Medium garnet color with a hint of brown. I think this is simply a characteristic of the wine as there is no evidence of diminished quality and the same color characteristic exists in a 2006 Lede consumed side by side. Perfumey nose. Deep, rich and full bodied. Flavors on the palate include milk chocolate, pepper, baking spices and tar. Drinking very well now but plenty of staying power."

We tasted this label together back in 2014 at a dinner hosted by Bill and Beth that was featured in this blogpost, https://unwindwine.blogspot.com/2014/10/select-california-cab-comparison-tasting.html. 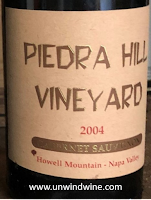 This is from Bill Smith, the original owner of La Jota, and the current proprietor of W.H. Smith on the Sonoma Coast.

Posted by UnwindWine at 7:04 AM No comments: