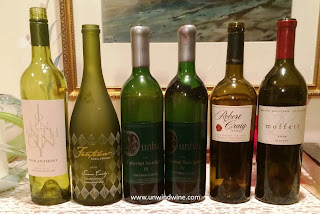 With the main dinner courses we had Fantesca Sonoma Chardonnay 2008, provided by Bill, and Dunham Cellars Columbia Valley Cabernet Sauvignon 1997 and 1998.

An up and coming producer in Napa Valley, John Anthony Truchard comes from a family with a long history in wine production going back several generations. Today, he and his wife Michelle produce a line of Cabernet, Syrah and Sauvignon Blanc from fruits grown in select leased small vineyard sites from the Oak Knoll District, Carneros and Coombsville across Napa Valley. They operate the Day/Night wine tasting lounge in downtown Napa to showcase their wines.

Back in 1890, John's great Grandfather Jean-Marie Truchard and his family arrived from Leon, France at Ellis Island. Over the ensuing generations, the family settled in Northern California working the land and producing wines.

John Anthony began selling wine commercially for the first time in 2006. The John Anthony Tasting Lounge is opened in Downtown Napa in 2010.

The inaugural release of this label appeared in 2008 and received a 93 point and best value rating from Wine Spectator. This 2013 John Anthony Napa Valley Sauvignon Blanc is sourced from vineyards they planted and farm in Napa Valley.

I've written often in these pages about Fantesca wines and visiting their spectacular Spring Mountain Estate, winery and vineyards. We visited there with Bill and Beth and tasted and sourced this wine upon release. 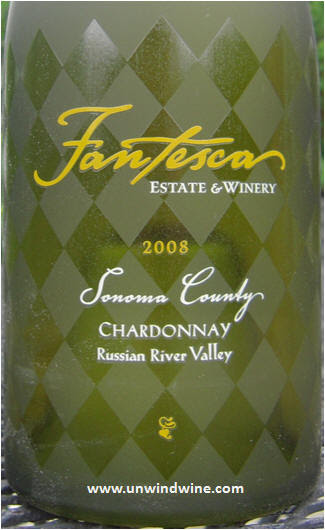 Bill brought this from his cellar. His notes from Cellartracker - "Medium straw in color. A bit of perfume on the nose. Pear, peach, lemon zest and just a hint of buttery oak on the palate. When I selected this from the cellar to accompany friend Linda's broiled salmon with dill I was pleasantly surprised to find there was still plenty of freshness left. I don't think this will get any better but it is awfully good right now."

The fruit was a bit more subdued than earlier tastings in 2010 and 2012 but this is still very tasty. Butter colored, light-medium bodied, nicely integrated, smooth, crisp and clean, flavors of tropical fruits, ripe melon, hints of lychee and under current of subtle citrus with a pleasant lingering finish. 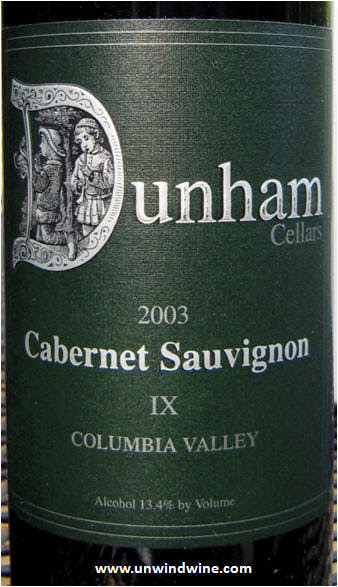 This is an example of the perils of having a rather extensive wine cellar. Since we first discovered Dunham Cellars Cabernet Sauvignon with this 1997 vintage, we have collected a nine year vertical of this wine. With such a selection, one tends to wait until you can open multiple bottles from multiple vintages to be tasted in one sitting, which of course reduces the opportunities to taste these wines.

Tonight provided the opportunity to open a pair of vintages and I was prepared to open more, but we didn't have a large enough group to consume more wines.

Hence, tonight we opened our two oldest bottles of this collection as aging would dictate drinking the oldest first.

An interesting element of Dunham's branding is that each vintage/ label is adorned with the roman numeral denoting the sequence in the series of vintages for that label, this 1997 being III, their third such release in the line.

Previously, I opened their 2003 release (above), noted as 'IX', their ninth release. We've also tasted and noted their 2000 vintage or VI release. 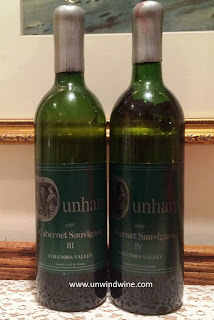 Dunham are a family-owned winery with several estate vineyards in prime locations around the Walla Walla Valley Appellation. Dunham grow and produce varietal based wines in Cabernet Sauvignon, Syrah, and Chardonnay as well as Trutina, their Bordeaux style blend. Dunham wines are sourced from some of the finest vineyards in Washington State Walla Walla, Yakima and Columbia Valleys.

When Dunham's first vintage, a 1995 Cabernet Sauvignon was released, it was deemed one of the finest wines made in Washington by Wine Enthusiast Magazine. Subsequent vintages and varietals have consistently earned high marks with both consumers and trade.

Proprietor Eric Dunham is winemaker and also an artist who creates original artwork that is featured in a series of 'Artist Series' labels for Dunham Cellars vineyard designated and special bottlings.

The 100% Cabernet Sauvignon fruit for this 1997 vintage wine was sourced from the Seven Hills, Pepper Bridge, Portteus, and Bacchus Vineyards.

This was showing its age and is most likely past its prime, and as such, is entering the late stages of its drinking window.

Dark garnet colored with slight bricking on the edge, an ever so slight tinge of brown rust color starting to set in. This is medium bodied with bright tangy black cherry predominates followed by tones of black raspberry, smoke, tobacco leaf and eucalyptus with hints of cassis and creosote turning to tangy slightly astringent dark cherry, floral and cedar on the moderate tannin lingering finish.

The 1998 vintage is also 100% Cabernet Sauvignon, but this is sourced from Seven Hills, Pepper Bridge, Portteus, Konnawok, Bacchus, Williard, Wauluke, and Vanessa Vineyards.


Upon opening this started as musty, earthy and leathery, but over the course of an hour the tangy cherry fruits emerged and eventually converged to mirror the profile of the earlier '97. By the next day, the '98 was brighter and more lively than the '97 which was somewhat shrouded in the smokey cassis layer.

This was ideal following the more subdued Dunham that lined up with the entree course. This aligned with and complimented well the dark chocolate mousse. I sense this is at the apex of its drinking window and while it won't likely improve with further aging, it has several years of life yet at this level. 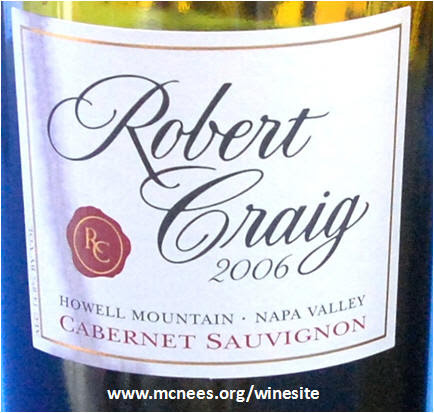 Bill's tasting notes from Cellartracker - This long time favorite is hitting its stride but will continue to improve and has years of life left. Opaque, indigo in color. Rich, dark berry flavors on the palate, evolving into an earthy finish of slate, pencil shavings and dark chocolate. An amazing accompaniment to a dessert of chocolate mousse, raspberries and especially spectacular chocolate covered cherries.

This was an ideal follow on to the Robert Craig Howell Mountain having the same tasting profile but being lighter and less complex. 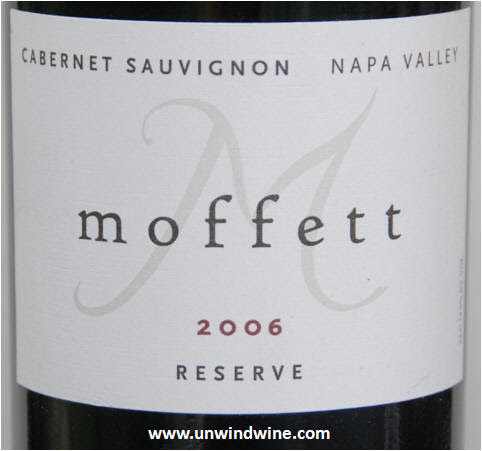 Except as noted, this was consistent with my earlier tasting notes from two previous tastings.

This is dark garnet colored - medium-full bodied - polished and smooth with full flavors of blackberries, ripe plum and currants - with the fruit seeming to trend down somewhat from my recollection of earlier tastings, highlighted by a layer of mocha chocolate, anise, and tones of black tea with a touch of oak and spice - the wine shows great balance of toasted oak and acidity.

Tonight, that trending of the fruit becoming more subdued continued, but consistent in the other traits. There were not other indications of diminution from aging.