This is the last of a selection of this label that we acquired during one of our several visits to the Del Dotto properties around the millennium. This somewhat obscure label was a tribute to the Caves at the old historic winery facility (left) over on Atlas Peak Road on the northern edge of Napa town that they took over around that time and which they still inhabit and operate as a tasting room to this day. 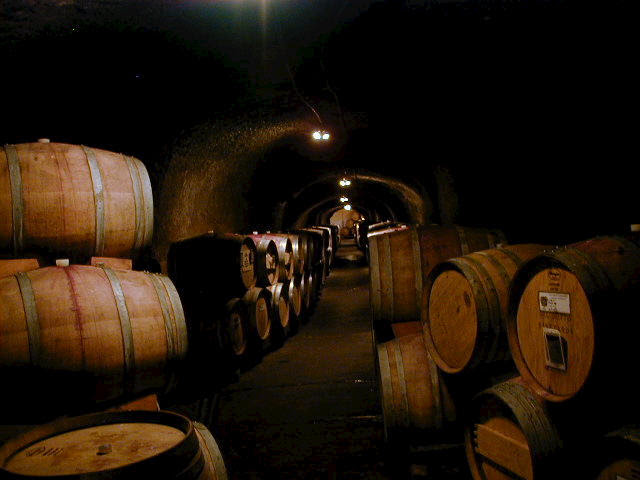 Since then, they have built and opened their magnificent 'Venetian Estate Winery and Caves on the Del Dotto Rutherford Estate where Zinfandel Lane meets Hwy 29 just south of St Helena. Both locations conduct the spectacular Del Dotto cave tours (left) which  remain a highlight of many visitor's trips to Napa Valley.

Caves was a 'second' label from their flagship branding, a unique blend of Cabernet Sauvignon, Merlot and Sangiovese. I've written here about them being a pioneer with Napa Valley Sangiovese during this time. It was likely their secondary selections that didn't make it into the flagship blend, or excess remaining bulk from the primary production, although this is less likely since this was a more value based price point relative to the flagship labels offering greater QPR - Quality Price Ratio. Even then, this is holding and showing remarkably well after fifteen years, another testament to the age worthiness of the Del Dotto line.

Posted by UnwindWine at 6:03 PM No comments: Links to this post