"The vines so drenched with sunlight, they appeared to be radiating rays themselves. A magical sight to experience; - a hallowed blurry haze."

From the rear label of HazyBlur Barossa Valley Shiraz 2003 and hence how it derives its name, hazyblur! 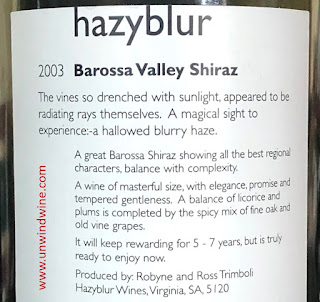 We pulled this vintage South Australian Barossa Valley Shiraz for serious sipping with some artisan cheeses and soup. Living out the Coronavirus enforced exhile!

The prestigious Barossa Valley is located in central South Australia, and is akin to California's Napa Valley with scenic picturesque topography covered in grape vines.

First farmed by 19th century German-speakers who immigrated from what is now Poland, the Barossa Valley is the crown jewel of the region.

Like Northern California, South Australia has widely varying climates, from very hot, dry areas to cooler, high altitude areas. The region has more than 150,000 acres planted in vineyards, more than three times that of Napa Valley with just less than 50,000. (Compare that to 300,000 in Bordeaux!) Shiraz is king, the primary varietal of the region however it also produces Cabernet Sauvignon, Grenache, Mourvedre, Chardonnay and Semillon.

The Barossa was founded by Colonel William Light, the South Australian colony’s Surveyor-General, who named the Barossa in 1837 after the site of an English victory over the French in the Spanish Peninsular War. In the mid-1800’s Silesian and English immigrants settled in the area. 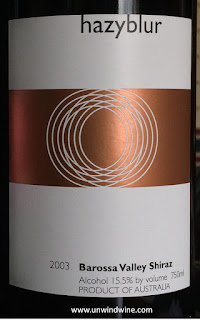 The Barossa is comprised primarily of two distinct sub-regions: Eden Valley and Barossa Valley which is the warmer valley floor at 270m. The warm Mediterranean climate has hot dry summers with relatively low rainfall moderated by cool sea breezes from the Gulf of St Vincent, much like the southern end of Napa Valley. Like the southern Rhone river valley, hot northerly winds can occasionally dominate leading to vine stress. Like Napa and the Rhone, older established vineyards are dry-grown, but supplementary irrigation is being used more extensively. The valley is comprised of rich brown soils and alluvial sands.

We hold a half dozen vintages and labels of Hazyblur Shiraz from their sites in Barossa Valley, Baroota, Kangaroo Island, Adelaide Plains, McLaren Vale and the broader South Australia region. This bottle from 2003 was selected as it is the oldest in our collection, as part of practical cellar management.

Linda actually likes this heady, super ripe, rich and intense style more than I do. This is holding its own at seventeen years but will most likely not improve, but start to diminish with further age, so its time to drink.


Posted by UnwindWine at 9:44 AM No comments: