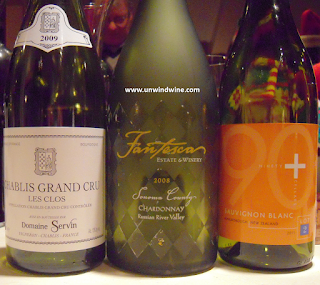 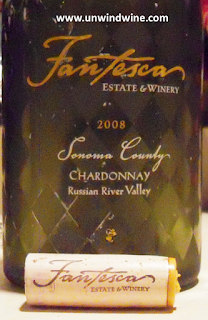 We first tasted this wine at the winery with Bill and Beth during our Napa Valley Wine Experience 2009 visit to Spring Mountain. Heidi Barrett had just joined Duane & Susan Hoff at Fantesca as consulting winemaker and this was the legendary winemaker's first ever Chardonnay, showcased in this video on the producer's website. A superb accomplishment, indeed, in this refined Burgundian styled release fitting its elegant etched bottle and wood case packaging.

Butter colored, medium bodied, a symphony of well integrated and smooth crisp, bright, flavors of tropical fruit, melon, hints of lychee and under current of subtle citrus with a pleasant long lingering finish.

Bill's tasting notes for this wine from Cellartracker:

Golden straw color in the glass. An interesting contrast to the '07. The '08 has overtones of peach and melon on the palate. The '07 leans more toward citrus flavors. Both are very clean and crisp on the palate, making Fantesca my favorite Chardonnay although I prefer the citrusy version. Very light on the oak. 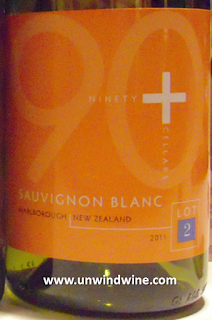 I've been looking for the right opportunity to write about this new label.  90+ Cellars has burst on the scene in recent years offering a wide selection of private labeled wines from around the world including Argentinan Malbec, Italian Pinot Grigio, Australian Shiraz and this New Zealand Sauvignon Blanc. They buy and resell excess production from various producers under their own 'negotiant' label, often at a fraction of the offer's branded offering price. While such arrangements are typically discreet so as not to undermine the branding and pricing of the supplier/producer, the cat was let out of the bag so to speak when one of their recent offerings still had the original authentic corks in the bottles. Note the labels will  typically be very generic in nature regarding the source of the contents. Check the 'Lot number' on the label to identify each unique offering or to distinguish between various offerings similarly labeled.


Don't count on all labels or subsequent releases to be this good since their offerings will vary from year to year based on what they can negotiate with their producer suppliers, but for the moment, this one is worth checking out.

Under wide distribution, I've seen their displays of their family of wines at mega merchants Binny's here in Chicagoland to Super Buy Right Liquors in Thoms River New Jersey. This is a prime example of what in some cases are extraordinary high QPR value offerings (QPR - quality to price ratio).

This Sauvignon Blanc is vibrantly expressive with tropical and citrus fruits with ripe melon and lychee with hints of herbal and gooseberry notes. Distributors notes - "Fresh, sweet fruit and crisp acid gives balance and an elegant structure with a smooth finish, a classic New Zealand sauvignon blanc". 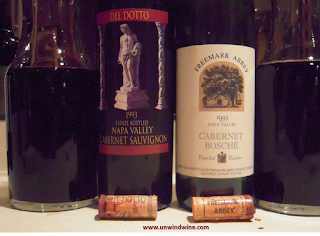 My unwindwine.blogspot.com here features many tasting journal postings for these two Napa Valley Cabernets - Del Dotto and Freemark Abbey. New Years eve provided the perfect opportunity to showcase this mini horizontal of these two 93's side by side.

I believe the '93 Del Dotto Cabernet was their inaugural vintage release. We've written about discovering Del Dotto back in the early years following their feature in Wine Spectator as one of the 'Undiscovered' new emerging producers on the Napa scene. (See series of Del Dotto features on our unwindwine blogspot.  http://unwindwine.blogspot.com/search/label/Del%20Dotto ).

The '93 represents the oldest Del Dotto in our cellar and the beginning of a dozen year vertical of this wine. As such, this was the oldest Del Dotto cab we'd ever tasted and our first tasting ever of this vintage. I was anxious to see how this had held up and what this meant for our remaining collection holdings.

Based on previous positive tastings of aged Del Dotto cabs, I was not surprised to find this twenty year old still holding up well. We decanted and aerated this upon opening, about two hours before tasting. The only sign of diminution might have been a slight astringency on opening which would be the case according to the tasting notes from the producer and from Wine Spectator for this release, shown below. The wine was most expressive about an hour after opening and then mellowed and softened a bit for the rest of the evening.

This wine was dark inky purple colored as seen in the carafe adjacent to the bottle, and full bodied. It opened with big full forward aromas and flavors of complex floral, cedar and spice with layers of concentrated fruit - cherry, black berry and plum, giving way to toasty oak and hints of cassis on a lingering floral and black fruit filled finish.

Wine Spectators notes: "Packs a wallop with its rich heart of earthy currant, mineral, spice and cedary oak flavors. Smooth and rich, given its size and concentration of fruit flavors. Drinkable now, but should age into the next century with ease. 497 cases made." (04/07) 92 points.

Like the Del Dotto above, we have much experience with this wine and have featured it in several earlier wine journal postings - see http://unwindwine.blogspot.com/search/label/Bosche including our recent mini vertical tasting of near vintage 91 and 92 releases of this wine.

This was an interesting tasting of these two '93s Napa Cabs, showing two contrasting styles with the Del Dotto exemplifying bold, forward fruit filled new world against the more subdued, complex old world Bordeaux like style of the Freemark Abbey Bosche', indicative of its longer history pedigree and pursuit of this label.


The Freemark was dark garnet colored with medium body, Bordeaux like earthy leather, graphite and creosote tones accent the cedar, mint and the black berry and black cherry highlights with a subdued finish.

Bills earlier tasting notes for this wine from Cellartracker:

Medium red color with slight bricking around the rim. Some cedar and mint on the nose. No noticeable tannins, fairly simple but still significant fruit. Nice bottle of wine but time to drink.

Medium garnet color with a touch of orange on the rim. Opened with a musty nose but evolved over time to reveal some floral notes. On the palate, this evoked overtones of old world bordeaux with terroir dominating fruit. There were still hints of mint and eucalyptus that I normally associate with Bosche.