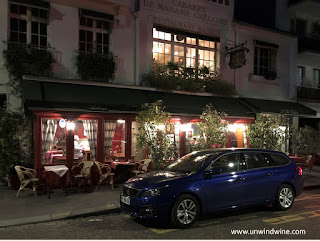 For our last night in Paris, wrapping up our EMEA roadtrip, we sought a simple, casual but authentic French dining experience. We found that plus a bit of history in Auberge Etchegorry, just a short walk from our hotel, as a perfect option.

Located in the 13th, just a 5 minute walk from Place d'Italie Metro station, or from our Rive Gauche Marriott, Auberge Etchegorry sits in the charming Gobelins area on a quiet cobblestone street over looking a park. A former cabaret, it offers a step back in time with its original setting, its red and flowery facade and period decoration.

According to history and legend,  the house was frequented by Victor Hugo, Chateaubriand and Beranger and was then called the Cabaret of Madame Gregoire. 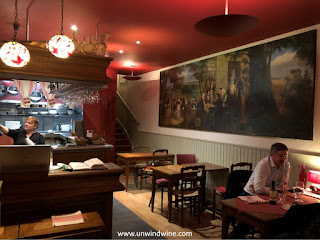 The bar features a mural painting of the eighteenth century Cabaret of Mrs. Grégoire. The restaurant and adjacent hotel du Vert Galant have been in the same family for 6 decades.

There are but a couple of al fresco tables out front, a small dinning room adjacent the bar on the ground floor, and a small dining room looking out over the treetops on the second floor. 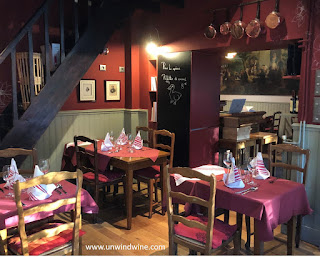 Three of us feasted on the house specialty,  Roasted duck breast in honey and spices. One of us chose another house specialty, the seared Foie gras that looked delectable and was reported to be 'to die for'. I opted for the Foie gras terrine flavoured with Jurancon wine and toast, which was excellent.

Our other colleague had the Hake fish with hazelnut crust, celery puree.

Following dinner we had the cheese plate and then the Le gâteau basque.

The portions were generous, the our server Wallace and the rest of the waitstaff were attentive and the selections were delicious, especially the Foie gras. 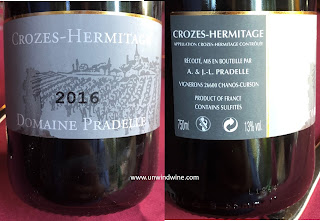 For our opening courses we ordered this Croze-Hermitage Syrah which went supurbly with the Foie Gras starters. This was a nice comparison to the Croze Hermitage we tasted just yesterday. In comparison, this label is a fraction of the price of the one we had yesterday and was relatively less polished and not as nicely balanced. It was enjoyable and appropriate for our none-the-less.

We finished with this Left Bank Bordeaux which was a nice accompaniment to our entrees, the cheeses and the dessert course.

Posted by UnwindWine at 2:52 PM No comments: 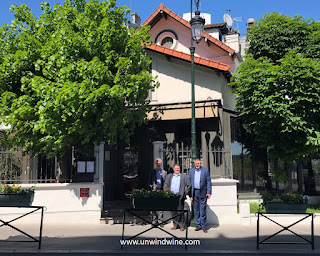 For a valued customer and partner meeting, we dined near the client site in the business district of Paris-La Défense, in the heights of the Puteaux neighborhood at La Escargot 1903.

In the Paris-La Défense area, it is less than 10 minutes from the Porte Maillot and 5 minutes from the Pont de Neuilly-sur-Seine. The restaurant is situated in a cottage-house atop the hill above the train, a short one block walk from the station.

The restaurant held a Michelin Star, earned under the leadership of young Paolo Boscaro, then lost it when he left to head the brigade of the Swiss restaurant of Anne-Sophie. The post has now been taken over by Chef Yannick Tranchant, (formerly La Grande Cascade and Neva) who is working to restore it to earlier prominence and achievement.

We dined on the Menu du Chef, a six service selection, and a flight of accompanying wines from the wine list. 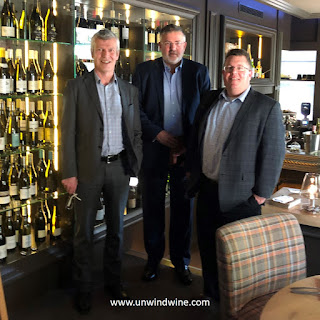 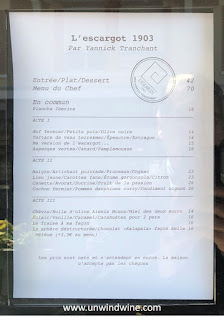 The wine flight from the winelist: 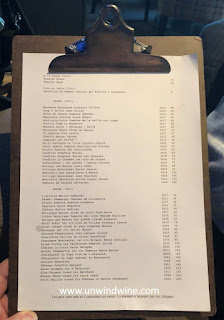 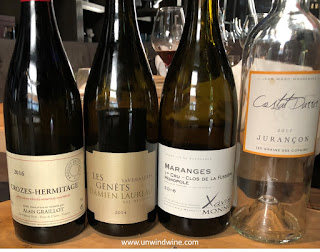 The food courses and accompanying wines: 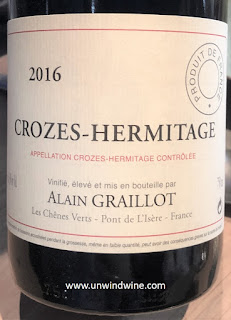 I asked for the St Joseph but they were out and substituted this label instead. This is exactly the style and profile that I was seeking.

From the vineyards of Crozes Hermitage that surround the hill of Hermitage, though they do not rise as high, nor are they on the steepest slopes. The difference between the wines of Crozes Hermitage and Hermitage is mainly the soil, as one comes down the Hermitage slopes the soil profile changes from hard granite rock to denser, sandier, clay rich soils.

Alain Graillot has been producing wines since 1985. Born in the Northern Rhône, he left to pursue a career in business, but returned home to his dream of creating great wines. Without the opportunity of stepping into an existing family winery, Alain undertook formal studies in Burgundy while seeking the guidance and inspiration of the best of the new generation of winemakers including Jacques Seysses of Domaine Dujac. He has 15 hectares of vineyards in Crozes Hermitage as well as 1 hectare in St-Joseph. He matures his red wines in one year old french oak barrels from Burgundy. 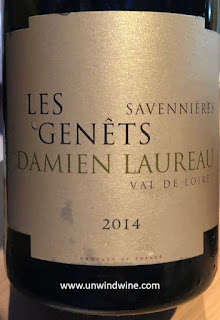 The Savennières appellation, including its ‘Grand Cru’ sub-appellations of Roche Aux Moines and Coulée de Serrant, is planted with 156 hectares of vineyard (100% Chenin Blanc) and produces some of the most noble and age-worthy dry white wines of France. Damien Laureau is widely acclaimed as one of Savennières’ top producers.

Often referred to as one of the appellation’s ‘new’ superstars, Damien has 20 vintages of experience. Coming from a family farming background, he started out working with his uncle at a small vineyard in Anjou in the mid 1990s.

By 1999 he had acquired his first vines in Savennières and in 2006 he abandoned the Anjou appellation to focus specifically on Savennières. Since then has gradually increased his vineyard sources through both acquisition and leasing, to the still very boutique total of 8.5 hectares. 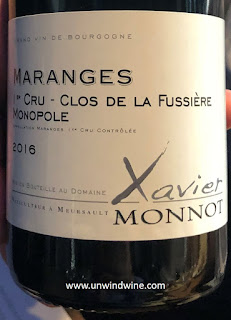 Xavier Monnot is a leading producer in Meursault. Prior to the release of the 2005 vintage, the property was known as Domaine René Monnier (Xavier's grandfather). In 2005, along with improvements in the vineyard and cellar, Xavier began bottling his wines under his own label.

Domaine Xavier Monnot is a 42 acre estate in Meursault with vineyards stretching from Beaune to Maranges. 60% of the Domaine's production is white and 40% red with several premier crus in Meursault, Chassagne-Montrachet, Puligny-Montrachet, Beaune, Volnay, and Maranges. Xavier maintains an average vine age of 30 to 40 years and practices lutte raisonnée (“reasoned struggle”).

Clos de la Fussière is a 2.6 acre block within and towards the bottom of La Fussière premier cru in Dezize-les-Maranges. It is a monopole belonging to of Xavier Monnot’s family for five generations. It is a steep, south-facing site that gives a wine that is rich, fleshy and dense.
Three villages at the southernmost end of the Côte de Beaune make up the Maranges AOC: Cheilly-lès-Maranges, Dezize-lès-Maranges and Sampigny-lès-Maranges. 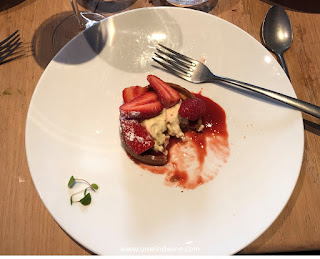 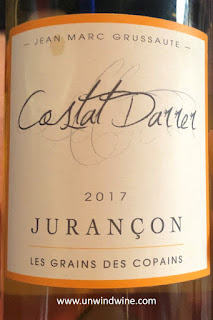 Since 2015, grape harvests at the estate of Jean-Marc Grussaute were not acceptable or sufficient for production, so fruit was sourced from neighboring winegrowers GC Pedeflous, SD Lacazette and P Vignau, hence the subtitle of the wine "the grains of friends".

Winemaker Notes: This wine of pleasure is characterized by its fruity and freshness. Its assertive character remains bordered by a soft and velvety sensation on the palate and a fruity finish. Very good balance between sugar and acidity. The aromatic range always expresses ripe and exotic fruits (tangerine, grilled pineapple, mango ...) 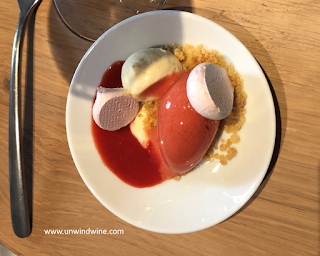 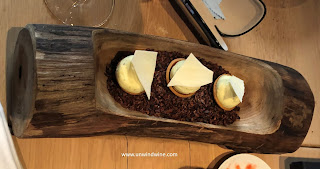 Posted by UnwindWine at 7:35 AM No comments: