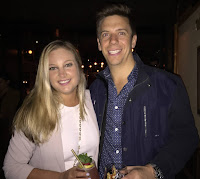 Son Alec and fiance Vivianna are engaged to be married in June of 2020. We traveled to Conneticut to visit our future in-laws, and the wedding venues. To celebrate the occasion, I took two birthyear wines from our cellar to commemorate the kids and their engagement.

We've collected numerous birthyear wines for son Alec. We also have a deep enough cellar so as to hold some wines from the birthyear of fiance and future daughter-in-law, Viviana. This was an occasion to do a combination tasting of wine from each vintage. 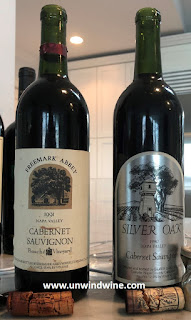 Silver Oak and Freemark Abbey are two of our favorite producers, from whom we hold several vintages and labels, however we don't necessarily hold labels of the same vintage from each. This provided an evening of celebration, and a comparison tasting or two Napa Valley Cabernet Sauvignon vintage wines of almost equal age, from two sequential vintages.

We have some special large format (six liter Imperials) birthyear bottles of Silver Oak (Bonny's Vineyard) for the gala event next year, so this is a warm up for the occasion with the Estate bottled label from the greater region, albeit not the extraordinary rare single vineyard designated label. We also served Silver Oak Bonny's Vineyard from the 1982 vintage at our eldest son Ryan's wedding, as well as several other birthyear special wines.

Our twenty nine year old bottle was well preserved with a perfect label and foil with a fill level half way in the neck, reduced less about 3/8 inches from being perfect fill. The cork was almost perfect although it did break in half on opening being slightly dry, but I used a conventional corkscrew. Were I at home, I most certainly would've used my customary two pronged cork puller, which I am confident would have extracted both corks in whole. 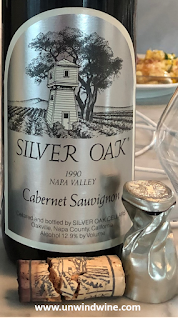 Dark garnet colored, medium full bodied, this had bright ruby garnet color, very slight bricking at the rim, with the black cherry and black berry fruits having given way to the predominant signature nose and flavor of infused sweet oak layer for which the brand is known and famous.

The black cherry and black berry fruit was subdued, somewhat Bordeaux like with accent by notes of spice, black tea and tobacco leaf with tangy acidity and soft moderate tannins on the lingering tangy finish.

While past its prime, apex of its drinking window, this will not improve any further with aging, but is holding its own and will likely remain at this level of its drinking window for a couple more years. I didn't decant this but served it straight from the bottle. I might do the same again the next time.

This is one of our favorite labels of which we hold numerous vintages dating back several decades. We acquired a case of this single vineyard designated label back around this period from the producer and picked up select bottles from nearby vintages to fill out our horizontal collection.

We picked up some of these bottles during our visit to the Estate over the years including select bottles from their library collection for special occasions.  We're longtime fans of Freemark Abbey, witness by the fact we hold bottles going back to the early eighties. Our Freemark Abbey experience highlights include our visit to the winery during our Napa Wine Experience 2009, when wine buddy and fellow 'Pour Boy' Bill and I had a fun time touring their library cellar with Cellar Manager Barry Dodd (Bill and Barry, right).

That day, we purchased two aged vintage selections - 1974 and 1978 commemorating our anniversary years, which we tasted that evening across the road at Graystoke Manor at the CIA (Culinary Institute of America) in St Helena. 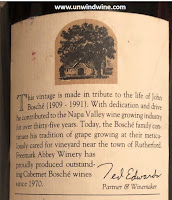 Another notable point about this vintage is the poignant reflection on the rear label. It states' "this vintage is made in tribute to the life of John Bosche' (1909-1991). With dedication and drive he contributed to the Napa Valley wine growing industry for over thirty-five years.

Today, the Bosche' family continues his tradition of grape growing at the meticulously cared for vineyard near the town of Rutherford. Freemark Abbey has proudly produced outstanding Cabernet Bosche' wines since 1970." Signed Ted Edwards, Partner and Winemaker.

Tonight, this wine showed more fruit and was aging more gracefully than the similarly aged, one year older Silver Oak. It showed better than recollections recorded at earlier tastings.

Like the Silver Oak, our twenty eight year old bottle was well preserved with a perfect label and foil with a fill level half way in the neck, reduced less about 3/8 inches from being perfect fill only a mm lower than the Silver Oak. Like the Silver Oak, the cork was almost perfect although it did break in half on opening being slightly dry, but I used a conventional corkscrew. Were I at home, I most certainly would've used my customary two pronged cork puller, which I am confident would have extracted both corks in whole.

In 2012 I wrote, "This bottle was suprisingly lean and austere, not what I recall from this Napa vintage generally, but revealed such against the '92 which showed markedly differently. Garnet colored with a brickish rim, this was light bodied with properly balanced but slightly tart black cherry and black berry fruits accented by tobacco, tea, cigar box and leather on a short modest short finish." Perhaps bottle variation relative to tonight's tasting?

Posted by UnwindWine at 9:52 PM No comments: Links to this post 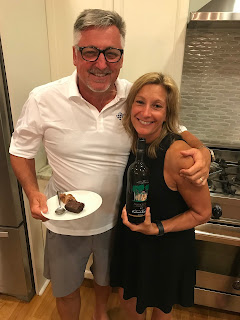 A wonderful close knit family, it is only fitting their signature wine is not only a whimsical namesake, but also sourced from a family winery with vineyards named for their offspring.

Frank Family Vineyards estate up in Calistoga is housed in an 1884 stone cellar—the third-oldest building in Napa Valley.  They did a massive renovation of the original Kornell Champagne Cellars and the 19th-century Larkmead before that. The site is one of the most beautiful and interesting in Napa Valley. Ironically, it is one of the first wineries we visited during our very first Napa Valley wine visit back in the seventies!

The winery and tasting room were totally reimagined a few years ago for their 25th anniversary. The Hollywood Room is a tribute to founder Rich Frank, past president of Disney Corporation and wife Leslie’s career as an Emmy award-winning broadcast journalist and Hollywood reporter. On display are the couple’s two Emmys. Frank is known as one of the guys who green-lit Aladdin and The Lion King, but it’s Frank’s penchant for hospitality, not his Hollywood credential that is behind Frank Family Vineyards being named “Best Napa Winery” eight years running by Bay Area A-List.

Frank Family flagship wine, Frank Family Patriarch Napa Valley Cabernet Sauvignon 2014 ($225)  was named one of the world's 30 best wines according to Vivino’s latest 2019 Wine Style Award, which celebrates the best 1,640 wines across 164 different styles based on 40 million reviews and 120 million ratings on the wine app and website.

This is a Bordeaux Blend of 86% Cabernet Sauvignon, 9% Merlot, 4% Petit Verdot, and 1% Cabernet Franc, all sourced from the Frank Family Estate vineyards.

The 206 acre S&J Vineyard is located east of the Vaca Mountain range in Napa’s Capell Valley. Purchased in 2000, it is named for Darryl Frank’s children, Stella and Jeremy. It is planted to 58 acres of Cabernet Sauvignon, along with 9 acres of Petite Sirah and 9 acres of Zinfandel.

The Benjamin Vineyard is located east of Conn Creek Road in the heart of the Rutherford AVA,  acquired in 2012, it is 87-acres formerly known as Wood Ranch, and was renamed for Paul Frank’s son. It is planted with 50 acres of Cabernet Sauvignon, 8 acres of Petit Verdot, and 2 acres each of Zinfandel, Cabernet Franc, and Merlot.

Posted by UnwindWine at 9:00 PM No comments: Links to this post

During my trip to New York, I stopped in Ambassador Wine and Spirits at Second Avenue and 54th Street and met Louis Phillips, President and owner. he took me on a tour of the lower level cellars where there are showcase rooms dedicated to French wines from Bordeaux, Burgundy and Champagne. There is also a section on cognacs and armagnacs, dessert wines and other specialities. 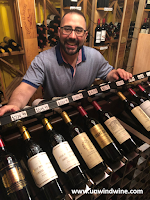 Also downstairs is Ambassador's tasting room which serves as Louis's classroom, laboratory, office and library. He had the room set up and was preparing for a wine class and tasting that evening.

The Ordre des Coteaux de Champagne is the official fraternity of the major Champagne brands of France. Its mission is to promote the variety, versatility, taste and other unique characteristics that make Champagne wines synonymous with success and celebration everywhere.

The Ordre des Coteaux organizes Chapters, tastings and other activities, spreading the message of the Comité Champagne worldwide through a network of committed supporters who are drawn from all parts of the world – professional restaurateurs and sommeliers, famous connoisseurs, people in show business, politics and the media.

Established in 1656 by aristocrats in the court of French King Louis the XIVth, the Ordre des Coteaux de Champagne is responsible for managing a global communications policy of essential information concerning the wines of Champagne, France through a worldwide network of highly-knowledgeable staunch supporters. These individuals are prudently chosen from all over the globe and include renowned restaurateurs, sommeliers, connoisseurs and international personalities in politics, media, stage and screen.

Gregarious Louis is a wealth of knowledge on wines, vintages and labels from around the world. He has entertaining and informative stories on winemaker producers, their personalities, their wines, heritage, handicraft and special release products.

We talked about my recent visit to South Africa and our respective discoveries and experiences with Pinotage. He gave me a bottle of Pinotage to try and suggested several more. 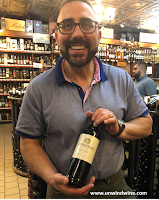 We discussed my upcoming trip to Bordeaux and his insights and suggestions for estates, and then talked extensively on his selection of my favorite Bordeaux labels across the various vintages and several other label discoveries new to me.

Ambassador has an extensive collection of domestic wines and from around the world and a knowledgeable staff to help with your selection. If you're lucky, you'll meet Louis Phillips who will educate, entertain and inform you with his wealth of knowledge and gregarious elucidation.

When in New York, stop in Ambassador and enjoy the experience and pick up a bottle of a new discovery something unique for sipping, collecting or serious drinking for a special occasion.

Tonight we'll be tasting one of the discoveries that I picked found there.

Posted by UnwindWine at 7:55 AM No comments: Links to this post