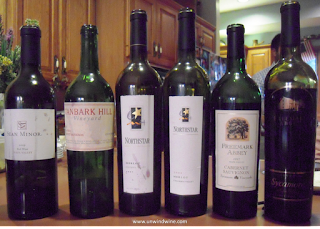 For a gala family reunion dinner celebrating sister Jan's visit from So-Cal and Alec's visit home from Real-Whirled, Ryan and Michelle brought a Philip Togni Tanbark Hill Cabernet Sauvignon 2009. Bill and Beth dropped in with a Freemark Abbey Sycamore Vineyard 1997, so we trolled the cellar and pulled out a Freemark Abbey Sycamore Vineyard 1999 to match and compare. All this whilst we were doing a comparison tasting of the Northstar Columbia Valley Merlot 2007 and 2008. We also opened and tried a Sean Minor Napa Valley Red Wine 2009.

I chronicled the Northstar Columbia Valley Merlots 2007 and 2008 in my preceding wine journal posts of Friday night and earlier tonight. 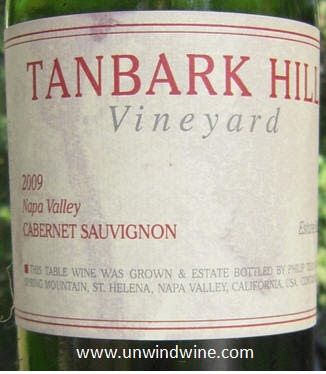 Philip Togni second wine selected from the barrels that don't go into the flagship Estate wine.

Philip Togni has an impressive track record with Napa Valley Cabernet Sauvignons dating back to 1969 at Chappellet. He has a reputation for consistently producing high quality wines at reasonable prices. Phillip Togni, his wife Birgitta and daughter Lisa produce Margaux-type wines consisting of a blend of Cabernet Sauvignon, Merlot, Cabernet franc and Petit Verdot.

A remarkable major recent tasting achievement occurred in Brussels where a most noted professional panel in the country ranked Phillip Togni Cabernet Sauvignon 1990 above eleven other Bordeaux and California Cabernets of 1990 including Latour, Margaux, Haut-Brion and Mouton Rothschild.

Exploring a new discovery, we tasted Sean Minor Napa Valley Red Wine 2009 from American Canyon down at the bottom of Napa Valley below the City of Napa on the eastern side, opposite Carneros on the West. 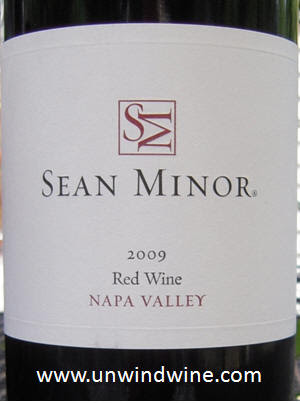 Interesting wine from upstart emerging producer Sean Minor who followed his dream and love of wine into the business with wife Nicole after they discovered, as newlyweds, their second largest expense was wine!

Dark purple inky color, medium to full bodied; a bit of an edge takes away from the black berry fruits adding a slight astringent tone, hints of oak, spice and cassis give way to a moderate tannin lingering finish. 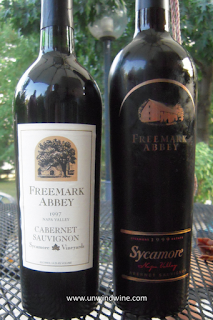 Mini vertical of two vintages of Freemark Abbey Napa Valley, Sycamore Vineyard Cabernet Sauvignon 1997 and 1999. We pretty much predicted the outcome of this tasting before we started but it was an enjoyable and worthwhile experience in any event. Freemark Abbey partners with Sycamore Vineyard  to source the fruit for this wine from vineyards located at the foot of the Mayacamas Range at the cusp of Rutherford and Oakville.

We visited Freemark Abbey over the years with our most recent visit in 2009, with Bill and Beth, highlighted by a cellar library tour and tasting. We purchased library bottlings of the '74 and '78 vintages, our anniversary years, that we took to a gala anniversary celebration dinner at CIA Greystoke Manner.

The 1997 rear label cites a remarkable three years aging in French Oak and it shows from the outset. The Cabernet Sauvignon is blended with Cabernet Franc and Merlot for complexity and balance.

The '97 had a base color of garnet with a slight rust hue while the '99 was more deep dark purple as its base color.

This evening, the 1997 started out a slight bit closed and tight yet revealed from the beginning a leathery tone and predominant layer of oak that increased during the evening. An initial edge burned off giving way to the predominant oak with blackberry and black cherry fruits, tobacco, clove spice and hints of what some call 'forest floor' and a hint of dark mocha on a moderate tannin finish.

The 1999 shows a new packaging design with a painted bottle as opposed to the traditional paper label, as shown. Like the '97 it also displayed slightly subdued fruits although not as tight as the '97 and the oak was less pronounced, although also sharing the hints of tobacco and spice.

Both wines softened and revealed more complexity and depth over the course of the evening with the '97 being more pronounced in each frame.

Bill has another '97 and I have another '99, and Bill also has a  bottle of the '98, so stay tuned for our next vertical tasting when we'll compare all three vintages together!

Posted by UnwindWine at 9:02 PM No comments:

Following yesterday's tasting of the 2007 Northstar Coumbia Valley Merlot, I went back to Binny's (the Chicagoland beverage super store) to buy more of this closeout vintage. Not until I got up to the checkout did I realize I had the 2008 release.This afforded the opportunity to extend our vertical another year (Northstar Journal Notes Index), but more fortuitously, to conduct a comparison tasting since I still had half a bottle remaining from the previous evening.

The Northstar Columbia Valley Merlot 2008 exhibited much the same consistent  characteristics of the earlier vintages - inky purple color, forward black fruits, full bodied, firm tannins,  and it also had a tone of slight astringency indicative of its youth. The 2008 did not possess that sweetness of the tones of the toffee chocolate layer of the 2007, but it did finish with the layer of lingering oak and spice. I give the '08 a rating of 91 points, consistent with many years, but falling off one point from what I considered the exception 2007.

Posted by UnwindWine at 8:25 PM No comments: