B Side Napa Valley Cabernet Sauvignon 2012

B Side Napa Valley Cabernet Sauvignon 2012

They source grapes from vineyards all over California’s appellations and beyond, claiming this enables them to be free to explore the best quality fruit that each vintage has to offer. As I've written here time and again over the last year, the negociant supply model provides the opportunity for imaginative, high QPR wines. But on the flipside, (no pun intended here), since they don't own or control the source of the fruit, they can be prone to 'one-hit wonders' (pun intended) with a blockbuster release one year, but when its gone it may be done, with no chance for a repeat. Since the wine could be sourced from different places each year, it's potentially the opposite of terroir, the association of wine to a particular place, and all the elements of soil, micro-climate, elevation, sun exposure and so on that give that site an identity reflected in its produce.

I've written much about branding here recently. The branding concept here is based on the old vinyl records that were the means to release and distribute music from the early 1950s through the '70's. Popular records were the two-sided '45'. The "A" side contained the featured hit song of the release, while the "B" side was sometimes 'filler', or an additional release to fill out the record. But once in a while, the 'B' side was as much a hit as the leader, often the real find, frequently revealing an undiscovered gem.

B Side wines play on this metaphor or concept and likens the A Side to the  A-list world of Napa Valley wines from the prominent prestigious properties on main street Napa Valley, along mainstream Highway 29 and Silverado Trail. B Side writes, "Hailing from Napa's "flip" side, B Side reds are crafted with grapes sourced from the slightly-off-the-beaten-track vineyards along the valley's eastern hillsides. They're authentic originals: a little experimental and unexpected, crafted and perfected behind-the-scenes for those with a penchant for discovery."

"The grapes comprising our two B Side offerings come from the "flip" side of Napa: vineyards tucked into the benchlands, slopes and hillsides of eastern Napa Valley near the scenic Silverado Trail."

They claim the majority of this blend comes from "selected vineyards in Oak Knoll, Calistoga and Yountville. Due to the warmer weather in Calistoga and Yountville, the fruit picked here adds impressive depth and flavors to the wine. The Oak Knoll district is ideally situated near Los Carneros, allowing for early morning fog, cool nights and extended hang time, all of which play a major role in developing smoothness and concentrated color. The vines are nearing 20 years of age in most of these blocks and have provided for a near perfect harvest of Clone 7 Cabernet Sauvignon this vintage."

Therein lies the negociant's challenge. Do they have rights to the follow on vintage (s) of this wine? Can we expect a release next year? Or is this a one hit wonder? And when will we know? So don't get too invested in this and treat as a single release, and stay tuned for what happens next. In fairness, this is their third release of B Side Napa Cab, but its not clear if they're all from the same source, or not. In any event, enjoy a good value, high QPR interesting release Napa cab while it lasts. 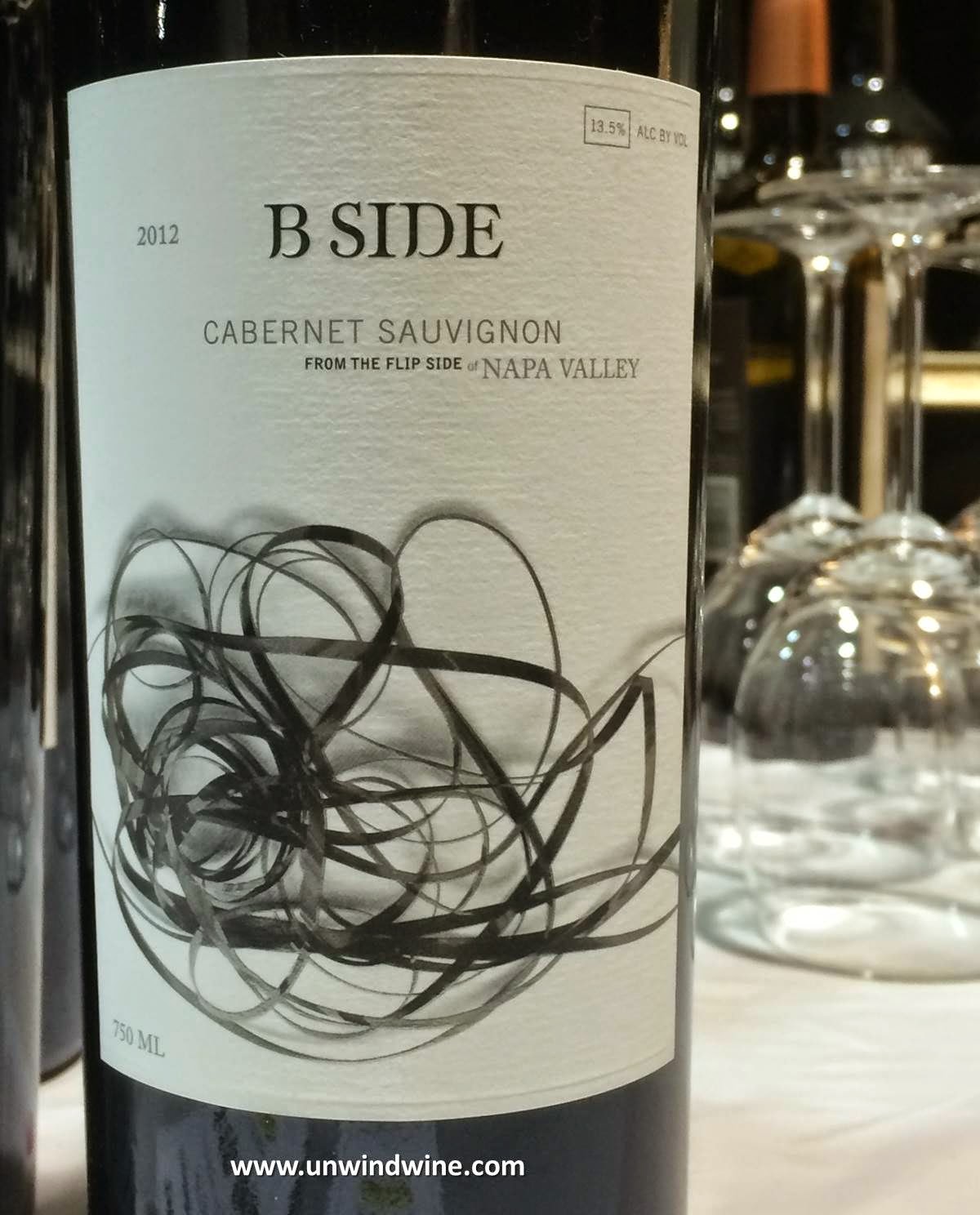 This B-Side Cellars Cabernet  contains 6% Petit Verdot and 4% Merlot to round out the blend to add complexity and aromatic intrigue. The wine was aged in 80% French oak for 14 months before bottling.

From the winery: "Our beautifully crafted 2012 B Side Cabernet Sauvignon is pure, rich and deep, featuring aromas of blackberry, sweet tobacco leaf and notes of warm caramel. This wine is marked by a distinctively complex and subtle mix of black currant, toasted almond and anise, with a supple core of cherry and dark chocolate flavors. Full-bodied and mouth filling, the wine shows tremendous dimension with a seamless finish that lingers throughout the palate." They say this 2012 bottling has yet to be professionally reviewed, but the 2011 vintage garnered 90 points and an "Editors' Choice" designation by Wine Enthusiast.

The flagship B Side Napa Valley Cabernet Sauvignon is dark inky garnet colored, full-bodied with black berry and black raspberry fruit flavors with tones of graphite and tobacco with a hint of mocha on a finish of moderate lingering tannins.

http://bsidewines.com/
Posted by UnwindWine at 6:40 PM No comments: Links to this post

While we don't drink a lot Zinfandel, its a must have in every cellar for every day pizza wine as well as for occasions of hearty pasta or Bar-B-Q. It's also a bold expressive fruit filled wine that will appeal to and resonate with novice or less sophisticated wine drinkers. Also, Zinfandels typically offer early gratification and are ready to drink upon or soon after release. While some are ageworthy, they typically can be consumed when young and don't need aging to evolve and reveal their greatness or true character potential. Lastly, Zinfandel tends to offer perhaps the most bang for the buck or QPR - Quality-to-Price ratios than most other American varietals. I say American varietals because Zinfandel is perhaps more indigenous to American than perhaps any other grape.

Only recently with the emergence of and maturation of the development of South American wines from Chile and Argentina made from Malbec, and more recently from Bordeaux varietals, has there such a range of moderate priced big reds for every day drinking, a place long held by Zinfandel.

But, not all Zinfandels are simple and unsophisticated. A few producers specialize in Zins and have made them an artform in their own right. Ridge is probably the best known and most widely distributed of the Zin zealots. This Lytton Springs release, while marketed as a Zinfandel, is actually a complex blend of Rhone and South American varietals.

Ridge is one of the more prolific Zinfandel producers with a portfolio of almost a dozen premium, single vineyard designated and imaginative Zinfandel based blends that date back to 1964 when they released their first Zin. The history of Ridge Vineyards actually dates back before the turn of the last century, in 1885, when Osea Perrone, bought 180 acres near the top of Monte Bello Ridge down in the southern range of Santa Cruz Mountains that separate south San Francisco Bay from the Pacific Ocean at the top of Monterey Bay,  producing the first vintage under that name in 1892.

The first Zinfandel was made in 1964, followed in 1966 by the first Geyserville Zinfandel. By 1968, production had increased to just under three thousand cases per year, and in 1969, Paul Draper came on as winemaker. Today, Zinfandel and Cabernet account for most of the production with lesser quantities of Syrah, Grenache, Carignane, and Petite Sirah used primarily as part of the blends.

The first release of Ridge Lytton Springs Zinfandel from the property in the Dry Creek Valley in Sonoma County, was released in 1972. The property lies just north of Healdsburg on the benchland that separates Dry Creek from Alexander Valley. The Zinfandel vines at Lytton Springs date back 100 plus-years and are interplanted with Petite Sirah, Carignane, a small amount of Mataro (aka Mourvèdre), and Grenache for blending. Hence Ridge Lytton Springs is a complex blend with the prime core being Zinfandel. 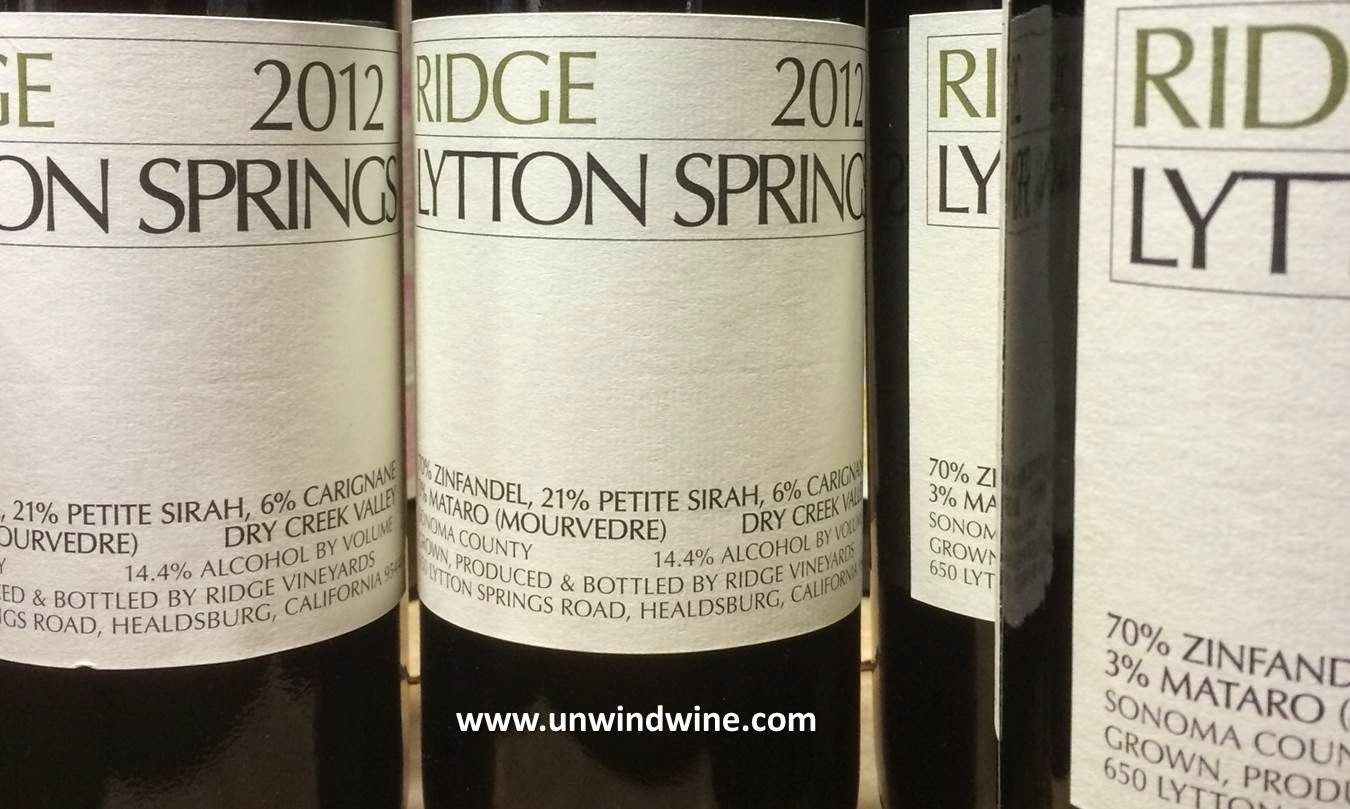 http://www.ridgewine.com/
Posted by UnwindWine at 5:11 PM No comments: Links to this post