http://cellartracker.com/w?358922
Posted by UnwindWine at 2:24 PM No comments: Links to this post 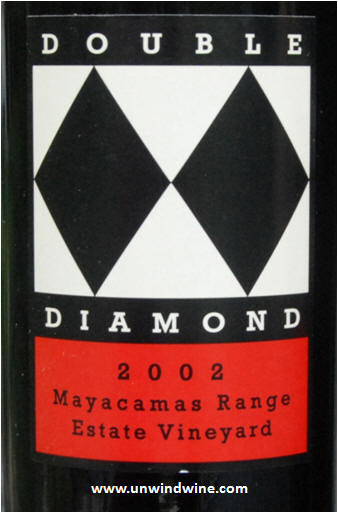 
Comparison tasting of 2004 'horizontal' - wines from the same vintage - Bordeaux and Silver Oak Alexander Valley reveals a study in terroir, styles and aging profiles. Wines tasted are below, shown in tasting order based on anticipated weight and complexity which proved to be appropriate: 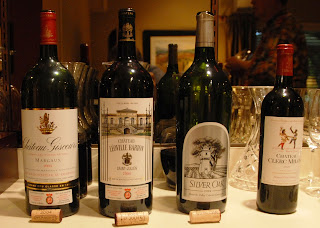 The Giscours, Leoville Barton, and Silver Oak were poured from magnums and decanted three to fours hours earlier.

The highlights of the evening for me were the Leoville Barton and the Silver Oak which were both bright, complex, smooth, polished and flavorful indicating peak readiness to drink in their seventh year despite very different styles and tasting profiles. Not surprising, contrasting the Leoville Barton was the Clerc Milon which while balanced and full was still a bit closed and tight revealing a longer aging profile needing more time to open and fully reveal itself. The Giscours was next in my rankings followed by the d'Armailhac. 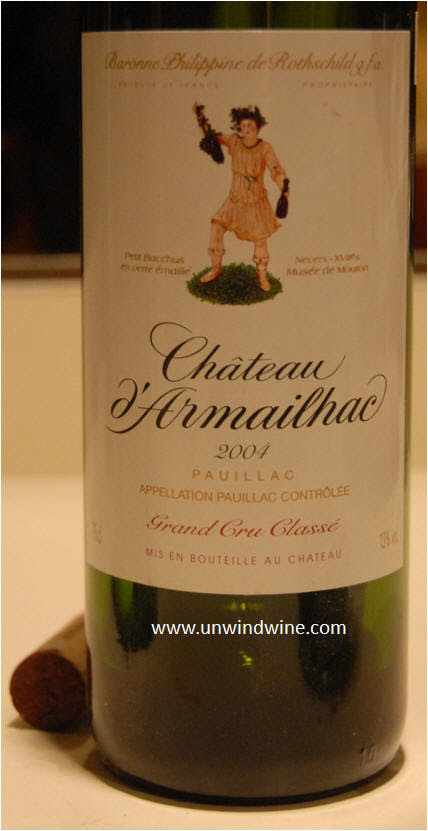 Third label of esteemed Chateau Mouton Rothschild, behind second label Clerc Milon. Medium-full bodied, less complex and lacking the polish and integration of the others, a bit flabby but forward black berry and black cherry fruit flavors with a layer of  mocha, cedar, and hint of camphor on a slightly firm spicy and acidic finish.
RM 87 points.


Terroir - from Wikipedia - Terroir comes from the word terre "land". It was originally a French term used to denote the special characteristics that the geography, geology and climate of a certain place bestowed upon particular varieties. Agricultural sites in the same region share similar soil, weather conditions, and farming techniques, which all contribute to the unique qualities of the crop. It can be very loosely translated as "a sense of place," which is embodied in certain characteristic qualities, the sum of the effects that the local environment has had on the production of the product. Terroir is often italicized in English writing to show that it is a French loanword. The concept of terroir is at the base of the French wine Appellation d'origine contrôlée (AOC) system that has been the model for appellation and wine laws across the globe. At its core is the assumption that the land from which the grapes are grown imparts a unique quality that is specific to that region.
Posted by UnwindWine at 6:44 AM 1 comment: Links to this post 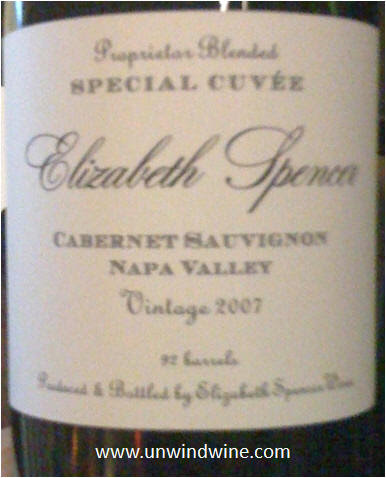 Hot - high alcohol taste - almost as if fortified w/ cognac - overpowering the black cherry fruits, with layer of mocha and spice. Tasted by the glass at 'fyve' (ala five as in Pentagon) at Ritz Carlton Pentagon City, Arlington - perhaps open too long? Or kept too warm?

Posted by UnwindWine at 5:20 PM No comments: Links to this post

A reliable producer that provides consistent value year after year - especially so in the highly rated 2005 vintage. My best of tasting pick from an earlier Bordeaux flight tasting. Medium bodied, floral perfume, flavorful red berry, plum fruits, subtle spice, cherry-cranberry, nice texture and an appealing moderately firm grip of tannin in the finish.
RM 91 points.
Posted by UnwindWine at 6:27 PM No comments: Links to this post

http://www.cellartracker.com/wine.asp?iWine=317099
Posted by UnwindWine at 6:32 PM No comments: Links to this post

One of the ultimate wine tasting experiences besides actually visiting wine country is Wine Spectator's annual/bi-annual* Grand Tour - a wine tasting extravaganza of over two hundred producers. While its not a substitute for visiting wine country, it is an opportunity to meet the winemakers or producer representative directly, rather than their local distributors, which is the case is most tasting events.

There is something for everyone from standard bearer First Growths to breakout producers and new vintage releases, some revealing the artwork of new winemakers. A highlight is discovering new emerging labels or established labels entering new markets. Such was the case with the 2011 Grand Tour bi-annual visit to Chicago. Again this year it was held at Navy Pier's Grand Ballroom.

* Most cities including Chicago host Grand Tour every other year.

Such a broad and diverse offering can be daunting. One can approach the challenge of so many choices several ways - look for new discoveries, focus on known producers' new releases, wander serendipitously or randomly, or some combination thereof. We develop a detailed plan of what producers we want to visit and then determine tasting based on what they are serving - avoiding lackluster features and offerings we've already experienced. Our tasting route follows countries and regions that we know and collect - no room for experimentation in our plan.

Tasting so many wines in one evening quickly overwhelms the palate so we taste wines with which we have previous experience or familiarity. Lack of or diminished palate discrimination hinders wandering into new realms.We also focus on the more complex sophisticated wines early and move to the bigger, 'narrower' wines from there. You probably figured out by now - we taste reds and don't spend time on whites at such an event - the sole exception being Inniskillin Niagara Peninsula Riesling Icewine 2007 which was according to plan.

We tend to focus on our selections and not be tempted to venture off plan otherwise one will never get through their preference list. We've been very diligent in keeping to our plan over the years although we deviated moreso this year than previously due to the size of our group.

Our preference list was only fifteen  percent of those available which is still thirty wines. I hit all but the most of the last half dozen which were ports as I ventured off and did explore some discoveries in chosen categories, such as the Aussie Shiraz's mentioned below, for example.

The first growth Bordeaux features were Chateau Mouton Rothschild serving the spectacular 2005 vintage and Chateau Margaux pouring their 2004. We started with these as the chance to taste First Growth Bordeaux wines is a special occasion and valued experience. A Pauillac comparison was available with the Lynch Bages 2005, and the Pontet Canet 2008. Margaux was best represented of the Bordeaux appellations with Chateau Margaux, Chateau Palmer 2004, Brane-Cantenac 2003, Du Tertre 2005, and Giscours 2005. St Estpehe was represented by long favorite Cos d'Estournel. Standouts from the Bordeaux' besides the Mouton were Lynch Bages, Brane-Cantenac and  the Cos d'Estournel. Conspicuously modest and subdued was the Chateau Margaux '04 - perhaps too young to reveal itself.

Consensus highlight of the 'Big Cab' offerings was the Joseph Phelps Insignia 2006 with its rich chewy forward fruit and complexity. Notable entries were Niebaum-Coppola Rubicon '06, Beaulieu Vineyards Georges De Latour '07, Cliff Lede Poetry '07, and Beringer Private Reserve 2007 Cabernet Sauvignons. We passed on the Robert Mondavi Reserve Cabernet, Chateau St Jean Cinq Cepages and Etude. A new release offering that showed well was Gemstone Vineyards Yountville Ten (10th Anniversary Release) 2006 which is now made by Phillip Melka. The consensus underachievement was the Caymus Special Select 2008 as I was alone in our group to give it high marks.

We overlooked and missed the 2007 HALL "Exzellenz" Sacrashe Vineyard Red Wine ($165) not recognizing yet another new label, which was unfortunate given her recent spectacular releases of her Kathyrn Hall label. We skipped the Provenance having just recently enjoyed their 2007 Cabernet (perhaps their best to date).


The Grand Tour remains a highlight of our tasting experiences each year. At $200 it is not for the every day casual wine drinker or those content/satisfied to drink modest wines. For those looking to test their palate discrimination, to explore a wide variety or broad selection of wines, then the tour offers just that. of course there are many wine tasting opportunities out there that are less extravagant. With so many selections, care must be taken to pace, spit, and cleanse - not drink/taste too much too fast, spit rather than drink (swallow) if you're looking to taste more than you would normally drink, and rinse and cleanse your palate with the furnished water, bread, or crackers regularly to maintain any sense of discrimination.

This year,  based on lessons learned in years past, we ate just before arriving which reduced the distraction of the institutional buffet food., and time taken from the wines. As we're not getting younger and some have bad knees, next year we'll absolutely have to pre-arrange for transportation back to the hotel - and as such we got hotel rooms in the city to simplify getting home at the end of the long evening. All that said, we're 'All-In', looking forward to the next Grand Tour, which regretably but also thankfully is at least a year away! 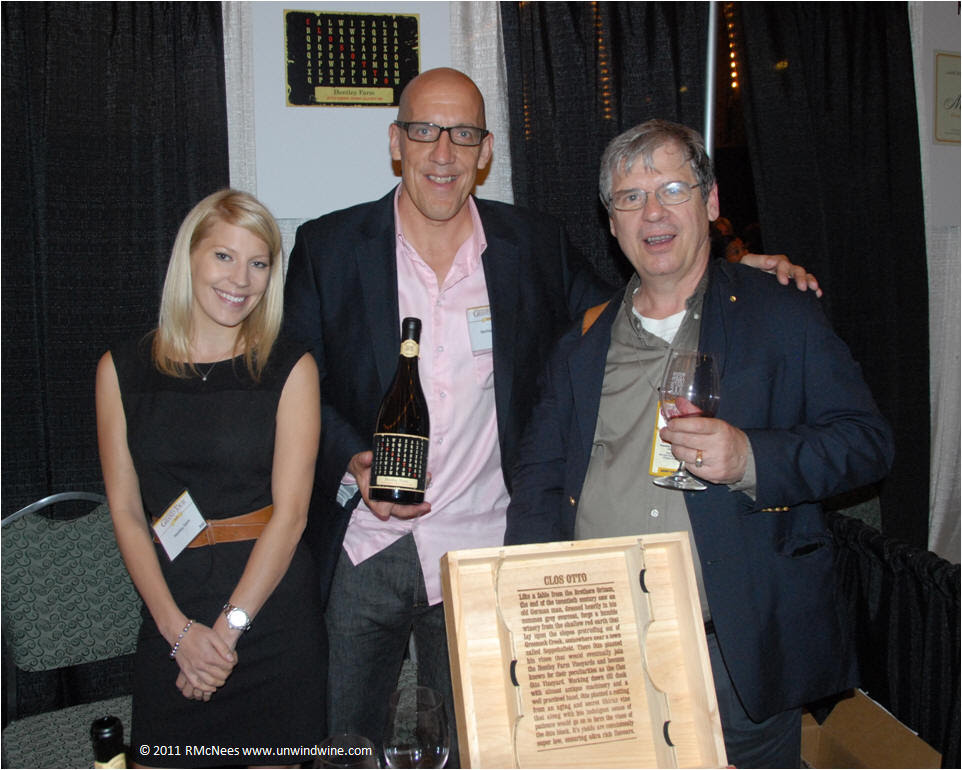 Posted by UnwindWine at 6:49 PM No comments: Links to this post 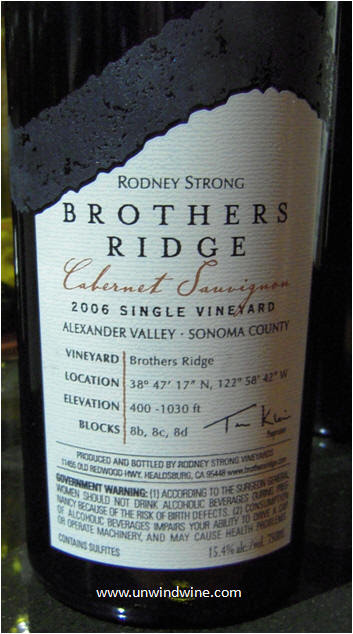 We've long known Rodney Strong Cabernets and Symmetry Meritage wines and especially enjoyed their recent vintages of Reserve Cabernet Sauvignon. It was a pleasant surprise to discover their new single vineyard designated Brothers Ridge Cabernet Sauvignon, 2006, from a 140 acre property in the hills near Cloverdale, Sonoma County Alexander Valley. I deemed this best in class of this tasting. 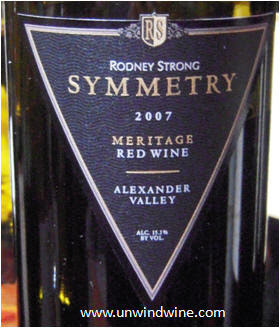 Another new discovery of the tasting was Hoopes Family Estate Napa Valley Oakville Cabernet Sauvignon 2007. Dark color, full bodied, firm, intense and complex blackberry, black cherry and black raspberry fruits with a layer of spice, leather and tobacco box on a firm tannin lingering finish. This would be a great accompaniement to hearty cheese or grilled steak. RM 92 points.

A good benchmark to measure these wines against was the Beringer Private Reserve Cabernet Sauvignon 2007.  Dark ink color, full bodied, complex and sophisticated dark berry fruit with hint of  cassis, licorice, touch of smoke and mocha on the long lingering finish. RM 92 points.

Robert Parker gave the Beringer 95 points, revealing his more sophisticated palet that likely apprecated the complex sophistication of this wine, while I tended to favor the more forward perhaps narrower but deeper cabs above. 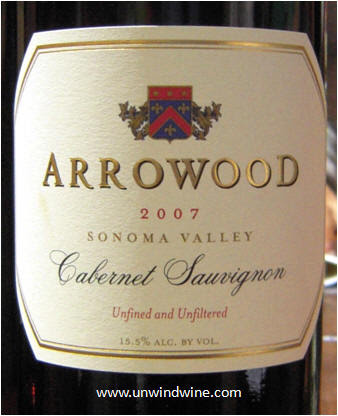 Arrowood Sonoma County Cabernet Sauvignon 2007. This wine was more subdued and almost delicate compared against the 'big'hitter's' above.

From vineyards near the lower Sonoma Valley hillside winery, this 100% Cabernet Sauvignon exhibits predominant black berry and black cherry fruits, a hint of cassis, toasty oak and a touch of mocha on the soft finish. RM 89 points.

Kudos and thanks to Malloy's Finest Wine and Spirits in Lisle for hosting this quality event.
Posted by UnwindWine at 9:23 AM No comments: Links to this post 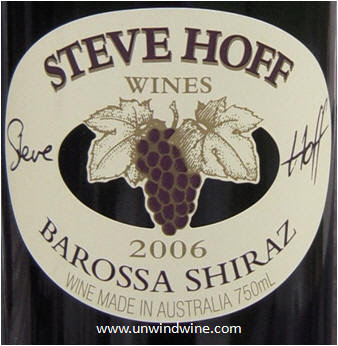 This is as good as their higher priced select shiraz at a fraction of the price. Great compliment to hearty meats, cheeses, dark chocolate - Deep dark purple color - full-bodied, ripe and rich layers of deep blackberry, plum and anise, hints of blueberry and black cherry with a long lingering fine-grained tannin finish. RM 90 points.
Other reviews -

92 pts Robert Parker Jr.'s The Wine Advocate (JM) - It is opaque purple-colored with an enticing perfume of smoke, meat, bacon, and blueberry. This leads to a full-bodied, plush, ripe, layered wine with gobs of savory fruit, well concealed tannin, and superior length. This in-your-face Shiraz will drink well for a decade.

91 pts Wine Spectator
Ripe and rich, with deep blackberry, plum and licorice flavors mingling for effect as the finish rolls on, finishing with fine-grained tannins.
90 pts Stephen Tanzer International Wine Cellar (JR)
Ruby-red. Powerfully scented bouquet of cherry and blueberry preserves, smoked meat and dried flowers. Fleshy dark fruit flavors are weighty and velvety, with fully absorbed tannins and a late-arriving spicy quality. This is all about fruit and is already delicious, but it has the concentration and balance to reward cellaring for a few years.
Posted by UnwindWine at 3:11 PM No comments: Links to this post

http://cellartracker.com/w?727918
Posted by UnwindWine at 5:18 PM No comments: Links to this post