I picked up the latest available release of this label in preparation for our visit to the estate in our upcoming trip the end of this month. We visited Vieux Télégraphe during our trip to Châteauneuf-du-Pape in the Southern Rhone River Valley back in 1998 and are eager and looking forward to return. We hold Vieux Télégraphe wines dating back to the early 1980's.

Domaine du Vieux Télégraphe has been run by the Brunier family for five generations dating back to 1891. The estate’s vineyards average 60 years of age on the Plateau of La Crau, a site known for growing Châteauneuf-du-Pape grape varietals.

Châteauneuf-du-Pape AOC appellation rules allow a combination of thirteen different grape varietals to be included in the blend. CDP wines are also known for their famous 'crossed keys' in the bottle above the label as shown on the right.

The estate is named for the telegraph towers that sat on the site dating back to the early visual signal towers that were invented and deployed as far back as 1792. Lines of relay towers were built within line-of-sight of each other at distances of 5–20 miles. Tower operators would watch adjacent towers through a spyglass for signals produced by mechanical shutter arms and would pass the message on to the next tower. These early systems were faster and less expensive than horse drawn riders. These lines were a precursor of the electrical telegraph which would replace them half a century later.

At the end of the Second World War, fourth generation Henri Brunier revived the estate enlarging the Domaine to 136 acres, and developing the classic “Vieux Télégraphe” Châteauneuf-du-Pape brand and style of wine with its full dimension and minerality. His son's Frédéric and Daniel have been tending to the family business since the earlyl 1980's. They now farm 247 acres in the Châteauneuf-du-Pape AOC area, and 49,5 acres of IGP Vaucluse and AOC Ventoux vines.


The estate wines are known for their distinctive terroir signature of predominant minerality from filtering through the thick layer of large pebbles left behind when the Alpine glaciers melted, long before the Rhône Valley formed. 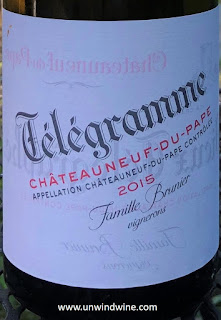 This is the second label of Vieux Télégraphe. It is a blend of Chateauneuf varietals - 80% Grenache, 10% Syrah, 6% Mourvèdre, and 4% Cinsault, from vines that average 30 years of age.

Posted by UnwindWine at 7:27 PM No comments: