I opened this simple, pleasurable light drinking wine before dinner for sipping out on the deck over the course of a delightful spring evening.

Sauvignon Blanc is one of the purest most natural easy sipping wines which we try to keep on hand for such occasions. 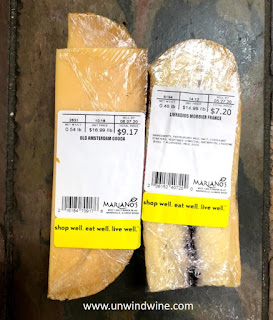 I later opened it to try with some artisan cheeses Linda brought home from the cheese department at the local Mariannos. It proved to be a nice pairing with a French Morbier.

Morbier-style cheese comes from the highest part of the Jura Mountains in a small farm village in the Franche-Comté region. It dates back to the 19th century when producers of Comté cheese decided to make a smaller cheese from the day's leftover curd for their own consumption.

Morbier has an ivory colour and is soft and fairly elastic. It is immediately identifiable because of its black layer of tasteless ash, which separates horizontally in the middle. The Soot is thrown on top in order to prevent a rind from occurring.

This fruity, creamy Livradois is produced from cow's milk, French Morbier cheese matures for 6 weeks before it is ready for sale.

The Winemaker writes about this label, "This Estate Sauvignon Blanc is a blend of several blocks planted at 900 ft. elevation. It displays everything one would expect from Sauvignon Blanc grown at altitude in rock-driven soils: exotic fruit character grounded by serious textural and structural components."

The rear label states this was sourced from the Couger Ridge blocks in the Alexander Valley, Sonoma County. It says this was grown, produced and bottled by Stonestreet in Healdsburg. Labeled as Estate means the grapes were sourced from the producer's own vineyards.

Wine Enthusiast wrote, "Stonestreet consistently delivers complex, refreshing renditions of Sauvignon Blanc. Grassy on the nose, with an exotic tease of pea shoot, it seemingly vibrates on the palate with lemon, grapefruit and apricot flavors."

Straw colored, light medium bodied, this was bright notes of pineapple, peach with accents of grapefruit and green apple, hints of passion fruit and pear on the tangy finish.