Tablas Creek Vineyards is a joint venture between two internationally renowned wine families: the Perrin family, proprietors of the legendary Château de Beaucastel in Châteauneuf-du-Pape, and the Haas family of the leading importer Vineyard Brands.  Together they developed vineyards in western Paso Robles where they grow and produce Rhone River varietal wines based on Viognier, Grenache Blanc, Marsanne and Rousanne including this Estate bottled label. 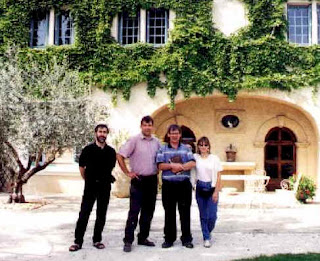 Robert Haas is known for his work in the American wine industry for over half a century, beginning as a buyer for his family's New York wine merchant retailer M. Lehman starting in the 1950s. His travels to the cellars of France forged lifelong relationships with premier wine producers such as the Perrins.

In the mid-1960s, he set out on his own to import fine estate wines from Burgundy, Bordeaux and the Rhône Valley, where he met the Perrins. He convinced family patriarch Jacques Perrin to appoint him exclusive American importer. Working with Jacques' sons Jean-Pierre and Francois Perrin, they established Beaucastel as one world's leading estates and well known brands.

They were convinced that the Rhone grape varieties, well suited to the sunny south of France, would thrive in California's Mediterranean climate. In 1985, they began looking for property to develop, searching for a close match to the climate and high pH soils of Château de Beaucastel.

In 1989, they purchased a 120-acre parcel twelve miles from the Pacific Ocean in what is now the Adelaida District west of Paso Robles. They named the property Tablas Creek Vineyard after the small creek running through the property. The Tablas Creek property terroir elevation, soils and climate are similar to those at Beaucastel.

Wines produced in Chateauneuf-du-Pape in accordance with the Appellation Controlle regulations can consist of thirteen different grape varieties, with another eight approved in the Côtes du Rhône appellation. Initially, Tablas Creek focused on nine key varieties of wine grapes of the Southern Rhône for their Paso Robles estate vineyard: Mourvèdre, Syrah, Grenache, and Counoise for the reds, and Roussanne, Marsanne, Grenache Blanc, Viognier, and Picpoul for the whites.

In recent years, they have imported seven additional grape varieties, with the goal of having the complete Chateauneuf du Pape collection: Clairette, Bourboulenc, Vaccarese, Cinsaut, Picardan, Muscardin, and Terret Noir.

Tablas Creek actually imported vine cuttings of Mourvedre, Grenache, Syrah, Counoise, Roussanne, Marsanne, Viognier, Grenache Blanc and Picpoul Blanc from the Beaucastel estate. In 1992, they planted rootstock fields and built greenhouse facilities to propagate and graft the cuttings. The resulting grapevines were planted in their estate vineyards beginning in 1994. In 1996, they began selling vines and budwood to growers through the Tablas Creek Nursery. Since then, they have sold nearly five million cuttings to more than 600 vineyards and wineries from California to Washington State to Virginia and Texas. 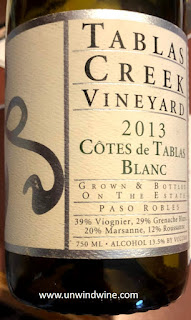 This release was awarded 90 points by Jeb Dunnuck of The Wine Advocate and Antonio Galloni of Vinous.

Winemaker notes: The wine, like most wines of the Southern Rhône, is a blend of varietals, featuring the floral aromatics and stone fruit of Viognier, the crisp acids and rich mouthfeel of Grenache Blanc, and the structure and minerality of Marsanne and Roussanne.

This was straw colored, medium bodied, creamy notes of citrus, floral, hint of lime and minerality.

Posted by UnwindWine at 12:44 PM No comments: