Meiomi gets its name from the native American Indian word for “coast” from the Wappo and Yuki tribes who lived along the central/northern California coasts in the early days. The Meiomi wine label began in 2002 with their release of Pinot Noir, in a quest to deliver reasonably priced good QPR (quality price ratio) easy drinking wines that are approachable and ready to drink while young. I've written often and regularly in this blog about the challenges of finding such a Pinot Noir. I've tasted the label several times but have never been moved to write of the experience, until now.

Now Meiomi has applied such principles striving to produce a respectable high QPR affordable Chardonnay. I think they've come closer to achieving that goal with this Chardonnay than with their Pinots.
Both are blends from reputable vineyard sites in three different California regions - Sonoma County, Santa Barbara and Monterey Counties. Such a blend, lacking a sense of terrior or place, without predominance from one site or another, therefor warrants the 'California' designation for its origin, although they don't use such in their branding.

Meiomi is the handiwork of fifth generation offspring from the legendary Napa Valley winemaking family. Founder and winemaker Joseph Wagner is the son of  Chuck Wagner, winemaker of Caymus Vineyards, who is the son and co-founder with principles Charlie Wagner and Lorna Wagner who started Caymus Vineyards in the early seventies. 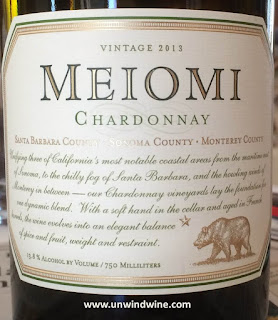 This is our first tasting of this label which is the second vintage release of Meiomi Chardonnay. This is surprisingly flavorful showing the essence of the Chardonnay descriptors of creamy and buttery in a nicely balanced pleasant drinking wine at a good QPR affordable pricepoint.

Butter colored, medium bodied, balanced acidity with tones of oak butter, hints of lychee fruit accented by citrus on a creamy finish. This is a blend of fruits that is 49% from Santa Barbara County, 30% Sonoma County and 21% Monterey County.

Posted by UnwindWine at 6:56 PM No comments: