Pulled this from the cellar for casual mid-week sipping with some artisan cheeses. This is a 100% Syrah produced by Chad Melville and winemaker Greg Brewer. It is a single stand alone bottle in our cellar and we have no history with this wine.

California's Central Coast Santa Barbara County is not an AVA, but a region just south of San Luis Obispo that includes the Santa Ynez Valley, Santa Maria Valley and Santa Rita Hills appellations. Wine has been produced in the area since the 18th century when Spanish missionaries planted vineyards. It wasn’t until the 1990s, however, that producers focused on growing premier grapes for fine wines. During the 1990s more than 10,000 acres of vineyards were planted, and today there are nearly 20,000 acres of vineyards.

The region gained recognition and prestige when the popular movie “Sideways” was shot there in 2004. Because the region is affected by maritime weather, it is relatively cool climate makes it ideal for Chardonnay, Pinot Noir and some Syrah. There are also some adventuresome new varietals being grown in the area and it will be interesting to see how they evolve in the coming years.


This label is from Santa Barbara County sub-appellation of Santa Rita Hills. It is an unusual east-west (or transverse) mountain range with close proximity to the cold Pacific ocean which brings consistent coastal fog, and steady afternoon breezes to create ideal conditions for growing 'cold-climate' Chardonnay, Pinot Noir, and Syrah.

Grower producer Ron Melville and his sons recognized these exceptional conditions and founded  Melville Vineyards in 1996 in the heart of the Sta. Rita Hills and has since become one of the most highly-regarded estates in Central California. Melville, a businessman, developed 82 acres of vineyards in Lompoc, in the western Santa Ynez Valley, then later purchased more land in Santa Barbara County. The winemaker is Greg Brewer, who is also co-owner of Brewer-Clifton winery. The estate has 139 acres of vineyard planted to Pinot Noir, Chardonnay, Syrah and Viognier. 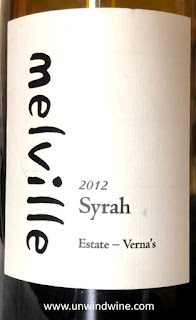 Under the direction of Head 'Winegrower', Chad Melville, Melville’s full-time vineyard crew manage the vines to produce small amounts of intensely flavored/concentrated fruit. At the time of harvest, they consider the wines to already be made, and strive to be minimalist in their path from vine into the cellar aging their wines only in neutral French oak and stainless steel and utilizing whole cluster fermentation to contribute to the depth, structure, and complexity of their wines.

This was highly rated at 94 points from Robert Parker's Wine Advocate who cited this as a highest QPR great value at this price point under $25 that he calls a "no-brainer purchase ....  some of the greatest values in the world of wine today".

The Winemaker's Notes - "Dark electric purple in color, with aromatics of molasses, blueberry compote, beef carpaccio and hickory bark coming through initially. On the palate, intense and savory notes of hoisin sauce, iodine and squid ink mingle with hints of eucalyptus, mustard flower and lavender. Texturally the wine is velvety and streamlined, finishing with both grace and precision."

Posted by UnwindWine at 1:25 PM No comments: