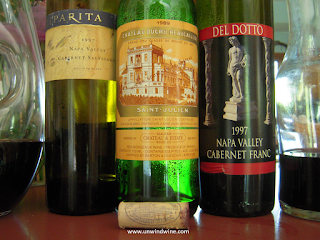 Chateau Ducru Beaucaillou is a wine of interest for several reasons. This was one of Ryan's 'signature' wines that we purchased in large format in his birthyear vintage, which we served at his wedding, and of which we still hold for special occasions. (This collection of large format birth-year wines was the basis for our cellar being featured in the Collecting section of Wine Spectator back in June, 2001. We still hold a double magnum of 1982 Ducru Beaucaillou that somehow survived several such occasions including weddings of Ryan and Michelle and Will and Kate C). While not Ryan's birth year, we still hold almost a case of this top rated 1989 vintage of this wine, since it is one year removed from son Alec's birthyear, and the year of dear friends and wine our OTBN group members Bill and Beth C, who are regularly featured in this blog.

The cork was perfect in this twenty-four year old, continued reminder and evidence that our cellar' conditions are ideal for aging. Decanted for about ninety minutes, this wine opened with a funky barnyard tone and Ryan was concerned it was tainted or beyond its drinking window. I preached patience and over the course of the evening it did burn off and turn into a emphatic floral tone that punctuated the finish and goes on and on and on.

Never-the-less, this wine may be showing its age as the berry and black cherry fruit has turned slightly astringent and a layer of tea, leather and tobacco seems to have emerged more predominantly. The tannins are moderate. The color remains intact with an opaque ruby color perhaps starting to take on an ever-so-slight brownish tone, while the body remains medium to light.

The slight astringency aside, as I look back, this tasting profile is consistent with my last tasting' note for this wine from October, 2011.

PS. Alas, the next morning, even the astringency had gone away and this wine was consistent with and reminiscent of earlier tastings albeit the slight leathery tobacco tone may be becoming more predominant over the fruit. Take note, this needs several hours of decanting.

This was a limited production upon release. This was one of our discoveries during our Napa Valley Wine Experience trips back in 1998 and 1999.and again in 2001 and 2003. I still remember we took this wine to a Christmas party back in 2000 and it was the stand-out highlight wine of the evening.

Dark ruby colored, medium to full bodied, the spicy black berry and black currant fruits are still vibrant in this sixteen year old, accented by tones of cedar and tobacco with hints of creme de cassis and leather on the smooth tannin finish. 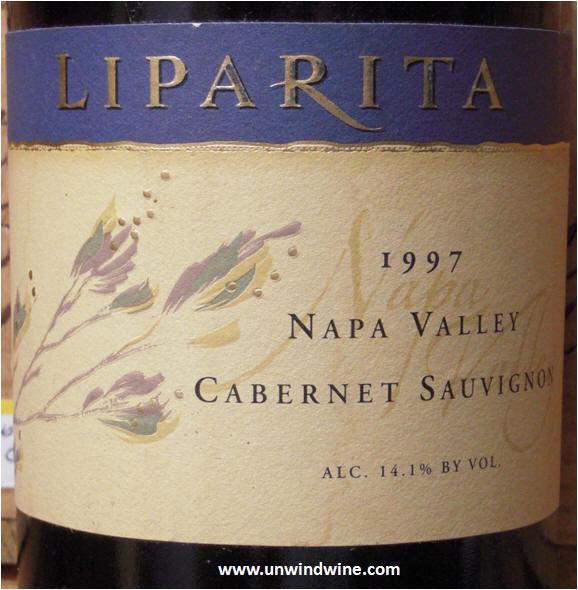 We have been drinking the 1996, 2000 and 2001 vintages of this wine from the cellar when we Ryan found a couple bottles of this '97 release. What a nice surprise as this is one more appealing and better drinking releases along with the 2001.

We discovered this wine during our Napa Valley Wine Experiences back in the late nineties highlighted by a barrel tasting at the custom crush facility down in Oakville with the then wine maker Gove Celia.

https://www.cellartracker.com/wine.asp?iWine=38567
Posted by UnwindWine at 11:44 AM No comments: Links to this post