Magic Door is a collection of Napa Valley or other regional wines sourced from various producers and marketed under the private branded label under the negociant portfolio also more widely known as Ninety-Plus Cellars. Of Magic Door, they write, "Magic Door is a collection of small-production wines from esteemed wine regions and acclaimed vineyards around the globe. All wines are selected by the wine team behind 90+ Cellars."

Ninety-Plus Cellars assign a 'Lot Number' to each label to identify that distinctive offering and to follow that label from vintage to vintage. They break from that convention here and as a result that method of tracking or following a particular source of product is lost.

If they set upon this approach to add clarity, they've achieved the opposite in their less precise branding. I can only imagine they did this to add a sense of cache or elan to the brand, a premium level vs. the standard Ninety Plus Cellars.

However, if that were their objective, why would they associate the new Magic Door branding with the old Ninety Plus Cellars? I'm paying attention, I am in the dark as to their strategy. Hopefully this will be clarified through further research, correspondence or disclosures.


Of the 2015 Magic Door Cabernet they write, "This full-bodied Cabernet comes from a top producer in one of Napa's most elite AVAs. We were able to put together a small allocation of this wine under the Magic Door label, and at a price point that's just a fraction of what the source winery sells it for. Napa Cab lovers: prepare to indulge." The same could be said for the 2017 release, yet one is from Rutherford and the other from Oakville. Go figure.

As I research this further in Cellartracker, which often is a source of vast data with their millions of bottles in the collective cellar inventory of more than a hundred thousand collectors, the confusion or lack of clarity regarding this label is even more than I alluded to or imagined. Cellartracker shows Magic Door Cabernet Sauvignon represented in thirteen different labels from eight different vintages from 2010 to 2017 from four different regions or appellations - Columbia Valley, Red Mountain, Oakville and Rutherford.

I hope and expect Ninety Plus Cellars and Magic Door endeavor to clear this up.

Once again, the charter and mission of this unwindwine.blogspot.com blog is intended and directed at situations just such as this, studying, researching, unpicking and sorting, and hopefully clarifying - unwindwine - branding, labeling, marketing and distribution.

This was dark garnet colored, medium full bodied, nicely structured blackberry and black currant fruits were accented by tones of mocha, cassis, hints of eucalyptus or cedar leading to soft smooth tannins on a lingering finish.

Ninety-Plus writes: "Oakville is one of the preeminent wine regions in America. It sits just north of the Yountville Mounts, a large hill which acts as a barrier to the cooling coastal influence of the San Pablo Bay. In Oakville, the wines made from Cabernet Sauvignon are less austere than examples made from grapes grown in Yountville to the south, but with more structure than wines made from fruit grown in Rutherford to the north."

This is from winemaker Ned Morris from Walla Walla, Washington. After college Ned moved to Australia to pursue a career in the wine business. From 1995 to 1997 he trained to become a sommelier at the highly regarded Penfold’s McGill Estate in Adelaide. He returned home to study at Oregon State University where he earned a Master’s Degree in Food Chemistry with a concentration on Fermentation Science as well as minors in biochemistry and microbiology.

While at OSU Ned worked as a cellar hand to Barney Watson at Tyee, gaining valuable experience with Oregon Pinot Noir. He returned to Walla Walla and worked at Abeja and after six vintages moved on to become Winemaker at Maurice Cellars where he produced his own high-end wines and began to establish his unique style of winemaking. Ned gained valuable experience in all facets of large-volume winemaking while working with Double Canyon, Canoe Ridge, and Basel Cellars. 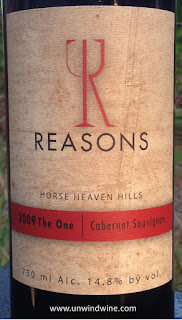 Morris eventually ended up at at Reasons to focus on his own style and return to creating wines that are complex, yet balanced, and would serve to bring family and friends together.

We discovered and acquired this at the now closed Wine Discount Center where the staff loved this wine and give it 93 points. Wine Enthusiast ranked its 2008 as one of the top 100 wines of the vintage.

I first tried it back in 2013 and wrote "I don't feel it lives up to its billing or its expensive packaging of a oversize weighty bottle, however, it isn't priced like a premium Cabernet so it ends up being a decent value with reasonable QPR (quality price ratio)."

Consistent with my notes from another bottle back in 2013.

From the Horse Heaven Hills area of Washington's Columbia River Valley, the 2009 Reasons "The One" is medium bodied but a bit lean lacking polish and balance, but bursting with aromas of berry fruits upon opening, giving way to dark fruit flavors of black cherry, black plum, blackberry and cassis with hints of tobacco, leather and mushroom.

Posted by UnwindWine at 1:58 PM No comments: