Following the horizontal flight of 1997 Napa Cabernets at the gala New Year's Eve dinner, I pulled from the cellar this 1997 Napa Valley Cabernet Franc to taste with artisan cheeses and fresh fruit, and roast beef for a casual dinner. 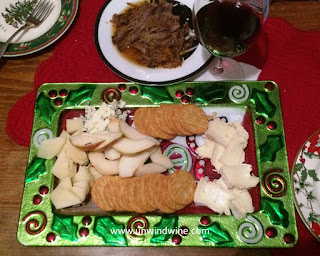 The other night we tasted four 1997 vintage Napa Valley Cabernet Sauvignons that were still remarkably vibrant and full of life. Tonight I pulled this '97 Cabernet Franc to continue the tasting comparison.

I remember taking a bottle of this label from this same case to a Holiday party when it was young and it was the absolute hit of the evening, showing extraordinary depth and breadth, beyond any of the other wines on offer that evening. We still have close to half of this case we obtained on release during that period.


The '97 Napa Cab Franc is showing its age and is clearly in the last chapter of its life, still showing fruit and a shadow of it true character, but it is time to drink up.

As written often in these pages, Del Dotto are one of our favorite producers whom we've featured several times at our wine producer dinners and have visited them at their various Napa Valley locations over the years.

Del Dotto events and winery visits have been the highlight of many of our Napa Experiences and should be on one's shortlist for a Napa Valley trip.

The Del Dotto Winery and Tasting Cave facility is on Highway 29 at Zinfandel Lane on the south end of St Helena on the edge of the Rutherford Appellation.

From 2009 to 2013 I published three tasting notes on this wine, one at 92 points, then two at 90 points. My previous tasting notes revealed this diminution of the fruit as this evolves in the last chapter of its tasting window.

"I acquired a case of this wine on release back in the late nineties but tonight's bottle had been purchased at auction. I mention this as the cork broke in half while opening, and then the wine had a slight discoloration and a slight barnyard funkiness upon opening. These may be indicators of less than appropriate or imperfect provenance, or signs of aging. I lasted tasted this from the cellar a year ago and prior to that it was almost three years to the day back in 2011. I'll pay special attention next time I open an original vintage bottle from my collection. That 2011 tasting note stated, "The Del Dotto Napa Valley Cabernet Franc 1997 was opaque garnet colored, medium bodied and opened with a earthy leather revealing its age, turning to black cherry, spice and a hint of tobacco (RM 90)." Perhaps tonight's experience was a continuation of that aging as this approaches the end of its (prime) drinking window. If that is the case then its time to drink up.

My tasting notes from a year ago though cites the same dark ruby color, medium to full body, but emphasizes the spicy black berry and black currant fruits are still vibrant in this sixteen year old, accented by tones of cedar and tobacco with hints of anise and leather on the smooth tannin finish. Same tasting profile other than the apparent effects of aging, or poor handling. In any event, tonight's diminution of fruit and slight funkiness rendered a reduced score of 86 points."

Posted by UnwindWine at 9:37 PM No comments: