With friend Mike in from NYC, we dined at Angelis Italian, our favorite local trattoria. I pulled from the cellar two Napa Valley Cabernets from Italian namesake producers - Del Dotto and Marco Di Giulio for the occasion.

Marco DiGiulio unique hand-crafted wines minimalist style wines were available under the winemakers' label and branding in limited quantities during the 2001 through 2004 vintages. They could be found in the boutique and specialist wineshops in Napa Valley or in the 'after market' via wine auctions. They were classic vineyard expressions of terrior, that unique expression of each vineyards distinctive character, produced in very small quantities of 200 to 300 cases. His approach to winemaking is fairly minimal, rather letting the vineyard and each vintage speak for itself. As he says, he wants to “taste” each vineyard.

Marco produced his wines at Bin to Bottle, a high quality custom crush facility for a number of small Napa Vintners in South Napa where he is a partner.

Winemaker Marco DiGiulio was born and raised in San Francisco soon after his parents parents emigrated from Tuscany. They become successful Bay Area restaurateurs and Marco grew up exposed to wonderful Italian meals and wine as part of everyday life growing up in the city's trendy North Beach.

Marco developed an in-depth knowledge of winemaking and viticulture through education and experience in the industry. He graduated with a degree in Fermentation Science from the University of California at Davis in 1985.

He spent two years at Buena Vista, then worked as cellar master at Pine Ridge Winery for more than four years before moving on to production manager for Atlas Peak Vineyards. He was appointed as winemaker for Pezzi King Vineyards in 1994. He became the winemaker at Pepi Winery in Oakville in '95. During this time he took charge of the Lokoya brand after the death of celebrated winemaker and mentor Greg Upton. At Lokoya, Marco earned his reputation for making world class Cabernet Sauvignon. Today Marco is no longer is entirely employed by one winery, rather he is a consulting winemaker for a number of high end boutique producers in the Napa area.

Marco also devotes attention to his personal projects: Vintage Wine Estates, Bin to Bottle, Lookout Ridge and Marco DiGiulio Wines where he strives to produce wines that reflect the rugged landscapes of the vineyard sources.


This Mt. Veeder Cabernet Sauvignon comes from the Progeny Vineyard owned by Betty O'Shaughnessy of the family with the winery bearing their name on Howell Mountain producing wines made primarily from vineyards on that site. The Mt. Veeder vineyard is laid out with steep terraced blocks that cling to a northeastern facing hillside at about 1,400 ft.

The 2001 vintage is considered one of the all time classics in the Napa Valley with a long mild summer, and ideal weather leading up to the harvest that produced wines with optimum intensity and character. 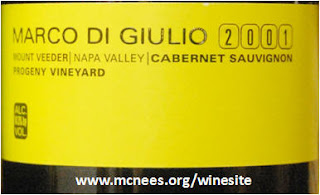 
Winemaker's Notes: "This wine is all about power.  From its inky deep purple color to its broad shouldered tannins, this is a big wine. On the nose, the first impression is one of blackberry and blueberry fruit with an underlying biscuity note from the oak.  Think berry cobbler in a glass.  On the palate, the wine is mouthfilling and explodes with fruit.  The tannins, while quite evident, are well tamed and there's enough fruit richness to balance them out.  The finish is long and complex, with more black fruit and spice. As for ultimate aging potential, with proper cellaring, I would guess 15 to 20 years wouldn't be too much of a stretch."

Posted by UnwindWine at 8:33 AM No comments: