We continued our exploration of Columbia Valley Bordeaux varietal wines, following our recent trip to Woodinville, Washington to taste Washington State wines in our Seattle Culinary and Washington Wine Tour. We drove by Matthews Cellars' tasting room and it was on my shorlist of spots to visit but it was especially crowded each time we passed. As with the other tastings from that trip, this reflects significant QPR - Quality Price Ratio, especially relative their French and Northern California counterparts.

For midweek grilled beefsteak dinner, I pulled from the cellar this almost twenty year old Columbia Valley Bordeaux Blend, the last remaining bottle of a lot I bought at auction, and the oldest  remaining bottle of similar labels from this era. Much of the fun or intrigue of wine collecting and tasting is comparing a label over time as it ages, and comparing it with its' peer group, bottle from the same appellation - Yakima Valley AVA - same terrior, soil type and climate, and from the same price range.

Often, typically tasting notes will be similar, subtle bottle variations aside, show gradual signs of aging, amplified as they reach their apex and go beyond their prime on the aging curve. Since I acquired this lot of bottles at auction, its impossible to determine the provenance of each of the bottles, where they were sourced and how they were stored over time. Hence it is not surprising to find subtle bottle variations. This lot was the case as three of the four bottles were consumed in the year they were acquired, each showing slightly differently.

This bottle was held another eight years and was consistent with the median of the other tasting experiences. 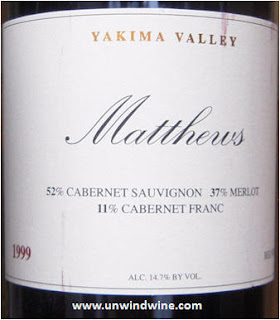 This was a blend of Bordeaux varietals, 52% Cabernet Sauvignon, 37% Merlot and 11% Cabernet Franc.


Our last tasting of this wine was back in December 2011 when I wrote; "Surprising over-achiever for our gala Christmas beef wellington dinner - this was more polished than earlier tastings, full bodied, complex, vibrant and expressive with layers of blackberry, black currants and cherry fruits, a layer of spice, black tea and cassis with hints of tar, leather and tobacco on the lingering moderate tannin finish."

Earlier that year in Sept 2011 I wrote: "I found the fruit to be moderate upon opening but brighter and more expressive the second day; complex and polished; blackberry, black currants and cherry fruits, and eucalyptus with a layer of spice, black tea and cassis with hints of tar, leather and tobacco on the lingering moderate tannin finish.'

And, earlier that year in Feb 2011 I wrote; "Dark inky color - medium - full bodied - firm black berry and black raspberry fruits are giving way to a tar, leather, cassis and hint of tobacco as this wine is passing its prime."

This week the wine was consistent with the latter two tasting notes, with slight diminution of the fruit and structure as the non-fruit tones of leather, tea and tobacco were starting to be more predominant over the bright black berry and black cherry fruits.