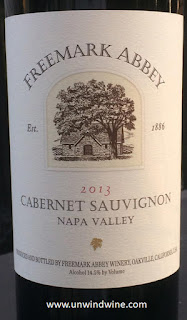 Freemark Abbey has been one of our favorite Napa Cabs for over three decades. Since the seventies, Freemark Abbey have consistently produced quality wines with a positive QPR (quality price ratio). Wine buddy Bill C and I used to regularly compare different labels and vintages of this producer in our tastings.

We've visited the winery numerous times and have purchased special bottles from their library for special occasion dinners. One memorable escapade was when we convinced Barry Dodd, Cellarmaster, to release two library selections, from 1974 and 1978, which we enjoyed that night at the CIA (Culinary Institute of America) to toast our wedding anniversary years.

So, when our local merchant Vin Chicago featured the current release Freemark Cabernet as their top wine for their regular Saturday tasting, I not only wanted to support such behavior, but I picked up several bottles as well to add to our vertical collection of this label.

When Bill and I became wine buddies back around the millenium, we quickly learned of our shared interest in and fondness for Freemark Abbey Cabernet. We would share and compare this Napa label as well as their single vineyard designated offerings from the Sycamore and Bosche vineyards - Bill having a vertical collection emphasizing Sycamore, and me holding Bosche. I still recall and have written about acquiring a case of the 1991 Bosche' after tasting it with Jeff Jaegar, one of the Freemark owners, at a Binny's tasting back at the time. We enjoyed this case over the next two decades having only recently recently consumed the last bottle, still drinking very nicely at 25 years of age.

Freemark Abbey gained notoriety at the famous Judgement of Paris Wine Tasting back in 1976. This was the legendary comparison wine tasting competition between top-ranked French vs. California labels - one for Chardonnays and another of red wines (Bordeaux wines from France and Cabernet Sauvignon wines from California). Of course, the wine world presumed this would be no contest stacking upstart California producers' labels against the classic historic French labels. Lo and behold, the shock and awe when not only did the Californians show respectably, but actually received the top ranking best in each category. Freemark Abbey was represented in both categories with it's 1969 Cabernet Sauvignon and 1972 Chardonnay.

The story is retold in the book Judgement of Paris, by George Taber, the only reporter in attendance to cover and record the event. It was also the basis of the wildly entertaining 2006 movie Bottle Shock. I highly recommend both for general audiences, and a must read/watch for wine geeks and oenophiles.


The 2013 is a Bordeaux style blend of 75% Cabernet Sauvignon, 11% Merlot and the rest Petit Verdot, Cabernet Franc and Malbec.


Its a testament to Ted Edwards and the team at Freemark Abbey, as well as the overall quality of the 2013 Napa Valley vintage, that they can produce over 24,000 cases of a 92+ Wine Advocate rated wine. And, kudo's too for keeping the price point reasonable to provide a high QPR (quality price ratio).

This was dark opaque purple in color, full bodied, with complex, concentrated, rich but nicely integrated blackberry and blackcurrant fruit accented by a layer of mocha chocolate with tones of allspice and tobacco leaf with firm but approachable tannins on the big finish. This is drinkable now but will last a couple decades or more of cellaring. It has a bit of an edge that will likely smooth and become more polished with a few more years of aging.

I picked up this wine to enjoy now and also to hold as part of our horizontal collection of 2013 wines to commemorate the birth year of two of our grand-kids, Richie and Marleigh.