Found this in the cooler to go with pepper steak and salad that L prepared for dinner before she ran out for the evening. Besides our subterranean cellar we also have a cooler adjacent to the kitchen for every day or ready to drink wines. It mostly contains white wines but I checked it tonight and pulled out this bottle, so placed for consumption at some point. What a nice surprise! This certainly exceeded expectations.

This is from Nine North Wine Company, another négociant wine supplier that offers a portfolio of small production wines from Napa Valley and other California North Coast appellations. Like most négociants, they strive for high QPR wines - high quality and value relative to price, sourced from small production producers, or others seeking to liquidate (no pun intended) excess inventory or production.

Founded in 2001 by Jim Regusci and James Harder, Nine North Wine Company established a reputation for producing appellation-specific wines that provided good value for the price; their objective to leverage their network of grower producer contacts into a portfolio of négociant wines.

In December of 2012 Nine North Wine Company Nine North was taken over by Chris Nickolopoulos and Elija Pfister who had also established a reputation for producing a portfolio of appellation-specific wines' négociant wines.

Chris Nickolopoulos grew up in the midwest in a restaurant family where he was immersed in the food business. In 1990, Chris moved into a noisy little apartment next to the Addison “el” tracks in Chicago’s Wrigleyville.  He immersed himself in Chicago’s culinary scene tending bar at the swanky Spiaggia, and moved on to various roles in the wine trade. After 10 years, he moved to San Francisco to lead a respected fine wine sales organization where he spent the next seven years traveling the world tasting great wines and helping build some respected wine brands in the country.

Elijah Pfister grew up on a family farm in Northern California. When his family urbanized and moved to the Bay Area, he looked to neighboring Sonoma and Napa to pursue his appreciation of rural life and farming in viticulture and winemaking. Elijah’s uncle owned a large wine and liquor retailer and Elijah followed in his footsteps in the wine trade when after obtaining his MBA from Stanford, he pursued his love for wine in the business.

Teaming up with Chris’s connections, they assembled a portfolio of imports and launched Maritime Wine Trading Collective in January of 2009. They progressed their business parlaying contacts in the Northern California wine industry into a portfolio of négociant wines.

Twenty Bench Cabernet Sauvignon from Napa Valley was one of the first wines released by Nine North Wine Company twelve years ago. They like to emphasize many other not-so famous-parcels of land throughout Northern California that yield terrific fruit from sites with land values not as astronomical as Napa, thereby producing fruit at substantially lower cost per ton resulting in excellent wines that are a good value for the variety. 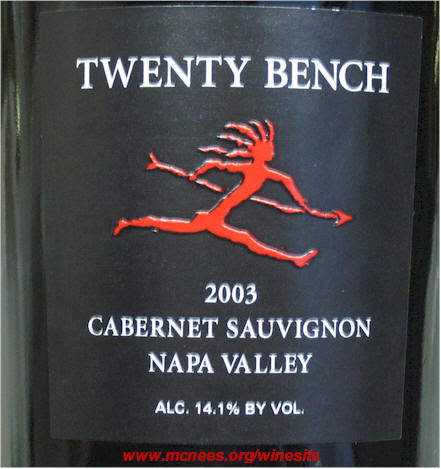 In the fall of 2000, Nine North purchased 20 tons of Cabernet Sauvignon grapes from a friend's Napa Valley vineyard. Their winemaker, Charles Hendricks, crafted this wine from what the cellar hands called 'Twenty Bench, 'signifying the 20 tons of fruit from the gentle rising bench land vineyard from which they were picked.

When Charles presented barrel samples to the principles, they noticed the name 'Twenty Bench' written in chalk on the side of the barrels. The result was a high QPR wine with the perfect name.

At a dozen years of age, I didn't know what to expect, but was pleasantly surprised by a moderately complex, nicely balanced, moderately polished wine with dark garnet color and medium body. An expressive nose with flavors of kirsch, floral, with brambly black raspberry fruits, tones of cola and a hint of mocha taken over in the mid palate turning to predominant spicy tangy acidity with smokey red fruit and candied cherry on the firm tannin laced lingering finish.

Posted by UnwindWine at 7:00 PM No comments: