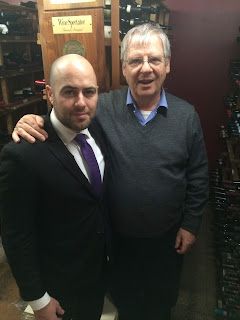 For the second Thursday night in a row I hosted a business dinner at Italian Village Chicago and wine director Jared Gelband (right) served up a duo of Italian varietal wines to showcase our dinner selections, a Amarone della Valpolicella followed by a Brunello di Montalcino Sangiovese.

Tonight, we dined in one of the private tables/rooms in the Village, one of the three restaurants on the premises, a perfect setting for an intimate or business dinner.

In my blogpost about our wine and dinners last week, I wrote about Italian Village, Chicago's oldest, longest running continously family operated Italian restaurant in Chicago. 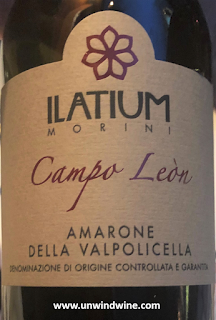 In 1992, the Morini family bought bought a historic farm house from the early 1900's, surrounded by vineyards in the heart of Val di Mezzane.

For over forty years, ILatium Morini have been growing grapes  which they initially delivered to the local Cantina Sociale (cooperative wine cellar), but, eventually for production of own label wines. Seven brothers and cousins inherited the business that they continue to run to this day.

The origins or our village name Ilatium is from the word Latii, "those from Lazio", referring back to the ancient Romans who came in searching for remote lands to conquer. They settled in the area where they found an ideal environment for the cultivation of grapes, olives and fruit trees. The locals called them the Latii, "those from Lazio" who at the time were considered "strangers" or foreigners. 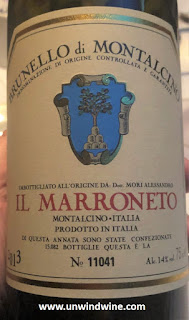 For our entree course we ordered Sangiovese and Jared served up this Brunello.

Il Marroneto was purchased in 1974 by Giuseppe Mori, father of  current owner and winemaker Alessandro Mori. The Mori family thus began to make wine in the first two small rooms of Il Marroneto  in a historical building that dates back to 1246.

The first three thousand meters of Sangiovese vineyards of Il Marroneto  were planted in 1975, then, as many again in 1979, and another 9000 in 1984. They are sited on the north slope of the hills about 350m elevation in the vicinity of the walls of Montalcino in Siena.

The vines of Il Marroneto are arranged so that each plant has 3.6 square meters, allowing the Sangiovese vines, which feed on the surface, to have optimal spacing for a good rooting.