We don't have a large collection of Italian wines in our cellar but when daughter Erin announced she was bringing lasagna over for a family dinner I pulled this Toscana Sangiovese blend for the occasion.

This is a blend of 2/3 Sangiovese and 1/3 Cabernet Sauvignon - the popular favored notable blend of new age Italian wines from Tuscany known as IGT designated wines (Indicazione Geografica Tipica). This designation was introduced in 1992 to allow use of Bordeaux varietal grapes in the blend which were previously not allowed under the Italian DOC or DOCG appellation rules. Shortly thereafter, in 1994, Bolgheri DOC was established as an official DOC classification for Cabernet – Sangiovese blend wines. IGT designated wines are classified based on their region of origin, rather than their grape varieties or wine styles. 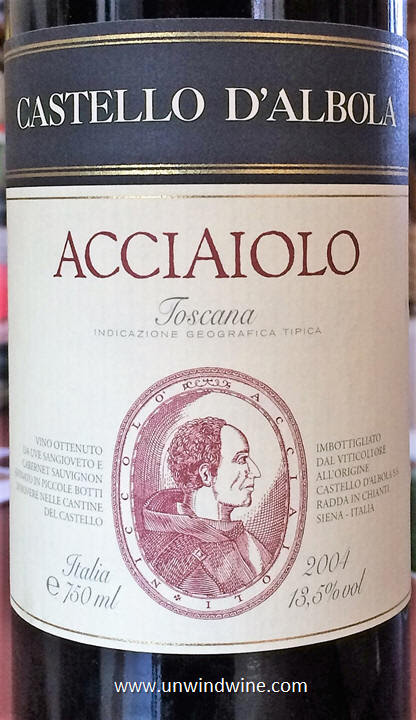 Toscana IGT is the most famous and most popular IGT designation for wines produced in Tuscany where there are actually 10 different provinces where the wine could be produced - Arezzo, Firenze, Grosseto, Livorno, Lucca, Massa Carrara, Pisa, Pistoia, Prato and Siena. These names are often associated with the producer in labeling the wine indicating its geographic origin within the region of Tuscany.

The blend balances the distinctive black-cherry and wild-berry flavors of Sangiovese with the structure and power of Cabernet Sauvignon.   Cabernet – Sangiovese wines are produced extensively as IGTs in Tuscany, and are known under the famous (if unofficial) title of Super Tuscans. These wines combines two of the most popular wines styles of Northern Italy and Bordeaux varietal based wines from that popular French region as well as California, and increasingly from Washington State and even Australia.

Tuscan IGTs are the basis of what have become highly popular and iconic Super Tuscan labels such as Marchesi Antinori Tignanello, Solaia, Sassicaia, Querciabell, and Castello dei Rampolla Sammarco to name a few.

This was dark blackish garnet colored, full bodied with firm structure and complex concentrated blackberry and tangy black cherry fruits accented by black tea, tobacco, and hints of smoke with mouth puckering firm tannins and tangy acidity on a lingering finish. This begs for the spicy meat and tomato sauce and cheeses of the lasagna and garlic bread - a perfect accompaniment.