Wine and cheese in front of the fireplace and a PPV movie - date night Saturday night. Linda prepared butter toasted almonds, blue cheese, pear slices and honey drizzle, an ideal complement to a hearty robust Syrah (aka Shiraz). We opened a Rosemount Balmoral Syrah from McLaren Vale. We hold about a decade of this label going back to the early nineties. 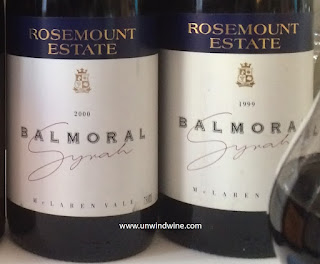 This vineyard is one of the few in Australia with vines dating back a hundred years. The concentrated fruit is akin to the Chateau Tanunda with its legendary 100 year old vines. The story of us Pour Boys discovering and then capturing the US allocation of this wine has been written often in these pages.

Consistent with previously reported tasting notes from 2010 and 2012, this 2000 was dark inky purple/garnet colored, medium-full bodied. Aromatic, leather, slightly earthy aroma that gives way to complex flavorful blue fruit and ripe black raspberry fruits that turn to raisin, tangy black cherry, cassis, tar, and tobacco turning to an aftertaste of smoke, currant and a hint of plum. Over the course of the evening, the wine seemed to age as the berry fruits gave way to the more fig raisin aged feel while the deep aromatics lingered.

Posted by UnwindWine at 4:30 PM No comments:

During our NYC getaway weekend, before dinner, we stopped in the Michelin star Il Fiore restaurant bar in the tony Langham Hotel in NYC.

We were seeking small plates and some wine from their extraordinary selection for a casual setting. Not often does one have the choice of Phelps Insignia, Tignanello, Sea Smoke, Quilceda Creek, Cos d' Estournal and Vieux Telegraph BTG (By-The-Glass)!

I selected the Torchon Foie Gras with tart cherries and winter squash (shown below) which was perfect for the occasion and was spectacular with Domaine du Vieux Télégraphe Châteauneuf-du-Pape Piedlong. 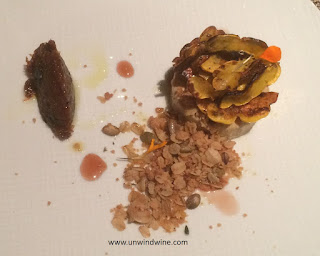 Linda had the crispy grilled artichokes with parmesan and lemon aoli, with a Benjamin Leroux Auxey-Duresses Burgundy Pinot Noir which was not on the winelist and was substituted for our initial selection.

Il Fiore offers a elegant but casual comfortable setting for a delightful food and wine experience, albeit rather expensive, but in-line with New York prices and such quality premium offerings. We look forward to returning for dinner there during a future trip. 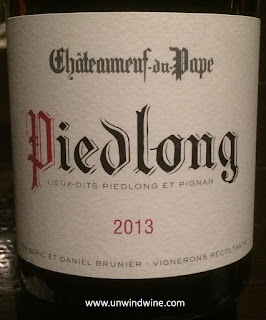 The BTG winelist (shown below) specifically said 'La Crau', which refers to the flagship CDP offering from this Domaine, but this label was served instead.

Domaine du Vieux Télégraphe has been run by the Brunier family for six generations, since 1891. The estate’s vineyards sit on the Plateau of La Crau, the highest point, in the appellation of Châteauneuf-du-Pape.

Back in the 1800's , Claude Chappe, inventor of the optical telegraph, built a signal tower on the property due to its high elevation in the region, hence the property was given the name “Vieux Télégraphe”.

This Piedlong label was first released in 2011. It comes from a 29 acre vineyard site from the stony soils on the Piedlong plateau in the heart of the appellation, north of the village, the highest point in the region. The Mourvèdre, comes from the Pignan lieu-dit, just to the east of Piedlong. We visited the Vieux Télégraphe estate during our CDP appellation tour back in 1998 and then again this year during our 2019 visit with owner/producer Alain Brunier at the Estate. 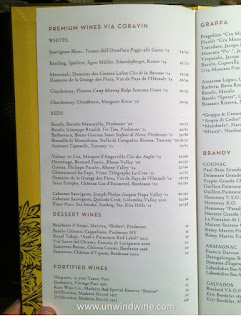 This label is a blend of 90% Genache Noir and 10% Mourvèdre. Comprised of but two varietals, its a simpler less complex wine than the flagship label which under appellation rules can contain up to thirteen different varietals.

Another substitution on the winelist, this label has a rouge and a blanc variant. We were looking for the blanc Chardonnay, but they served the rouge Pinot Noir instead.

Auxey-Duresses (pronounced “Oh-see”) is an appellation is in the famous Côte de Beaune area in the region of Burgundy, surrounded by two famous neighbors, Volnay and Meursault.

Readers of these pages know we don't do many Burgundies, mostly because we favor the Bordeaux varietals (Cabernet Sauvignon, Merlot) over the Burgundy Pinot Noir.

Also, I'm not knowledgeable in all the myriad of appellations and producers from the region and find it a bit confusing and mystifying. This is much the case for many folks, for many regions, but its especially challenging for Burgundy with all the mini and micro producers and labels that typifies what this regions is known for.

My advice to folks is to focus on one region, gather knowledge and experiences as a baseline and for comparisons, especially if one is going to start collecting wines.

We selected this Benjamin Leroux Pinot Noir from the Auxey-Duresses appellation, an area noted for high QPR and excellent value. 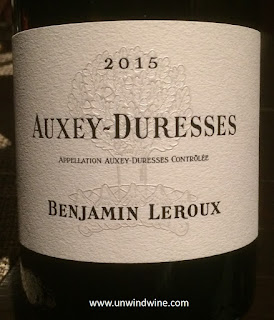 This is the label of Benjamin Leroux, manager/winemaker of Domaine Comte Armand who launched this label with the 2007 vintage. Leroux's Auxey-Duresses are from fruit sourced from vineyards that he manages, vineyards he owns, and he also buys fruit (never juice or wine) from growers with whom he works closely so to meet his standards.

The vineyards lie below the village of Beaune, adjacent to the Meursault Villages Les Vireuils Dessus and Les Meix Chavaux. The land is north-facing so it is affected by the cold air rolling down from the Hautes-Côtes.

The wines here come from three terroirs in this cool, mineral (rocky) place - Les Hautés, La Macabrée and Les Boutonniers. The oldest vines date back to 1946, planted just after the war. The vineyards span 2 hectares, large for this area where many of the properties are tiny in comparison. Hence Auxey-Duresses is a primary wine for Leroux.

Leroux's Auxey-Duresses is produced in a new winery in the center of the village of Beaune (just off the Boulevard) that is also used by Dominique Lafon and two other wine growers. The operation is very small and specializes in Puligny and Volnay, but there are over twenty different labels produced, in this ‘micro negociant’ operation.

Like so many Burgundy operations that are small, even tiny, only two to five barrels are produced from many of the offerings, resulting in extraordinary fragmentation and granularity in the plethora of small production labels.

This Pinot Noir was somewhat opaque, light in color and body, with blackberry and black cherry fruits accented by tones of leather, dusty rose and spice with smooth soft tannins on the finish.

Posted by UnwindWine at 8:45 AM No comments: