For our annual bootcamp and academy, to be followed by our international conference hosting over 20000 guests in Las Vegas, we held a gala reception at the Skyline Lounge and Rivea Restaurant atop the Delano Hotel / Mandalay Bay.

I took the opportunity to tour the magnificent Rivea wine cellar. There are so many extraordinary highly rated wine cellars in Las Vegas that each is overshadowed by the next. No less than 77 Wine Spectator Award of Excellence awarded winelist restaurants are in metro Las Vegas with 46 holding the prestigious Best of Award of Excellence. This ranks with the 78 in Los Angeles, 79 in San Francisco and 83 in Chicago.

An Award winning designation is a mark of distinction and such a wine cellar is one of the crown jewels of awarded restaurants. Of course, I'm a wine geek oenophile and I start with the wine list awards as a requisite criteria when I'm searching for a restaurant for a fine dining outing.

Rivea and the Skyline lounge sport direct express access via private elevator, a vibrant elegant, chic but laid back atmosphere, and arguably the best views of the Las Vegas skyline from high atop the Delano Hotel, hence the namesake Skyline Lounge.

The high end prestigious labels is predominant with the best First Growth Bordeaux, Burgundy and premium and super premium California wines, as well as mid-tier labels and a selection of carefully chosen more modest entree level labels for those not wanting to part with a car or house payment for a bottle of wine.

The high end First Growth Bordeaux selections included the most expensive bottle on the list I found, Chateau Lafite Rothschild for $17000, several Chateau Mouton Rothschilds dating back to 1982, and an extensive selection of Chateau d'YQuem vintages (shown left).

Some of the other highlights include some of my favorite super second Bordeaux including a double magnum of Chateau Leoville Las Cases 1989 and several vintages of numerous other Bordeaux such as Pichon Longueville Comtesse de Lalande. 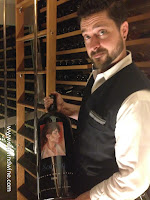 From California, they hold several of my favorite wines which I hold in my cellar including Clark Claudon and Dunn Vineyards from Howell Mountain and Napa Valley.

I was graciously hosted by Sommelier Matthew George, pictured, who works under the leadership of Wine Director Harley Carbery, who is also assisted by Sommeliers Coltin Short and Norman Acosta.

George, a Las Vegas native, has been working on his wine tradecraft for close to a dozen years. He's in pursuit of his Advanced Sommelier certification having passed parts of the certification exams in each of the last two years.

Watch for our wine dinner reviews of Rivea and plan an evening there for a notable wine dining experience. Tell them you read about them here!


Posted by UnwindWine at 7:37 PM No comments: Links to this post