Continuing our Coronavirus shut-in, we ordered 'curbside carry-out' from our neighborhood trattoria, Angelis Italian. We're endeavoring to support our local restaurants during this crisis albeit remotely since the bar and dining rooms remain closed . 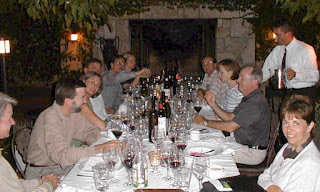 I pulled from the cellar a boutique Napa Valley producer Clark-Claudon Cabernet Sauvignon.

We hold close to two decades of vintages of this label going back to their inaugural release in 1994.

Clark-Claudon are estate bottled Cabernets, sourced from their 18 acres of vineyards on the northeast side of Howell Mountain. The total estate covers 115 acres, sited between 800 and 1200 feet elevation, between Ink Grade & Howell Mountain roads.

We met Tom Clark and Laurie Claudon-Clark (middle couple on left) when we hosted them for a wine producer dinner at then trendy Pinot Blanc in St Helena during our Napa Valley Wine Experience back in 1999.

I recall friend and wine-buddy Paul McDonald (left) from LA had some association with the restaurant ownership back in the day.

I selected a 1997 vintage release which is one of the few bottles remaining from a case we acquired back during that trip. The much heralded '97 Napa Cabernets were highly rated and projected to be long lived.

As I wrote in a previous tasting of the release back in 2014, "In earlier tastings of this vintage of Clark Claudon, I wondered if it was like Dominus (86) and some Bordeaux (89-90 Pichon Lalande) that I later learned I drank too early when they finally 'awoke' to reveal their true character and fruits years later?'

Back in 2014, "Unlike previous tastings when the Clark Claudon was somewhat closed and a bit flabby with muted fruit upon opening, tonight it seemed to be showing its age, opening to ripe raisiny black cherry and black berry fruit, with subtle tone of cigar box and leather with nicely integrated and balanced silky smooth tannins. After an hour or so the fruit closed down and it became subdued leaving a slight astringency and tones of tobacco and leather.'

Tonight, this was settled and open and while not showing diminution from age, will certainly not improve further, but there should be no hurry to consume the remaining bottles for another year or more.

Due to the wax seal on the top of the bottle, I couldn't easily use my ahso two pronged cork puller, which I would normally use for an aged bottle. Despite using the 'rabbit ear' cork screw with the extra long screw, the cork pretty much disintegrated in a crumble and had to be dug out in crumbly pieces from the bottle, which was then strained and decanted.