I first tasted this vintage of this wine in a cellar tasting at the Chateau (shown left) during my visit to Châteauneuf-du-Pape in 1998. The picturesque Domains Perrin Beaucastel estate and vineyards was one of the highlights of that trip. There is more on Beaucastel and that visit on an earlier blogpost.

I still hold a half case of this wine and it appears to be time to drink up as it seems to be at the apex of its tasting/aging curve. It will be interesting to do a horizontal tasting of the other wines that I still hold that were featured and collected from that trip, notably, Chateau La Nerthe and Vieux Telegraph.

My tasting notes and score are consistent with earlier tasting which was posted in 2010. The color is opaque dark ruby, the nose is subdued, this is medium bodied and shows layers of rather austere black berry and black cherry fruits accented by subtle black pepper giving way to slightly earthy leathery red fruit on a meaty acidic tannin finish.

This is another big Napa Zinfandel from Robert Biale vineyards that was featured in a recent earlier blogpost highlighting a rib dinner at Bill and Beth's at the beginning of the summer.

Not quite as big or polished as the 2011 Party Line Zinfandel we had a few weeks ago, this was still a big, forward black fruit filled Zinfandel with brambly, zesty black pepper tones and a spicy leathery finish.

This is the flagship wine of David Arthur, named for the elevation of the vineyards up on the eastern slope overlooking the Napa Valley floor (shown left) from up on Pritchard Hill.

Our visit to the David Arthur winery was a highlight of our Napa Wine Experience 2013 featured in an earlier blogpost in April of this year. 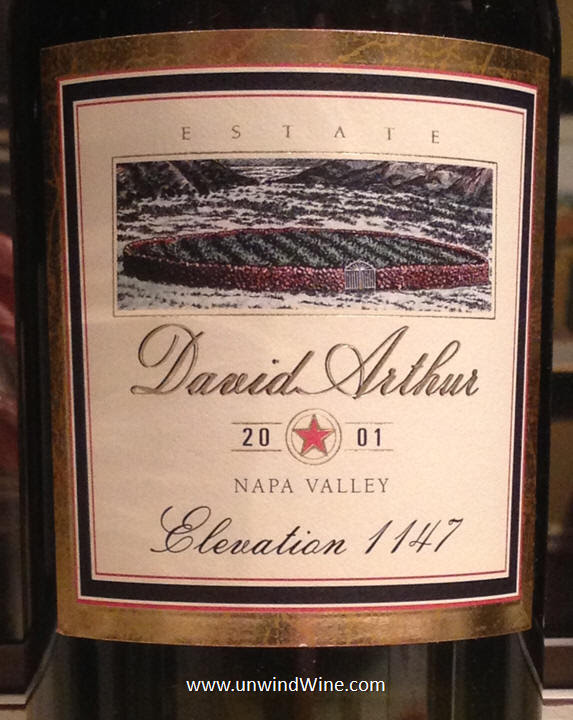 With dark inky purple color and full body, this opened with big, concentrated, complex, rich, chewy, tongue coating forward ripe black berry and black raspberry fruits. Then something happened and it shut down and closed up somewhat about an hour and some after opening and decanting. It still had a layer of sugary sweetness with tones of mocha and black licorice and a whisper of black pepper on a silky smooth tannin finish.

I'd like to see how this reveals itself a day later but we finished  it last night! While this should be considered a perfect complement to a hearty grilled steak - it stood up and was well suited to the barbecue ribs.

This started out as a blockbuster 95 pointer before it retreated as noted above, yet still warrants a most respectable 94 points.


Posted by UnwindWine at 9:40 AM No comments: