For a global team meeting of one the portfolio product teams, we dined at Porter Kitchen & Deck on the Riverside Plaza just up-river (Chicago) from our offices.


Porter Kitchen & Deck advertises that they feature American cuisine and classic cocktails in an elegant and relaxed setting.

Like our offices, Porter is located along the edge of the Chicago River, and from tableside and its Riverside patio, it offers spectacular views of the north loop and River North cityscapes from its setting opposite Wolf Point at the junction of the three branches of the Chicago River.

The location of Porter Kitchen and deck offers views of some of the most interesting and exciting architecture in the city including the award winning and highly acclaimed 150 North Riverside Plaza building in which it is situated. The building dramatically cantilevers from a center base to extend out over the front and riverfront appearing as if it might tip over. The site on the riverfront offers not only great scenery but also a front row seat of the bustling riverfront and boat traffic which on this summer evening was a non-stop parade of tour boats, water taxis, luxury and sporting pleasure boats and industrial barges as well as kayaks and small boats darting around the traffic like water bugs on the surface.

“The municipal device, for use by the varied unofficial interests of the city and its people, shall show a Y-shaped figure in a circle, colored and designed to suit individual tastes and needs.”

The "Y" symbolizes the Chicago River’s three branches, created in 1892 for a Chicago Tribune contest. In 1917 the City Council made the flag, seal and municipal device official city symbol. It can be seen in municipal and commercial buildings around the city. Certain City agencies have it as part of their logo or inscription.

Perhaps the most famous or best known use of the "Y" is embedded in the sign of the famous Chicago Theatre (shown above).

We have views of the Wolf Point site from our 28th floor offices, lobby, board room and conference rooms looking up the river (shown left).

Located in the new 54-story skyscraper on the edge of the Chicago River, Porter Kitchen & Deck features classic American cuisine in a trendy, elegant and relaxed setting in a prime location.

They offer somewhat limited lunch, dinner and bar selections include entrées, fresh seafood, salads and sandwiches. The Porter bar serves craft beers and classic cocktails along with a limited selection of WBTG (wines by the glass) and a narrow, limited, sharply focused wine list.

The restaurant, while located in a central convenient location, is awkward and a bit confusing in its access. While it is visible at river level when crossing the Randolph Street bridge, you can't access the restaurant directly from the street-level sidewalk. Nor can you descend the outdoor staircase where the restaurant's logo appears on a signage for the building and other primary tenants, because the door at the bottom is locked. To access the restaurant, one walks inside the office building, and if you're paying attention so as not to overlook it, turn immediately right to a poorly marked elevator bank, where you descend down to the riverside level and restaurant.

Porter describes its food as "American," an accurate characterization, but the selection is rather limited and unimaginative. So too is the winelist. Fittingly, their description of themselves is accurate and sums it up, "New American cooking, martinis and craft cocktails."

Porter describes its food as "American," an accurate characterization, but the selection is rather limited and unimaginative. So too is the winelist. Fittingly, their description of themselves is accurate and sums it up, "New American cooking, martinis and craft cocktails."

Naturally, being a wine guy who generally selects a restaurant based on its wine list, or BYOB policy, this would not be my choice or on my select list except for a business focused lunch or dinner. In those circumstances, I would likely rule it out as it borders on the side of being noisy, even boisterous, offering little chance for a serious business discussion over the cacophony.

Never-the-less, our food and accompanying wine selections were adequate and suitable for the occasion starting with a Oregon Chardonnay for an opener. 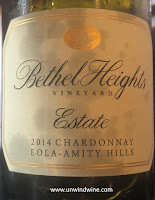 https://www.cellartracker.com/wine.asp?iWine=2328071
Pale gold color medium bodied, pleasant easy drinking, crisp, nice purity, notes of white peach, melon, lemon and hints of lychee and mineral, with a clean and refreshing finish.
90 pts.
This was pleasant and refreshing with our starters and salad course.


We then moved on to a full red with or entree courses.

Strangely, the winelist was narrow with a few limited selections of Pinot Noirs and a couple of selections of Cabernet and Merlot. Then, there was this Italian Nebbiolo which offered an interesting 'best buy', decent QPR (quality price ratio) based on the slim offerings. 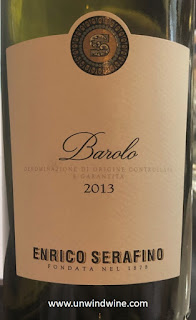 Wine Spectator gave this wine 92 points and wrote: "A polished red, displaying tobacco, eucalyptus and muted cherry flavors, backed by a dense matrix of tannins. All the components are here, but this needs a few years to integrate and mellow. Best from 2021 through 2033. (BS)"


The Serafino 2013 Barolo seems hidden within our Italian section yet is one of the better Barolo values going. It is both wonderful to open now or to place in the cellar a few more years. It's sure to please those looking for a very well-priced Barolo as well as anyone wanting to try Barolo for the first time.

I liked it and found it pleasant and suitable drinking for my burger entree selection.

I'll defer to fellow Cellartrackers who offered these perspectives on this label:

Bright, light cherry colour, great nose from long distance on pour - violets, white pepper, liquorice and fresh tar, complex and volatile (in a good way), slightly underripe but refreshing cherries on palate, great balance with subtle grip, complexity carries through finish of red fruits into tobacco and black pepper.
Excellent wine with notes of red and dark fruit with tobacco. Flavor changes dramatically with oxygen. Will be excellent in a few years time.
Nose of dried cherries, flint, touch of garrigue. Mouth feel is dry with astrigent tannins. Some red fruit but overpowered at this point by large amount of barrique. Will be more balanced and amazing in 4-5 years.
https://www.cellartracker.com/wine.asp?iWine=2648475

Posted by UnwindWine at 3:22 PM No comments: