We just received our Vault Key Club release allocation shipment of Long Shadows Vintners Series which included this Sequel Syrah 2017. We discovered and signed up for this during our Washington Wine Experience when we visited the winery tasting room in Woodinville last fall.
We discovered and acquired this wine during our Woodinville, WA wine experience last fall. This is a selection of the Long Shadows Vintners Collection, a portfolio of seven ultra-premium wines showcasing the viticulture of the Washington State Columbia Valley growing region and the artwork and expertise of internationally acclaimed winemakers who crafted them.

Long Shadows was founded in 2003 by Washington State wine legend Allen Shoup, former Chairman and CEO of Chateau St Michelle, one of the premiere wine producers in the State. There he evangelized Washington Wines and championed collaboration with notable winemakers from around the world. Upon retiring, he started Long Shadows with a vision to produce the best, art of the possible wines showcasing/featuring the region's grapes, each produced by a world renowned winemaker reputed for producing grapes of that varietal.  Each vintner had access to Washington State's best grapes and a winery to outfitted to accommodate a their exacting cellar specifications. The idea was a resounding success as the wines have received critical acclaim that grown with each vintage. The Long Shadow collection went on to win numerous awards, including recognition as Food & Wine magazine's "Winery of the Year."

The winemaker for Sequal Syrah is notable legendary Shiraz/Syrah winemaker John Duval, best known for his work with Penfolds’ Grange, the gold standard for Australian Shiraz. Few winemakers are as synonymous with the iconic wines of a country as John Duval and this label, arguably the most famous and well known label from Australia.

John joined Penfolds winery in 1974 after completing his studies in agriculture and winemaking. In 1986 John was appointed Chief Winemaker, following the winemaking greats Max Schubert and Don Ditter. During his time as Chief Winemaker, John helped establish Penfolds as one of the world’s great wine brands.

While his honors and awards are too numerous to list, some of the highlights include the Robert Mondavi Trophy for Winemaker of the Year in 1989 at the International Wine & Spirits Competition in London; two-time recipient of the Red Winemaker of the Year award at the International Wine Challenge in London, first in 1991 and then again in 2000; and Wine Spectator’s “Wine of the Year” award in 1995 for the 1990 vintage of Penfolds Grange.

After 28 years, John stepped down from the company in 2002 to establish John Duval Wines, debuting with the 2003 vintage and producer today of four wines under his John Duval Wines label, all Rhone varietals, a white from Marsanne, Roussanne, Viognier, and three reds; one a "GSM" (Shiraz, Grenache, and Mourvedre), and two Shiraz'.

In addition to making his own wine, John also has a joint venture project with Ventisquero in the Apalta Valley, Chile.

In 2003, John traveled to the Washington State Columbia Valley at the invitation of Long Shadows Vintners’ founder Allen Shoup to make his first U.S. wine, Sequel, a name chosen in recognition of his life’s work with Syrah.

Never one to be far from great Shiraz, he currently resides in the Barossa Valley, home to some of Australia’s oldest vines.

Long Shadow's Vintners Series Sequal 2017 Shiraz is sourced from Yakima Valley's Boushey Vineyard for 1/3 of the fruit, to which the winemaker attributes 'bright and elgant character', one third is from Bacchus Vineyard Syrah, grown on a south-facing block planted in 1993, adds black fruit character and richness, and Red Mountain Syrah adds to the wine's dark, brooding character and backbone. Two thousand eighty five cases were produced.

According to the producer's, the 2017 vintage was a 'classic' much like the 2012 and 2013, with moderate temperatures and extended hang times which enabled the grapes to achieve full maturity and color. This laid the foundation for vibrant dark fruit characteristics lifted by bright and well balanced acidity. 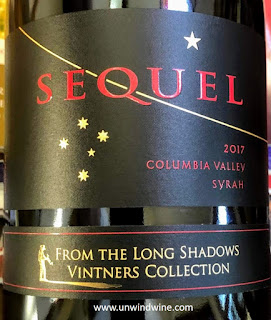 Winemaker's notes: "Deep and inky color ... aromas and flavors of fresh blueberry, vilet and a hint of cassis. Black olive tapenade and savory spice persist across the mid-palate. Multi-layered an well structured, the wine's refined texture and enticing viscosity lead to a long impressive finish.

We opened this to try it upon receipt. It was dark inky purple colored, full bodied, bold and concentrated flavors of black raspberry and blue fruits, notes of cassis, spice and what the winemaker called black olive tapenade are apparent, turning to a long flavorful finish. Give it some time to settle and integrate the fruits for more polish and balance.

As of this writing, the 2017 release of Sequel is not yet announced or released to the public on their website.

Posted by UnwindWine at 4:29 PM No comments: