Entering week four of the Coronavirus shut-in, we order from Angelis Italian, our local neighborhood trattoria. I pulled from the cellar this vintage aged Marco DiGiulio single vineyard designated Cabernet Sauvignon for the wine pairing. I have blogged about the background and history of Marco in these pages.

Marco DiGiulio gained a reputation producing premium wines as consulting winemaker for a number of high end boutique producers in the Napa area. He worked at well known wineries including Buena Vista, Pine Ridge, Atlas Peak and Pepi Winery. While at Pepi he was put in charge of the esteemed Lokoya brand focusing on high end Cabernet Sauvignon.

He came on the scene with his own label in 2001 through 2005 and then seemed to fall off the grid in terms of his own label. We saw his label in the Napa Valley wineshops that featured hip limited release boutique producers such as Bounter Hunter wines in downtown Napa. He also had some select distribution in New York, Florida and a few other states. We found and acquired his wines on Winebid.com. It was also available on his website at www.marcowine.com, but it has become increasingly scare with the passing of time.

We still hold each of his vintage releases, '01 through '05, from both his vineyards, Mt Veeder and Diamond  Mtn. As a borderline obsessive wine geek, we researched his vineyard sources and his subsequent works to track terroir and legacy and succession in artwork. We have written about his work as we have in the cases of the Long Shadows and their Vintners' Collection which features the works of Philipe Melka and Randy Dunn, two legendary Napa producers, or Nils and Kirk Venge, who touched so many labels across the valley over time.

Much of the fun of collecting and studying fine wine is to follow the careers of notable winemakers from label to label, from vintage to vintage. Much of my journaling in these pages is following winemakers through such studies. Such a pursuit and study has been more difficult with the more stealthy, less public Marco DiGiulio.

Marco DiGiulio Wines featured single vineyard designated selections with premium fruit sourced from prime vineyards on Mt Veeder and this Mark K Vineyard from Diamond Mountain.  I wrote about his Mt Veeder label sourced from the legendary Pym Rae vineyard in this blogpost.

Marco branded release bottlings are packaged in large extra heavy gauge glass bottles with an extra deep bung, that 'bump' in the bottom of the bottle to separate sentiment. Each of his two wine labels were produced in small quantities of only 200 to 300 cases. Marco’s wines were aged in 100% New French Oak barrels. 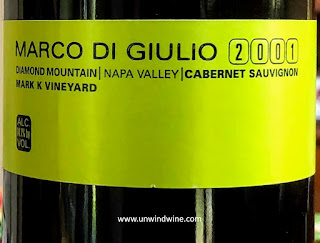 This Diamond Mountain Cabernet Sauvignon is sourced from a vineyard owned and managed by Norm Kiken, the owner of Reverie Winery. The vineyard grows on volcanic soils with a southern exposure and always ripens well.

Posted by UnwindWine at 6:12 PM No comments: