Traveling to our state capital on business, I stopped in the recently opened local Binny's store to select some wine for carry out dinner back at the hotel. I opted for this Napa Cabernet that at under $20 sale price promised high QPR (quality price ratio). 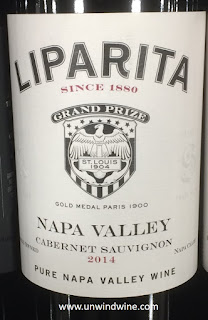 I've written earlier in these pages about the 'old' Liparita brand from the nineties. The actual original brand dates back to the historic beginnings of wine in America back in the 1880's when William Keyes, a geologist, settled in Napa Valley and discovered the Howell Mountain terroir with its volcanic soils which he felt would be ideal for wine. The soils reminded him of those on Lipari Island, a volcanic archipelago off the coast of Sicily, which became the inspiration for the name “Liparita.”

Like many other early wineries, Liparita succumbed to the restraints of Prohibition and the attacks of phylloxera on the early vine plantings. The Liparita brand resurfaced briefly during the nineties and then after waning was purchased was relaunched by Spencer Hoopes who purchased it in 2006.  Hoopes focuses on producing and remarketing Napa Valley appellation specific wines.

This revitalized Liparita label replicates the original early 1880's design, and that original intent to produce great cabernets from the various notable vineyard regions from across Napa Valley. “We are reawakening William Keyes’ dream for Liparita.” says Hoopes.

This was dark blackish garnet colored, medium-full bodied, firm, tightly wound black berry fruits with notes of smoke, hints of black cherry, dark mocha, black pepper and black olive on a tangy finish. It was an ideal complement to my carry out New York strip steak and baked potato dinner.