I have written often in these pages about the '98 vintage of Napa Cabs. It was much maligned by the pundits and was generally regarded as a disappointing vintage. The inferiority of the vintage was exacerbated by the fact it was 'surrounded' by stellar vintages. In fact the run-up to the '98 vintage was a run of four years of highest rated seasons, then '98, then another blockbuster year in '99.  Generally, any vintage of the nineties was a collectable highly rated vintage except '98. So it was that this vintage was the one to avoid, there were many great wines available, and the follow on year added to its demise as a non-collectable, non-respectable wine, a vintage to be avoided.

Here are the vintage reviews from Wine Spectator for the period.

So why is one vintage better than another? The 1998 vintage was a difficult year for growers due to the effects of the El Niño weather pattern that brought unusually cool weather and rain, both early in the spring and sporadically later in the season. This resulted in a fruit set that was small and late. The cooler temperatures continued on into the summer, with a few periods of heat where growers were concerned with sunburn. The result was uneven ripeness, irregular-sized berries, and an overall sluggish ripening. While September brought more suitable, drier, warmer weather, the harvest was delayed into late October, with some wineries finishing as late as November.

There was a silver lining in this clouded vintage with many great values emerging. Here is another testament to refute the prevailing views. There were many sleepers of the vintage, and because of their tainted lineage, they were and still are great bargains with high QPR (Quality Price Ratio). I've written often that I think the '98 has consistently been more approachable, and more pleasant drinking than the much heralded, revered '97, and could be obtained, in many cases (no pun intended), for half the price.

Note, this is not applicable across the region, we hold some Napa Cabs that live up to the deplorable reputation of the vintage, and are indeed the cause, not the effect. But, we're consistently rewarded for having gone against the prevailing views and stocking up on '98's that have proven wonderful wines with respectable aging potential, despite the belief they would be early gratification but short-lived.

Del Dotto produced such a wine in their Napa Valley Cabernet. This wine, even eighteen years later is delightful, while the '97 is just now starting to open and reveal its potential. Up until recently, I would have preferred the 98 over the 97. Their aging curves may only now be intersecting, and perhaps crossing. 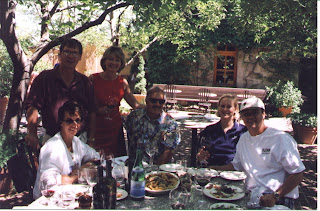 My on-line wine journal shows nine reviews of this wine dating back to our tasting of it at the winery in 2000. The earliest reviews rated it 92 points, indicating that early gratification, but half of them over the last six years were ranked 90 points. Only now is this wine starting to show its age as I deducted a point from my last four consistent reviews of this wine.

We hold over a dozen vintages of this wine going back to their inaugural vintage in 1993. We are now starting to appreciate its aging potential as some of the vintages are just emerging to reveal their true potential. I recently wrote the same thing, about such a phenomenon, regarding the great, super premium Dominus, Napa Valley Estate Red Wine, that twenty, even thirty years later, it opens to show its true greatness and potential. While perhaps not Dominus' equal, some of the Del Dotto releases are showing some of the same traits.

Cellartracker reviewer AlphaWillie wrote of this wine: "This bottle was great and did not have any of the issues that others have reported."

My early reviews of this wine attribute to it a blend of 80% Cabernet Sauvignon, 15% Merlot and 5% Cab Franc.

Posted by UnwindWine at 6:44 AM No comments: