Desert wine is nectar in a glass - essence of honey, apricot, violets - there is nothing like it under the sun. Among the absolute finest desert wines in the world are ice wines - wines from grapes allowed to lie on the vine beyond ripening, then past the winter freeze such that as much as eighty percent of the juice in the grape is frozen leaving behind but all the sugars in the remaining twenty percent of the juice. Such is ice wine which in North America comes from a small area in the Pacific Northwest where Inniskillin Okanagan operates in Oliver, British Columbia, and from Niagara-on-the-Lake, a small strip of land between the western tip of  Lake Ontario to the north and the eastern tip of Lake Erie on the south. The small land mass adjacent to the Niagara escarpment there traps the air to protect the grape vines. When the temperature reaches 8 degrees fahrenheit the conditions are right to harvest the grapes and collect the extracted sugar rich grapes suited for ice wine. Inniskillin Wines in the Niagara on the Lake appellation, licensed in 1974, the first winery to be licensed since 1929, has been producing and specializing in perfecting ice wines since 1984. Their Vidal Ice Wine from the 1989 vintage received the prestigious Grand Prix d'Honneur at Vinexpo in France. Inniskillin produces ice wine from several varieties of grapes including Vidal, Riesling, Chardonnay and even Cabernet Franc. They even produce a sparkling ice wine, which in other realms might be considered an oxymoron. Their 2006 Vidal Sparkling Ice Wine and 2007 Riesling Ice Wine won the Premio Speciale Gran Vinitaly "World Cup of Wine" in 2007.

We love desert wines and serve them with salads, artisan cheeses and of course with deserts ranging cake to petit fours to dark chocolates. So  when it came time to visit Niagara on the Lake, our whole focus was on Inniskillin, the house of ice wine. Readers of this blog know we have a fairly extensive cellar, with numerous desert wines from the world's finest producers from the finest wine regions - late harvest rieslings from California, Sauternes from Bordeaux, Trockenberenauleses (TBA's) from Germany and Austria, and of course ice wines from the Niagara escarpment.

Inniskillin, named for the Irish village from where GI's hailed who were stationed in the area during the great WWII, has 120 acres of vines, and purchases grapes from local producers from another 250 acres to source the grapes for their wines. Their specialty and flagship wines are ice wines.

During our visit to Niagara and Inniskillin, we were honored to meet the legendary Don Zeraldo, one of the founders and former co-owners of Inniskillin. He was responsible for championing the creation of the Niagara on the Lake AVA, and with the oenology institute there that grants certificates and degrees in viticulture and oenology. And of course with the development and perfection of ice wines in partnership with Karl Kaiser, the father of Niagara on the Lake ice wine.

The tour of Inniskillin starts in the visitor's center, rumored to have been partly designed by Frank Lloyd Wright (more on that later). One then tours the vineyards, source of the Vidal and Chardonnay grapes for Inniskillin wines, followed by the crush area. The tour visits the cellars and sees a movie of the legacy and heritage of Inniskillin wines featuring the vision and work on Don Zeraldo and Ken Kaiser. One sees the working Inniskillin cellars seeing aging wine in both barrels and bottles, culminating in seeing the wine library featuring bottle storage from the early vintages from the mid-eighties through  recent vintages. 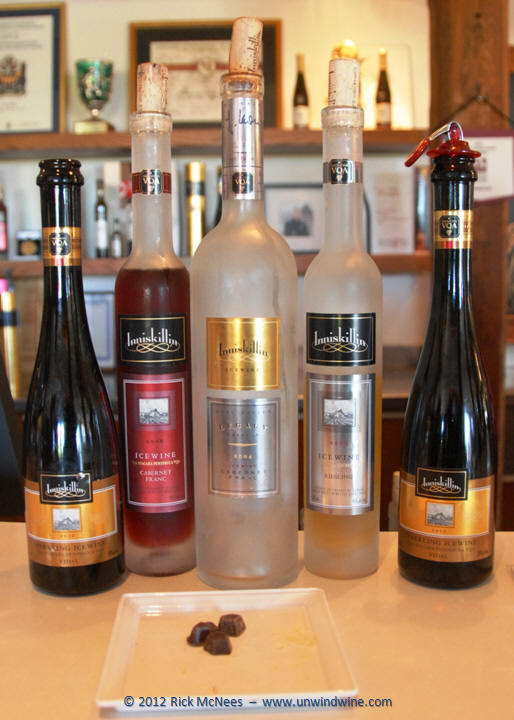 Finally one is treated to a tasting in the tasting room which in fair weather is outdoors, or otherwise indoors in the visitor center. We were treated to the public tour tasting and then a special tasting of select Innikillin wines. We tasted the following Inniskilllin wines: 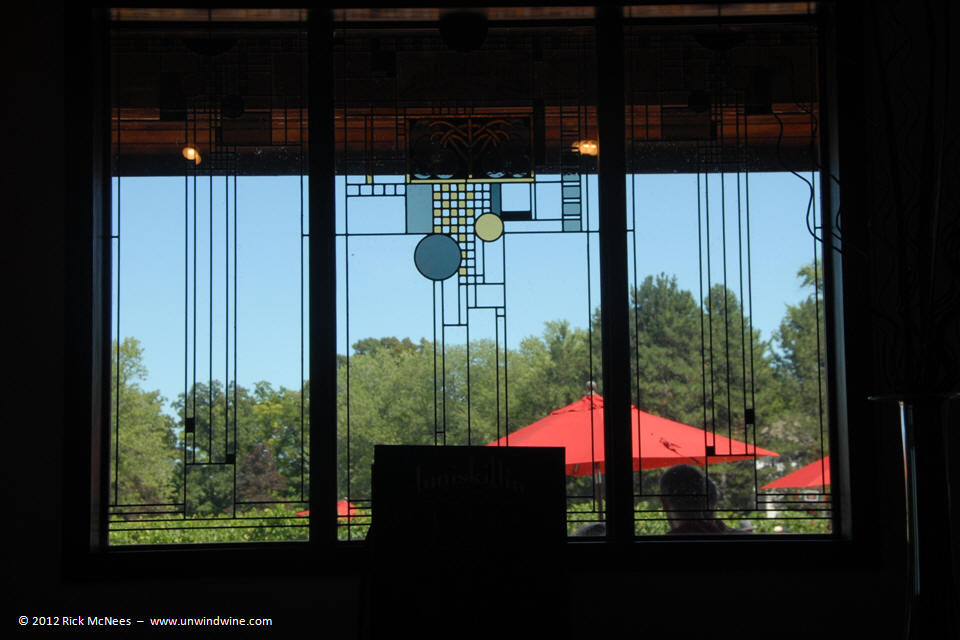 The staff at Inniskillin spoke to the connection between the winery and Frank Lloyd Wright. The legend of Wright and Inniskillin  is that the property was owned by the Larkin family during the period when they commissioned Wright to design the Larkin Corporation headquarters building in Buffalo. The current winery visitors' center is situated in a barn that was built at that time. The recent owners of the winery decorated the buildings and grounds whth Frank Lloyd Wright inspired decor such as light fixtures, ironwork and windows. One window (below) is a reproduction or knock-off of the famous 'ballon' design windows from the Avery Coonley kindergarten in Riverside, Illinois. An original of these windows is displayed in the Art Institute of Chicago and they are the basis for many popular designs. 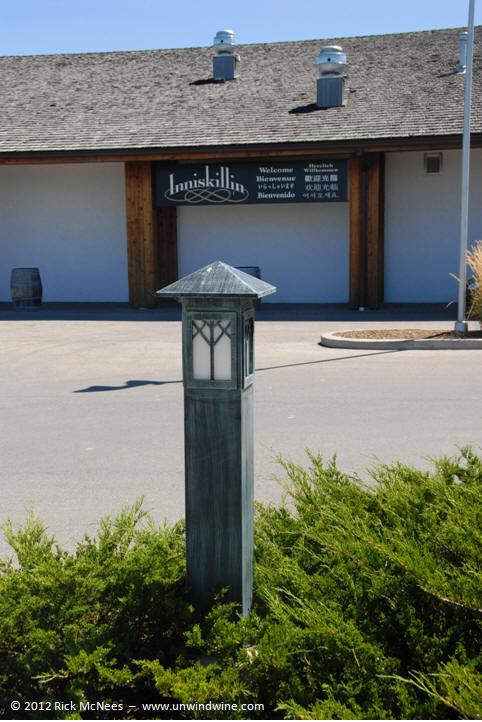 Ironically, the dual purpose of our to Niagara region was to visit Inniskillin and to tour the  Darwin Martin House and Complex in Buffalo, designed by Frank Lloyd Wright around the turn of the last century during his golden era of the Prairie Style of architecture. As a docent interpreter for the Wright Home and Studio in Oak Park, Illinois for the Frank Lloyd Wright Preservation Trust, I was also the research captain for Wright Plus 2012 for the William Martin House in Oak Park. William Martin commissioned Wright to design his home in Oak Park in 1903. During this time, he introduced his younger brother Darwin Martin to Wright. This lead to the commission for Wright to develop the Martin House and related buildings, and eventually the Larkin Building. Darwin Martin was the financial officer for the Larkin family and their soap and home products company.

In speaking with Don Zeraldo, former principle of Inniskillin. I intimated that I didn't buy into any theory of a connection between Wright and the winery property. He acknowledged that while this was a popular legend, there is no hard evidence of such a connection.

Some of the Wright inspired decor is shown here.
Posted by UnwindWine at 4:22 PM No comments: