I pulled this Robert Biale 'Black Chicken' Zinfandel from the cellar to serve with our barbecue beef and ribs dinner week before last and never opened it. It was still in the wine cooler adjacent the kitchen, where we 'stage' wines before drinking, so I pulled it for Sunday evening dinner of meatballs, some artisan cheeses and fruits.

Since 1937, the Biale family has grown Zinfandel along with assorted other varieties on their farm just outside the town of Napa. Today, Robert Biale produces an extensive portfolio of Napa Valley Zinfandel wines. This is his 'signature' wine that dates back to the days of prohibition when Black Chicken was the proxy code name for bottles of red wine.

It goes back to the days when as a 14 year-old, Aldo Biale helped his farmer, grower and wine producer mother to make ends meet by selling to insider Napans, chickens, eggs, prunes, walnuts and vegetables, and some of the family’s homemade Zinfandel. Over the old “party line” phone system, the code words “a Black Chicken” signified a jug of bootleg wine … and kept nosy neighbors and the authorities from finding out about Aldo’s underground Zinfandel operation!

The Robert Biale estate lies within the Oak Knoll District in southern Napa Valley just above the town of Napa and has several vineyards from which they source several single vineyard designated labels in addition to this, their flagship label. Black Chicken is primarily sourced from Biale's Oak Knoll District ranch estate. 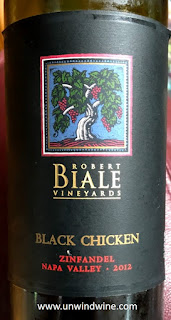 This label was awarded  92 points by Wine Enthusiast,  91 points by James Suckling and Wine Spectator.

I found it a bit 'flabby', not living up to its high accolades, perhaps because I held it too long, opening it after seven years from release. Dark ruby colored, medium full bodied, rich dense, James Suckling called it a 'funky old vine character ... with mushroom and bark undertones', sweet jammy black berry, spice, sage, anise and what WS calls 'smokey caramel' on a peppery finish.

Several other Cellartracker members had similar experiences with this label. One wrote, "I suspect that I held this too long. Not jammy (good) and not noticeably hot. Decent nose. Very (too) smooth. Various red and black fruits, but minimal berry/bramble notes. Pleasant medium body and a good finish. Unfortunately, the absence of tannins made it less-than-suitable with food (BBQ in this instance). Other recent notes don't mention this, so maybe it was an off bottle."

Another one wrote, "Nice enough and well balanced. However, everything is somewhat muted, and tannins are conspicuously MIA. Definitely well past its peak."

Posted by UnwindWine at 1:25 PM No comments: