Long time friends Pat and Maureen poured out the cellar (pun intended) for our visit to Bluebell in suburban Philadelphia and an intimate poolside visit and dinner. An interesting selection of a Napa Valley classic big red Dominus and a couple of delightful new Napa Cabernet discoveries that they found at the local wine shop. 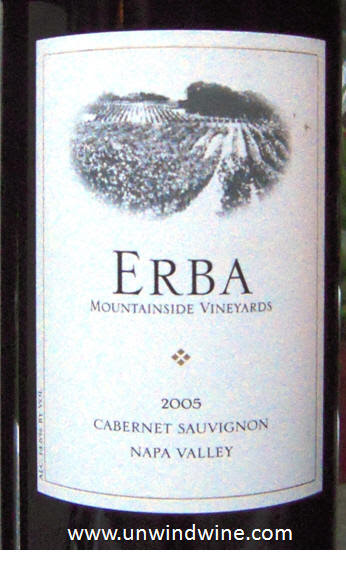 Wow, what a find in this new emerging Napa Cab. Watch for great things to come from this exciting new producer Paul Erba, proprietor, and winemaker Denis Malbec.

Winemaker Denis Malbec studied viticulture and oenology  in France and worked for the storied first growth Chateau Latour starting as one of the cellar workers in 1993 and moved up to enologist and cellar master in 1994, making the vintages from 1994 to 1999. Denis consults several boutique wineries in and around the Napa Valley including Kapcsàndy Family Winery, Blankiet Estate in Yountville, and Captûre Wines and Respite in Sonoma.
Taking some points from the winemakers' notes, this big cab has dark inky purple color, big full bodied, bouquet of cassis liqueur, graphite, violets and smoke give way to big forward flavors bold blackberry, blueberry and plum with subtle spice, tobacco and leather accents giving a supple lush mouthfeel. The long finish exhibits polished tannins with a nice balance of vanilla and toasted oak. We started with this Cabernet and it was fabulous with artisan cheeses and starters. It would be superb with dark chocolate!
Blend of 89% Cabernet Sauvignon, 3% Cabernet Franc, 6% Merlot, 2% Petit Verdot.
RM 93 points.
Readers of this blog will know that we love big bold mountain fruit wines. I've not seen this wine before but will definitely be on the lookout for this label for great drinking now and collecting for future enjoyment. 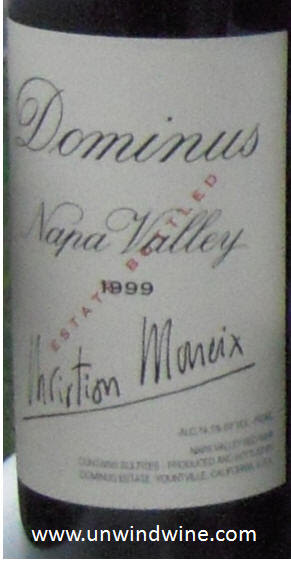 The 1999 vintage of the iconic Dominus was Number 11 on Wine Spectators Top 100 Wines of 2002! This vintage was characterized by its extremely long growing season - a season where patience eventually paid dividends in the form of wine with outstanding character and complexity.

This wine is very Bordeaux-like, true to its heritage and blend of  75% Cabernet Sauvignon, 13% Cabernet Franc, 9% Merlot, and 3% Petit Verdot.

The 1999 Dominus is dark garnet colored, complex and polished - a symphony of integrated flavors and silky smooth tannins - not a big powerful wine but certainly full bodied and flavorful. Delicate floral bouquet gives way to black berry and black cherry fruits with a long fragrant finish of soft oak, spice and hint of cedar and leather earthiness.

We last tasted this wine Dec 8, 2005 in Chicago at a Dominus Napa Valley Red Wine vertical tasting with the producer Edouard Mouiex that featured Dominus from vintages 1996, 1998, 1999, 2000, 2001, and 2002. My Tasting Notes and Commentary at that time said it needed more time. My rating for that tasting was the same as this time.

We have one bottle left from a case of 1986 Dominus that we pulled from and tasted periodically over a decade and a half, when it burst open with fragrance and complex flavors to fully reveal itself, by which time we were down to the final couple of bottles. I remember at that time exclaiming, 'THIS is what Dominus is all about!" I sense the 1999 was similarly subdued withholding its true character and potential that will fully emerge in a couple more years, or perhaps this is all it has to offer. I look forward to opportunities to find out!

We saved this one for dinner and it was the perfect complement to the sirloin steak with roasted potatoes and green beans.

Another discovery of a new emerging producer of Napa Cabernets, Oliver Hill is not to be confused with the Australian producer of jammy Syrahs with the same name. This is the collaboration of college roommates Mike Oliver, the grower, and Jerry Hill, the wine maker/owner. Mike provides Cabernet and Pinot Noir grapes and Jerry handcrafts wine in small batches producing less than 500 cases a year.
This 2005 Oakville, Cabernet Sauvignon is their first commercial release the using the Oliver Vineyard Cabernet grapes sourced from Cabernet Sauvignon vineyard clone 7 planted in 1993. The 100% Cabernet from the Oliver Vineyard, Oakville is barrel aged 36 months in French Oak.

The 2005 Oakville Cabernet medium to full bodied with aromas and flavors of black berry and cherry fruits, hints of dark plum, cola, mocha and cinnamon with lingering soft tannins on the finish. Released at $28 an advertised in the $20-25 range, this wine represents great QPR (quality to price ratio) in a Napa Cabernet.

Posted by UnwindWine at 10:00 PM No comments: