One of the stops during our NYC getaway weekend was a short stopover visit to Restaurant Row near the theatre district. Linda discovered this by accident with the kids on a previous trip and it was on our visit list to see and experience this weekend. A drop in snack and wine tasting turned out to be one of the highlights of our weekend.

Our kids who are Manhattan residents had heard about but never been there - what a surprise when we discovered it was near one of their offices and they were in the nearby neighborhood almost daily.

Restaurant Row is simply two blocks of 46th Street, between Broadway and 9th Streets - a neighborhood with over twenty restaurants - one after the other, adjacent to the Theatre District.

There is an amazing wide variety of cuisine from all around the world, according to their promotional website, the range is: American (New), American (Traditional), Asian Fusion, Brazilian, Breakfast, Brunch, Burgers, Cajun/Creole, Chinese, French, Irish, Italian, Japanese, Latin American, Middle Eastern, Pizza, Russian, Seafood, Soul Food, Spanish/Basque, Sushi Bars, Tapas Bars, Thai, Turkish, Vegetarian and Vietnamese. There is a choice of a half dozen Italian eateries, and a couple each American, Latin, French, Spanish and so on.

Legendary Restaurant Row is an authentic Times Square and New York institution where you can choose from cuisine from all over the world, sample the styles of celebrity chefs, and join Broadway stars at some of their favorite haunts.

In between meals, we dropped in for a mid-afternoon respite for some small plates and wine. We stopped at "Don't Tell (your) Mama", which has a bar, a restaurant, a piano bar, two separate cabarets, and outside alfresco dining in one small compact site (see gallery, below).

We selected four wines by the glass (WBTG) and three small plates, shrimp cocktail, crab cakes, and a salad. It was a perfect setting for enjoyable, casual food and wine tasting in a picturesque, cosmopolitan, fun setting.

From my seat, I was able to watch the cabaret rehearsal in the club to the rear.

For our Wine Flight, we selected a Russian River Valley (RRV) Sonoma Chardonnay, a RRV Pinot Noir, and Sauvignon Blancs from Sonoma and Napa Carneros.  Unlike usual custom in this blog, I don't have the label specifics of the different wines and hence don't offer a review. You'll have to visit Don't Tell Mama for your own tasting flight. We'll be back, our next trip to NYC! 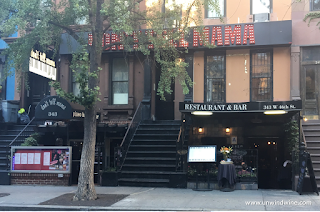 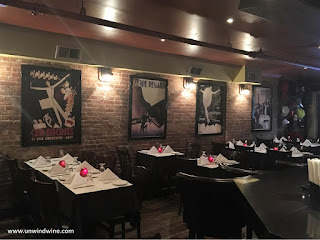 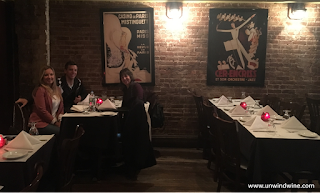 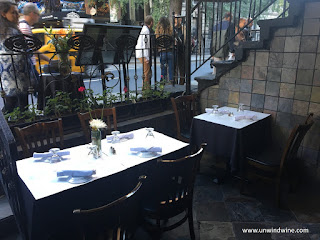 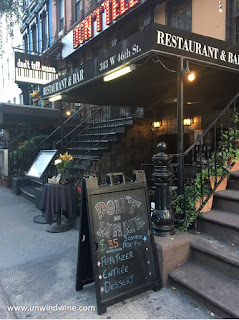 Posted by UnwindWine at 6:04 PM No comments: