This is our 50th Cabernet Sauvignon review of this year - 45 of which are from Napa Valley. 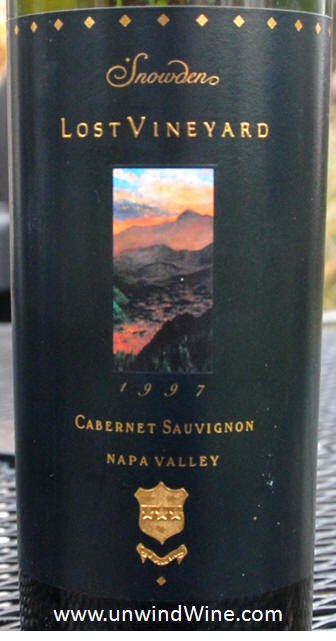 Down to the last few bottles of a case acquired upon release in the late nineties. Consistent with earlier tasting notes taking into account the evolution of this aging wine. Starting to show its age a bit as the dark garnet color starts to take on a slight brownish rust hew and the fruit is starting to fall off a bit and give way to the smoke and leather nose and flavor. Still firm and tight with the smoky leather predominating over the dark berry and black cherry fruit, with forward pronounced cedar and a hint of cassis and a full fragrant firm tannin lingering finish with a bit of tight high alcohol heat. Bordeaux style blend of Cabernet Sauvignon, Merlot, Cabernet Franc and Petit Verdot tastes true to form like a lower left bank Bordeaux!
RM 89 points.

https://www.cellartracker.com/wine.asp?iWine=34315
We first were introduced to Snowden wines when we featured Randy Snowden at a Winemaker's luncheon at Brix in Napa Valley during our Napa Wine Experience back in 1998. Randy and his brother Scott, both attorneys, preside over the property that sits 450 to 850 feet above the Silverado Trail. The property was acquired by their parents back in the fifties. My recollection from that meeting was that their father Wayne Snowden was a professor at UC Berkeley when he acquired the property in 1955. After he passed away in 1977 the brothers took over in 1981. They produced their first Snowden label vintage in 1993. Most of their production is sold to Silver Oak, Frank Family Vineyards, Viader and in recent years, David Ramey.

During these Napa Wine Experience visits of 1997 through 2000 we hosted gala tasting dinners with the 'Undisccovered Dozen' "emerging new wine producers to watch", featured in an article in Wine Spectator Magazine. Many of these producers released their inaugural vintage releases in or about the 1994 vintage.  Those producers and winery visits included Plumpjack, David Arthur, Clark-Claudon, Robert Craig, Del Dotto, Elan,  Paradigm, Pride Vineyards, Snowden, Nils Venge and White Cottage. They are featured on my winesite http://www.unwindwine.com. A complete index of my tasting notes of these wines over the years is on the site at this link to California Producers Index. These producers make up a foundation of our wine cellar collection even today. In many of these wines, we still have vertical selections of these wines, some dating back to those early release vintages.Another of these tasting events is featured in my unwindwine blog http://unwindwine.blogspot.com/2011/07/plumpjack-napa-valley-oakville-estate.html.
This was Snowden's second label from that era. It was a great compliment to Sunday dinner beet pot roast with roasted carrots, onions and potatoes.
http://www.snowdenvineyards.com/

Posted by UnwindWine at 2:41 PM No comments: