For a quiet relaxing evening watching Christmas movies with Linda over pizza, I pulled this aged Chiarello Vineyards Petit Shirah from the cellar as a literal and classic 'pizza wine' - aka moderately priced 'every day' wine for drinking with pizza. Based on the price I paid nearly a decade and half ago, this exceeded both of our expectations being big, fruit-filled, forward and complex. Researching it further I see I got a good deal on this wine at $20 as the ASP, average selling price today is $60 and $65 for later vintages. What a nice surprise to find this gem in the cellar!

I admit that prior to opening and tasting, and subsequently researching this label further to produce this blogpost, I don't recall having prior knowledge of this producer or winemaker.

This wine is produced by Michael Chiarello, noted Napa Valley chef, Emmy-winning TV personality, author, founder of NapaStyle, who applied his culinary skills and personal flair for layering flavors to a new challenge—making small productions of handcrafted estate wines. His small winery, Chiarello Family Vineyards, makes five estate grown wines from 20-acres  around his home in the central Napa Valley. This wine is from his 4-acre parcel of 96 year-old vines that yield a mere 100 cases of wine.

Chiarello is collaborating with Thomas Brown, one of the top "old vine" winemakers in Napa Valley, known for crafting rich, dynamic wines from the ultra-ripe fruit of from the 94-year-old Petite Sirah and Zinfandel vines on the Estate.  Thomas Brown was "2010 Winemaker of the Year," by Food & Wine Magazine.

Thomas Rivers Brown hails originally from South Carolina. After graduation from the University of Virginia he traveled the wine regions of France, and eventually made his way to Napa Valley in the mid-1990's. He worked with and earned the craft as cellar hand and lab enologist for notable winemakers Ehren Jordan and Larry Turley of Turley Wine Cellars. In 2000, Thomas got his chance to produce his own wines when he was appointed winemaker for the new winery project Chiarello Vineyards.

Since then, in addition to Chiarello, Thomas has overseen winemaking operations or consulted for many well known Napa Valley wineries including Schrader, Outpost, Maybach, Revana, TOR, C. Mondavi, Jones Family, Harris Estate, Hestan, Seaver, Black Sears, and Casa Piena. He also has his own wine label, Rivers-Marie, where Thomas Brown focuses his efforts on Pinot Noir.

Thomas Brown has been called "the nation's hottest winemaker." by David White of The Terroirist Wine Journal., He is one of but a few winemakers globally to have received multiple 100-point wine scores from the penultimate wine critic Robert Parker Jr. of The Wine Advocate, as well as from wine noted critic, James Laube of The Wine Spectator. It was in 2010 that Thomas was honored as Food & Wine Magazine "Winemaker of the Year." 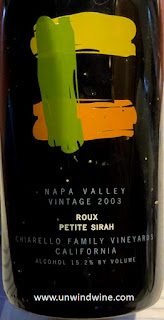 At fourteen years of age, this 2003 was drinking well and seemingly still at the apex of its drinking window, although certainly not likely to improve any with further aging.

We discovered, tasted and acquired this wine during our Whitehall Lane Napa Valle Vineyards and Winery Estate visit and tasting during our Napa Valley Wine Experience 2018 back in August. We opened this for casual midweek sipping with bar-be-que and some artisan cheeses and fruit. 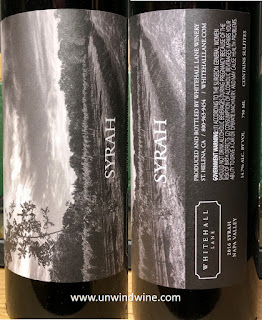 As written in our recent tasting notes when we opened this on release and receipt, "This showed dark inky purple colored and full body with layers of blueberry and currant fruits accented by notes of subdued pepper and hints of cinnamon. I defer to the eloquent and artfully drafted tasting notes from the winemaker below."

"The 2016 Luchtel Vineyard Syrah offers fragrant notes of mixed berry compote, violets, blueberry fritter, white pepper, and baking spices. On the palate, the tannins are soft and supple, while the flavors are showing sweet red currants, stewed black plums, beetroot, rhubarb, and a touch of cinnamon."

Posted by UnwindWine at 5:16 PM No comments: