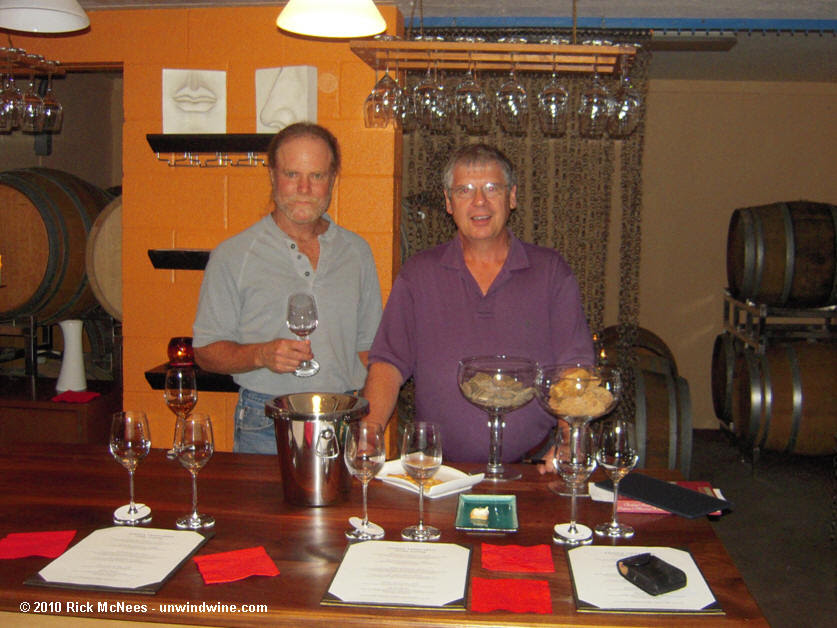 We tasted and purchased this Claret Bordeaux style blend bottle at the winery back in the summer of 2010 during our Virginia Wine Country Tour 2010. Winemaker and proprietor Jim Law (left) and his Linden portfolio were by far the best in class producer of Bordeaux varietals we found from Virginia, most notably 'Hardscrabble', their flagship single vineyard designated Bordeaux blend label. We also tasted, liked and purchased their Late Harvest Vidal dessert wine.

The term 'Claret' dates back to the 1700's in England, and the colloquial reference to red wines from the Bordeaux region of France. Britons were large consumers of Bordeaux wines, although during the times they were at war with France, they switched to and popularized Port, hardy fortified red wines from Portugal.

Today, Claret refers to red wines blended in the Bordeaux style from the classic Bordeaux varietals - primarily Cabernet Sauvignon, Merlot, Petit Verdot and Cabernet Franc. Another trademarked term (subject to license from the Meritage Alliance) for these wines from the new world is Meritage, as written in this blog on subject.

The connection between Virginia and Bordeaux Claret dates back to colonial times when Secretary of State Thomas Jefferson discovered Bordeaux wine while living in France negotiating support for the American Revolution. Jefferson lived in Paris from August 1784 to September 1789 and traveled extensively through the wine regions of France and northern Italy. He brought back to his Virginia estate Monticello not only French wines but also vines to propagate French varietals in the new world. He spent the rest of his years trying to develop those vines and wines in Virginia. 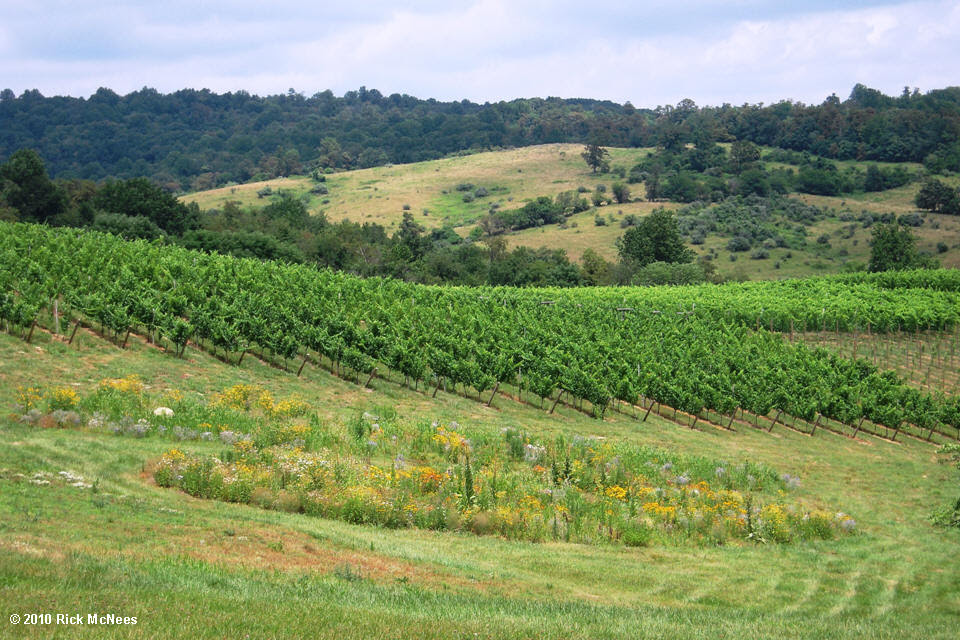 Linden Vineyards, named for the town of Linden, sitting just 65 miles west of Washington, D.C., produced their first vintage in 1987 and their first release and opening of the winery was in 1988. Law has been honing his craft, working the vines and producing wine in the Virginia Shenandoah Valley since 1981. He purchased the abandoned hardscrabble farm in 1983.

Linden grow their Bordeaux varietals on their eighteen acre premier estate Hardscrabble Vineyard (shown left), and a couple nearby vineyards sitting high up the Blue Ridge Mountains at 1,300 to 1,400 feet with an eastern to southern slope. The vines are from 5 to 25 years of age. 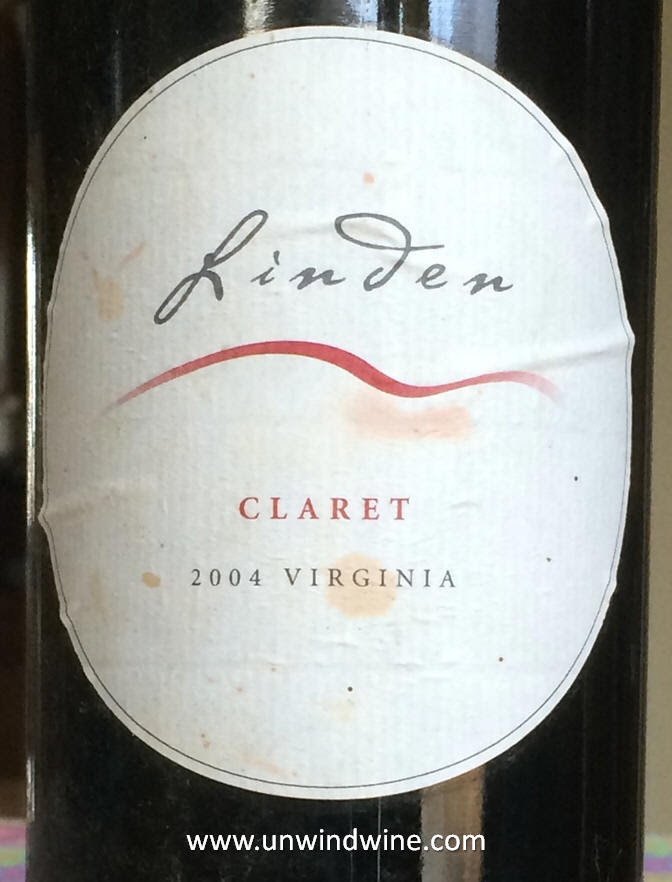 Another vineyard sits high on a bluff above the town of Front Royal in the Shenandoah Valley at an elevation of 600 feet, facing west on light, deep, well drained loam soils, planted in 2000.

We still hold several Linden labels from that trip and based on this bottle, its time to try them, although I expect the Hardscrabble Bordeaux Blend and the Late Harvest Vidal to have longer lives than this label. 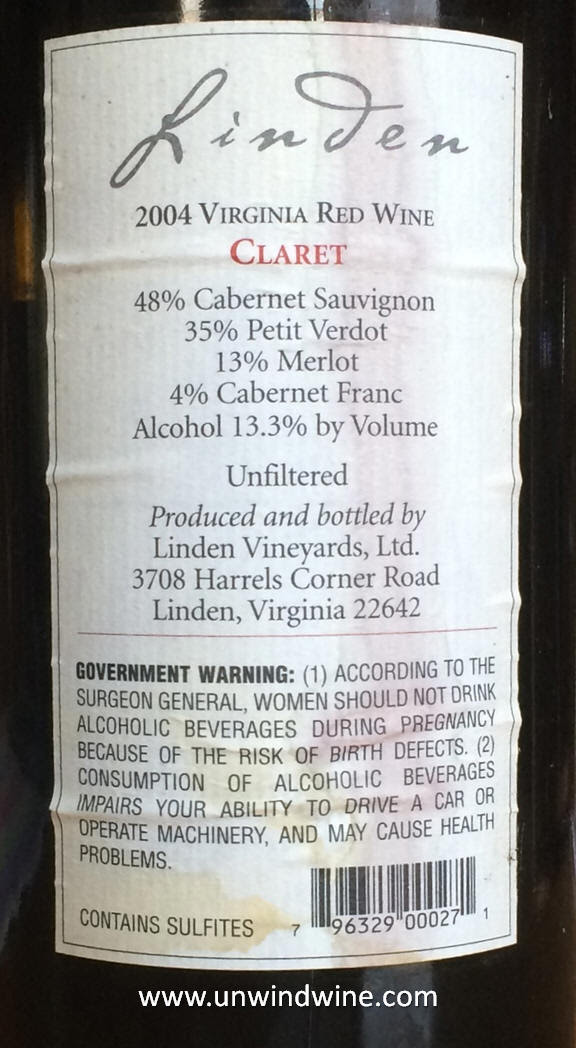 At eleven years of age, this is clearly past its prime and nearing the last chapter of its drinking window, but still holding enough to be casual easy drinking with some hearty cheese, dark chocolate and grilled beef. Our first and most recent tasting of this wine from our cellar was in 2008 at which time we gave it 88 points. See Linden Virginia Claret 2004 - April 4, 2008.

Dark blackish garnet colored with an ever so slight tinge of brown setting in, medium bodied, somewhat lean and austere, black berry and black cherry fruit aromatics predominate with tangy fruit flavors giving way to a layer of cedar, black liquor, black creosote/tar tones, and ripe raisin from the diminution of the fruits, with a tangy spicy cherry on the lingering tannin finish.

Posted by UnwindWine at 7:23 PM No comments: