Constant Diamond Mountain Cabernet Sauvignon 1998 -
The adventure, joy, and perils of holding vintage wine for a couple decades or more ...

Son Ryan came over for the evening and we went down and dug deep into the cellar to pull out this aged 1998 vintage release Constant Diamond Mountain Vineyards Napa Cabernet Sauvignon. We acquired this wine at the Estate during our Napa Valley Wine Experience back in 2011. My early blogpost of our visit to Constant Diamond Mtn Vineyard was here.

I’ve written often about the 1998 vintage Napa Cabernets. It was widely panned as being a subpar vintage, especially after the much heralded block buster ’97. As a result, prices on the 98 releases were lower, especially after a couple of years when 98’s were still sitting on the shelves and the vintage was considered lackluster relative to the range of choices of more favored releases.

Lo and behold, IMHO this represented an opportunity to pick up quality wines at bargain prices when compared to the higher price points on the highly rated releases. Ironically, a decade, and now two decades later, those wines were and are often tasting very nicely and in some cases are on par equivalent to some of the other vintage releases.

Often, ‘off’ vintages can provide great QPR (Quality Price Ratios). Of course, perhaps just as often, off vintages are just that, ‘off’ in terms of quality in some way or other, due to whatever shortcomings that vintage suffered, excessive heat, not enough rain at the right times, or too much rain at the in-opportune times, all suppressants to the realized quality of fine wine.
This disparity was magnified perhaps by the fact that the much heralded 97 vintage in many cases, never achieved its lofty accolades and expectations – too closed, too tight, too subdued, or some other diminution of expectations.

Perhaps its time will come as the ‘lesser’ 98 reaches and surpasses its prime drinking window and eventually end of life, while the 97, a longer lived vintage, lives on, and perhaps still realizes the apex of its potential, late in life. It can happen. . So, caveat emptor. Don’t be afraid to invest in ‘off’ vintages. The price differential can be significant with savings of 50% or more.

Often, only in such years are some of the higher rated, ranked wines approachable or affordable. Take advantage to experiment, if you dare. You might be mightily rewarded. Or, your lowered expectations will be met.

Another related point, my wine buddies have heard me talk about my experience with a case of Dominus Proprietary Red Wine that I purchased on release back in 1986. Dominus, the Napa Valley project of legendary Bordeaux owner/producer/winemaker Christian Moueix often trades at super premium prices, and tends to be a long lived wine, in the tradition and style of sophisticated, complex Bordeaux’s.

Those early Dominus labels featured pencil sketch drawings of Christian Moueix on the labels for the first decade, up until the 1991 vintage release.

With that 1986 Dominus, I was patient, and waited, and opened a bottle of the 1986 around 1989 or 90. It was lackluster, rather closed and tight. I waited another couple years with the same effect. This exercise was repeated several more times until about 2006, when at twenty years of age, two decades, it showed complexity, polish, balance, breadth and depth – the attributes of its true character and potential one might hope for or expect from the pedigree’d label. Alas. That is what Dominus is supposed to taste like. But then, ahah, I only had three bottles left to experience its magnificence.

While its fun to enjoys one’s investment in a cellar, with case lots of wine, to experience how a wine will age and mature and hopefully improve over time, there is the real risk of drinking your wine too early, or holding it too long. I now realized I drank many of my Bordeaux from quality 1980’s era vintages too young. But, I also fairly often come across a bottle that I held on to too long, especially if it got overlooked or lost in the cellar, or just got passed over too many times for something more appealing or exciting. Such is the art of collecting fine wines.

Most folks would think that we hold onto our wines too long and drink them too late. Count my wife, Linda in those ranks. We look at it as part of the adventure. 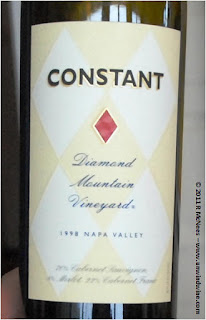 My previous tasting of this label was in March of this year when I had a similar tasting experience and wrote: "Some bottles of this vintage are at or nearing their end of life and need to be consumed. While at the end of or past its prime drinking window, this bottle was still holding its own, maintaining its fruit and some of its terroir character and profile.'

"Dark garnet colored with some slight bricking in color, medium bodied, the black fruit is giving way to notes of earth, spice, leather and hints of vegetable with modest tannins. Time to drink up but this was still pleasant drinking."

Tonight, this 1998 Constant was drinking very nicely – probably as good as ever, and most assuredly not likely to improve any with further aging, and very likely to start to diminish from this point forward.

Not for the casual feint of heart drinker, son Ryan and I enjoyed it and its ‘maturity’ immensely, and we opened something more ‘youthful’, or ‘approachable’ for Linda and the others.

Bon chance!
Posted by UnwindWine at 8:23 PM No comments: