This Les Granières de La Nerthe is the “second” wine of Château La Nerthe, made from younger vines from the Estate. This is a Rhone style blend in the following proportions:  45% Grenache, 24% Syrah, 18% Mourvedre, 8% Cinsault, and the balance of 5% from “others”. While these are the typical primary varietals of a CDP, it should be noted that the Châteauneuf-du-Pape appellation rules allow for up to thirteen specified varietals to be included in the blend. Their second label is aged for a shorter period of just 6 months in a combination of cement vats and larger oak foudre that results in a more fruit forward style of Châteauneuf. 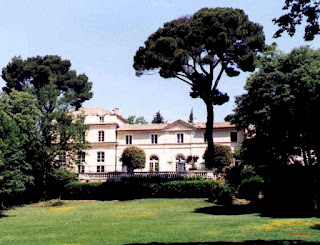 I note that I visited the historic Château La Nerthe (right) during my Châteauneuf-du-Pape tour back in 1998, so I follow and collect this producer's wine. Château La Nerthe have been producing wines at the Estate since 1560. The label seemed to disappear from our market for a couple years so I was happy to see it reappear on the shelves at Binny's, our local wine merchant.

That said, their premier label Chateau La Nerthe Chateauneuf du Pape Cuvee des Cadettes is now at a new price point at $125 per bottle, significantly higher than what I would consider to be comparable benchmark wines such as Chateau de Beaucastel Chateauneuf du Pape or Chateau Vieux Telegraph. I should note it was reduced to a sale price to be more comparable to those other labels. I purchased some at the lower price. At less than half the price however, Les Granières de La Nerthe does offer CDP at a more affordable QPR (quality price ratio). These are two other Estates that I visited during this trip that I also collect for our cellar. Interestingly, the 2015 Beaucastel contains all thirteen of the CDP grape varietals. 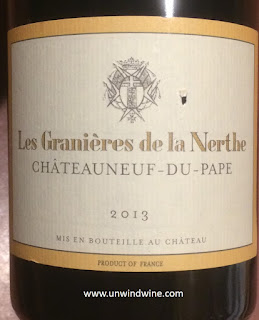 While I was delighted to discover this second label of La Nerthe in our market, I admit I was a bit disappointed by it, perhaps due to my lofty expectations, or hopes. I was excited to try this so I bought some and made a point to pick up some BBQ brisket on the way home to try the combination. Perhaps, or apparently, my expectations were unrealistic, comparing it to the flagship first label.

This was garnet colored with a slight brownish hue, not due to deterioration, somewhat opaque, medium bodied, lighter than I expected. The flavor profile is what Wine Spectator aptly referred to as "racy red currant and raspberry coulis flavors, enhanced by twinges of blood orange, tea and singed sandalwood".

WS gave it 90 points. I give it 88 points due the lighter body, more subdued fruits, and narrow flavor profile. I believe this might also be due to the higher percentage of Grenache in the blend over the more fruit forward Syrah which we tend to favor. I'll try it again tonight after opening and settling and see if there is affect.

Posted by UnwindWine at 8:08 AM No comments: