Another episode in the ongoing quest for a high QPR (Quality-Price-Ratio) Pinot Noir presented this selection from this emerging producer, suggested by Ron B at Binny's Willowbrook. We've known Ron for about two dozen years in his service at no less than four or five wineshops that we frequent. We were in the store to pick up more of the Black Diamond Pinot Noir that we featured recently here, which served as our benchmark for comparison. While a notable interesting and flavorful selection, this Banshee Sonoma County Pinot Noir did not stand out as did the Black Diamond. This is a new label discovery and an interesting and pleasurable wine that, while not a blockbuster, is fairly priced at $20. This emerging producer has developed relationships to source grapes from noted vineyards throughout Sonoma County from the Sonoma Coast to the river valleys, to the mountains and is worth watching as this producer and their artwork evolve.

Banshee is the product of three friends and fellow wine-geeks who followed their dreams in a quest to produce quality good value Pinot Noir in California. Noah Dorrance who serves as Winemaker began his wine interest as a freshman at the University of Missouri where he would host wine tastings in his dorm room. After college, he spent two years in Paris with Hotels.com where he explored French, Italian and Spanish wine regions on the weekends in his exploration into the world of wine. He then spent time at San Francisco-based Crushpad, where he assisted customers in making and marketing wine. It was there he made the initial version of Banshee. The economic downturn around 2009 gave Noah and his friends Baron Ziegler and Steve Graf the opportunity to purchase grapes from several high-end vineyards and Banshee Wines was officially born. Noah now serves as head winemaker at Banshee Wines, Baron and Steve do sales, marketing and operations.

Baron Ziegler, a native of Minnesota, began buying Bordeaux futures at the age of 15, attended Boston University during which time he worked in retail for Food & Wine Magazine’s 2012 “Top Sommelier” Peter Eastlake. He moved from there to a wine importer and moved to California where he met up with Banshee co-founders.

Steve Graf, attended the University of Pennsylvania and discovered his love for wine while studying abroad. After graduation he worked for notable Manhattan wine merchant Sherry-Lehmann. He moved to California with stints at E.&J. Gallo Winery and Vintage Berkeley, a boutique wine shop, and worked for a couple of importers.  He joined up with Baron who happens to be his brother-in-law and Noah to found Banshee where Steve now runs West Coast sales operations. 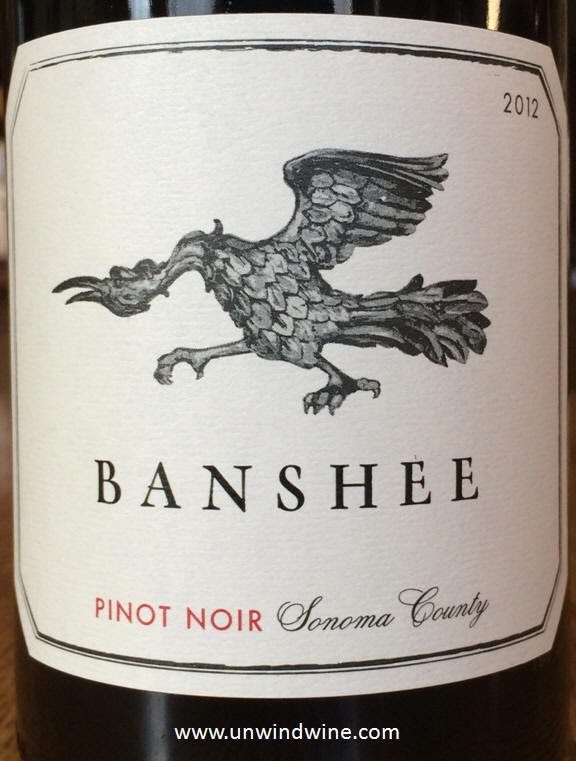 This 2012 release of Banshee Sonoma County Pinot Noir shows garnet color and light body; the fruit is overtaken by that classic Pinot dusty rose signature, overshadowed further by an interesting but somewhat strange and slightly distracting layer of green pepper with a tone of alcohol and hint of camphor. I struggled a bit to describe this and then went to the winemaker's notes who described it as "forest floor .... and between just ripe raspberries and boysenberry against a frame of rhubarb and pine." Interestingly similar if you interchange my green pepper with rhubarb, and my camphor with pine, you get the idea.

Never-the-less this was balanced and approachable and Linda liked it.