Nephew Chris, on leave from his tour in Central Asia, visited Napa/Sonoma wine country and shipped several bottles back to me, Uncle Rick, and cousin (son) Ryan. In tribute to Chris we opened one, this Liana Estates Vintners Blend 2015 which he tasted and obtained at the winery during his recent visit and tasting/tour. Thanks for thinking of us Chris!

We served this while we were all gathered for a family pizza dinner following the gala birthday party for grandkids Lucy and Jessie.

We thought this would be a fitting 'pizza wine' and we were right.  Ryan noted it tasted like a Coonawara Cabernet with its ultra-ripe rich concentrated raisiny fruit. Garnet colored, medium-full bodied, the pronounced ripe raisiny black fruits were accented by notes of creosote, tar, peppercorn, smoke and tobacco leaf. It was well suited for pizzas for the birthday celebration dinner and begged for some (bitter dark) chocolate afterwards. 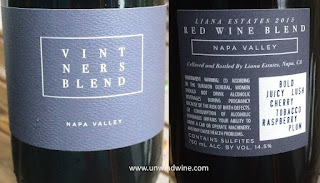 According to the rear label, this wine was cellared and bottled by Liana Estates, hence they sourced (Napa Valley) juice from an unnamed Napa Valley supplier.

On further investigation, Liana Estates is named for sisters Lisa and Ariana, the second-generation of the long established Napa Valley Peju winemaking family. Liana Estate was established in 2016 as a family owned and operated winery in the Carneros region of Napa Valley, down at the bottom of the Mayacamas Mountain range that separates Napa from Sonoma overlooking the San Pablo Bay.

Liana Estates sits on the site of the former Acacia Vineyard in the Carneros AVA, on 100 acres of land, of which 40 of are currently planted in the Carneros classic varietals Pinot Noir and Chardonnay. They cite that they will also focus on 'fun and unique varietals that may vary year-to-year', such as this release.

The Liana winemaker (at Liana but not necessarily for this wine) is Sara Fowler, who indicates "a passion for finding “forgotten” or “lost” varietals and bringing them to life in Carneros". She joined Liana Estates with decades of winemaking experience, most recently as winemaker of the parent company, legendary Peju Province Winery in Napa Valley.

The new winery reportedly consists of the first-floor contemporary designed tasting room with walls of wood reclaimed from the nostalgic Peju family’s Pope Valley property. They cite a second floor Wine Club Lounge, and private tasting rooms including a porch on the third floor provide panoramic views of San Pablo Bay to the south.

Posted by UnwindWine at 8:29 AM No comments: