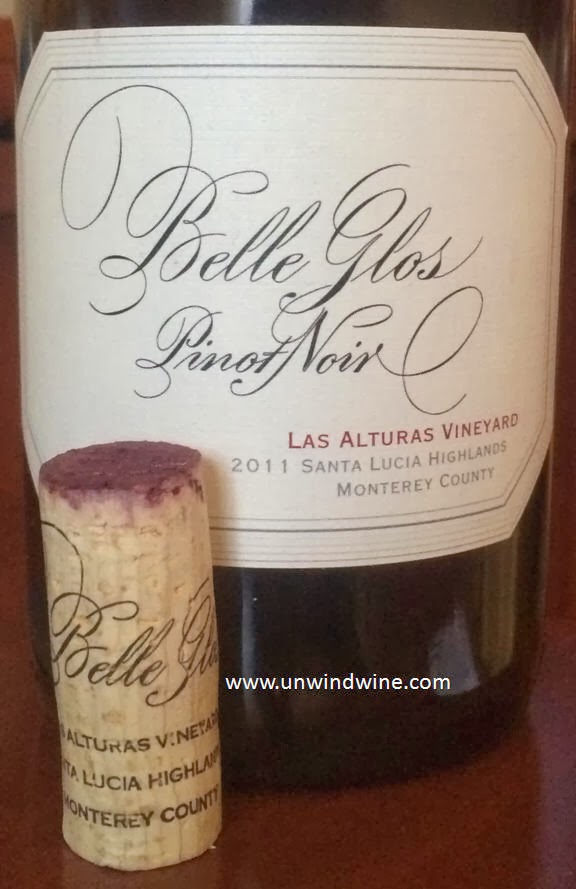 For two important client dinners, we dined at two spectacular restaurants - each with award winning wine lists. On consecutive nights, one wine label emerged as the choice for value, distinction and sophistication. Two recent vintages of Belle Glos, Las Alturas Vineyard, Santa Lucia Highlands, Monterey County, Pinot Noir were selected for premium steaks at Capital Grill, as well as duck breast and ahi tuna entrees at Charlie Palmer's Aureole. What is this wine that has this versatility, range and cache'?

The noted Caymus Napa Valley producer Chuck Wagner's grandfather acquired the land following the 1906 San Francisco earthquake. A winery was built in 1915 where he produced bulk wine until prohibition.

In 1972, Chuck and his parents, Charlie and Loma, established Caymus Vineyards named for the original Mexican land grant, Rancho Caymus, which encompassed the area now known as Rutherford. The Wagners began making wine at Caymus which has become a one of the classic benchmark Cabernet Sauvignons of Napa Valley.

Over the following decades, the Wagner family expanded into other California wine regions with their varietals suited to their distinctive climates, soil, and all the other characteristics known as terroir, that define a wine growing area's appellation. In addition to Caymus, the Wagner family produces wines under the Mer Soleil, Condundrum and Belle Glos brands.

Since its founding in 2001, Chuck Wagner’s son, Joseph, handles the viticulture and winemaking for Belle Glos which produces three vineyard-designated labels from Taylor Lane Vineyard on the Sonoma Coast, the Clark and Telephone Vineyard in the Santa Maria Valley, and this Las Alturas Vineyard in the Santa Lucia Highlands. The most widely available label is Meiomi, the fourth Belle Glos Pinot Noir, an entry level value-priced wine from declassified juice. The wines are known for their distinctive long necks dipped in garnet colored wax rather than sealed with foil.

Readers of this blog know we're not big Pinot fans and I'm not a fan of Meiomi, but then I'm on record of writing about how difficult it is to find a good sub $25 Pinot Noir. We hold a couple vintages of the Clark & Telephone Vineyard Pinot but have found it to be somewhat lackluster. What a pleasant surprise to discover this blockbuster Las Alturas! I will definitely seek it out and look forward to having it again, especially from other vintages.

Belle Glos Pinot Noirs are known for big-styled wines with generous extraction, alcohol and oak, and plenty of tannins when young. These recent vintages of Las Alturas are even more voluptuous than the earlier bottlings. This is perhaps the most vibrant, expressive extracted Pinot Noir I have ever tasted, resembling a full forward concentrated Shiraz more than the delicate lighter style of a California Pinot. 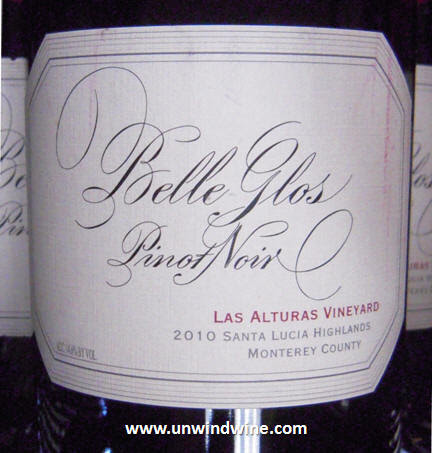 The label takes it name from the Spanish term “Las Alturas” means “the heights”,  fitting since this vineyard is located on one of the highest grape-growing benches within the Santa Lucia Highlands appellation (AVA).

The vineyard sits high in the Santa Lucia Mountain Range on the western side of Salinas Valley. The Las Alturas vineyard is subjected to the cooling effect of the early morning fog that rolls in most days from Monterey Bay, only to burn off within a few hours from the heat of late morning sun. Gusty winds flow in from the bay throughout the day moderating the overall temperature and contributing to one of the longest growing seasons in the state. The high winds also result in smaller berries with very thick skins, which contribute to color and concentration. The 15-acre vineyard is planted to match various Pinot Noir clones suitable and best fitting to the individual slopes and soil attributes of the land.

At Capital Grill on the Las Vegas Strip, we dined on prime fine filet steaks and the 2011 Vintage Belle Glos Las Alturas was up to the pairing. Resembling a Shiraz more than a Pinot, it was dark ruby colored, full bodied, rich, dense and concentrated with tones of black raspberry and blackberry fruits with tones of earthiness, spices, ripe plum, currant and black cherry flavors. The ripe tannins are nicely balanced with acidity, and the finish is long and fulfilling. 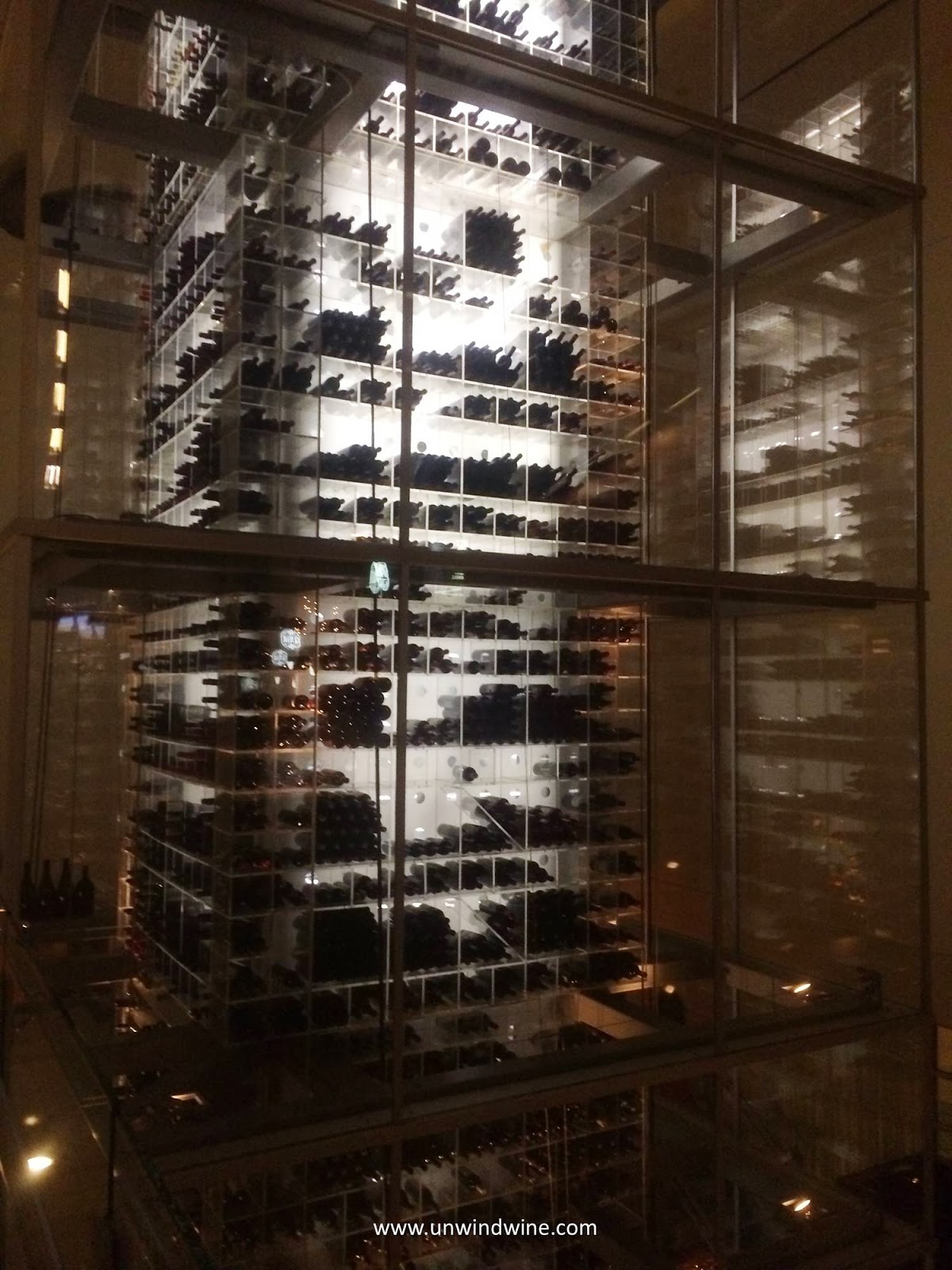 The next night we dined at the fabulous Charlie Palmer restaurant Aureole at the Mandalay Bay Hotel and Casino with its spectacular wine tower (left) and wine angels in the four story glass enclosed wine cellar, avante garde menu and chic setting.

To complement the ahi tuna and roasted breast of duck with confit orange coulis we chose the 2012 Belle Glos Las Alturas, which once proved to be a perfect choice. Dark garnet colored, only slightly lighter than the 2011, still full bodied, dense rich and concentrated with dark berry fruit flavors turning to layers of vanilla and cocoa. Once again more like a Shiraz than a Pinot with its chewy palate, structure and depth with a nicely balanced acidity on a silky supple finish."