Saturday Night in the City (Chicago) with dear friends Bob and Gloria, we started at trendy Jellyfish on Rush Street for pre-dinner sushi and drinks, to visit and support son Jason, on duty there, then went to Folklore Argentine Grill steakhouse in Wicker Park.

Located at ground zero of the trendy hip Rush Street restaurant scene in Chicago, perched on the second floor above upscale boutiques, SCOOP NYC and Ted Baker London, overlooking Hugo’s Frog Bar and Gibsons Steakhouse, Jellyfish, is an intimate pan-Asian restaurant and lounge. Jellyfish was voted one of the Top 17 hottest sushi restaurants in the US, and nominated for Chicago Magazine to the Top 10 Hot List in Chicago.

Readers of this blog will know I am not a sushi guy but our experience at Jellyfish was fabulous - the atmosphere, the food, drinks and service were all spectacular. We're already planning a return there for a special dinner. 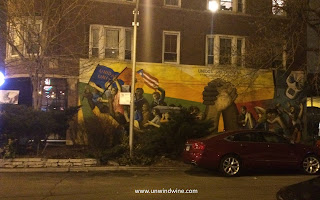 We then moved on to Wicker Park where we dined at Folklore Argentine Grill steakhouse where we took advantage of BYOB. The landmark mural on the side of Folklore is shown left.

We have dined there several times and were eager to share it with our friends Bob and Gloria who is Latin and could authenticate the cuisine experience.

Tonight was the best dinner we've had there and my El Filet, filet mignon, grilled, topped with red onion wine sauce with spinach mashed potatos (fittingly green for St Patrick's Day) was spectacular, as good as any steak entree I have ever had, anywhere!

Bob had the Churrasco grilled Sirloin steak (shown above), and Gloria had the

Garnet colored, medium bodied, moderate blackberry and plum with tones of slightly earthy tobacco and hints of anise and mocha turning to soft smooth subdued tannins on the smooth finish.

A nice accompaniment to the grilled steaks.

Readers of this blog know we're fans of big fruit filled Syrahs and this stood with the best of them, with none of that metallic, mineral or creosote that I expected of a Spanish Red. This is a blend of  70% Monastrell (and 30% cabernet sauvignon) which I now know is aka Mouvedre which is the M in GSM - Genache, Mouvedre and Syrah, a popular blend in the Rhone River Valley as well as South Central Australia. I have learned that the chief winemaker for this wine is Chris Ringland of R Wines, as in big fruity Aussie Shiraz. - is there a pattern emerging here? 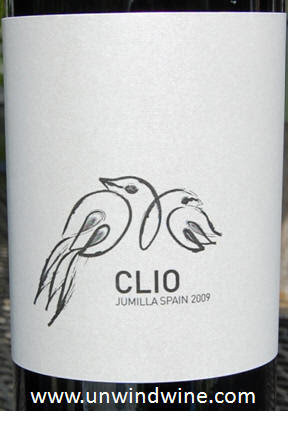 While I found this to be not as fruit filled and opulant as the earlier tasting of the 2004 (see my earlier blog of the 2004 Bodegas El Nido Jumilla Clio), the 2009 gets high marks and glowing reviews indeed. One Cellartracker reviewer compared this to an Amarone.
Glass-coating opaque blackish purple color, full bodied with a full bouquet of black fruits - black berry, black currant and black cherry, a layer of smoke, anise and expresso with a long lingering subtle oak moderate tannin finish. Give it time to open. It was more approachable ninety minutes later... but we were finished by then.
While not inexpensive at $40, it does pack a lot for that pricepoint and delivers a reasonable QPR (quality price ratio) even at that level. and it lists for more in a lot of places.
This was almost overpowering to my steak with its red wine sauce, and certainly overpowered the more delicate and sophisticated Bordeaux, but it was great in the flight progression and turned to be a great compliment to my chocolate cherry cake dessert (shown below). 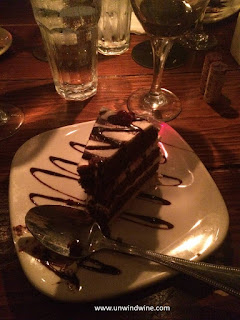 Posted by UnwindWine at 11:31 PM No comments: