After finding and tasting this wine out on the East Coast a couple times, I was surprised to find this new vintage release at the corner grocery store. Planning a stormy evening in at home with some bar-b-cue ribs, I ran out to fetch a bottle to taste this wine I saw in the store earlier in the week whilst shopping.

I wrote in earlier blog posts about discovering this wine out east, and then finding end of bin release at a local big box store. So I was interested to try this new vintage release especially with bbq rib dinner.

Like the previous two releases I had, the 2012 and the 2011, this is also packaged in an oversize heavy bottle with an oversize 'punt'. In fact the punt is the largest I think I've ever seen in any wine at any level. This is a good value at $25. The 2012 was a great value at $30. I am not driven to run out and buy more at $30 for this release, despite the fact I see it offered at $39 from several merchants. 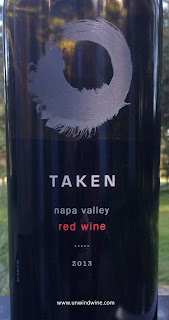 Like the previous vintages, this exhibited dark purple color and medium to full body. I had high expectations for the 2013 release given the vintage notes and the initial impression of color and body. It ended there as the fruit was a bit subdued and disjointed lacking cohesion or balance. The winemaker notes cite the purple hue and speaks to crushed graphite and expresso notes, both which I found to overtake the muted black and blue berry fruit notes, the graphite on the front and the expresso on the midpalate. They speak further about the higher than normal yields at the harvest which I equate with somewhat flabby and less then concentrated fruits. The high expectations unfortunately climaxed with the packaging and the deep rich color. We saved half the bottle so we'll see how it fares tomorrow.

This is a blend of 60% Cabernet and 40% Merlot sourced from the Napa Valley appellation. I think of Napa as being a region consisting of more than a dozen AVA appellations. Citing Napa could indicate fruit sourced from throughout the region.

Posted by UnwindWine at 7:24 PM No comments: