From their website Matthews states, their original intent since getting into the wine business was to create a flagship Bordeaux blend. This label was their flagship based on Cabernet Sauvignon but consistently using all five Bordeaux varietals. Matthews goal was to produce wines with all of the power and elegance of the Paulliac and St. Estephe Bordeaux appellations with the added intensity of Columbia Valley fruit. They ceased producing the Columbia Valley Red Wine flagship label with their last vintage in 2005.

Their highest score rating were given in 2001 and 2000 winning 90 and 91 points respectively. Their 1999 release was their next best release winning 88 points, their best achivement to date with their fifth release. According to their release notes, the 1999 harvest proved to be one of their most successful up to that time, "as ripening progressed, the top vineyards started showing tremendous potential with the consistent ripening period giving  great depth and color to the finished wine with an amazing amount of complexity. Even before the wine was allowed to spend time in the new french oak barrrels, it showed good balance and richness". The blend for the final release was 52% Cabernet Sauvignon, 37% Merlot and 11% Cabernet Franc. Their release notes said this wine should improve with age and last 10-15 years. Hence one might expect this to be the apex for this wine.

I purchased several bottles at auction knowing it was nearing end of its peak period. As such I obtained it far below it suggested release retail price of $75. The suggested release prices for the following 2000 and 2001 vintages were listed as $70 and $65, followed by $50, $60 and $44 in the 03 through 05. I don't understand the variations in prices and the diminishing price may reflect the market realities for this wine at the time. Perhaps the demise of the label in '05 was the realization they would not achieve their Pauillac, St Estephe benchmark consistently to maintain the effort.

This is the third bottle I have opened over the last year and it was similar to the last one, equally impressive, consistent in notes and rating, perhaps revealing its full potential for this stage of its life, moreso than the first one I opened of the selection which was more subdued in fruit with more of the other elements taking over. 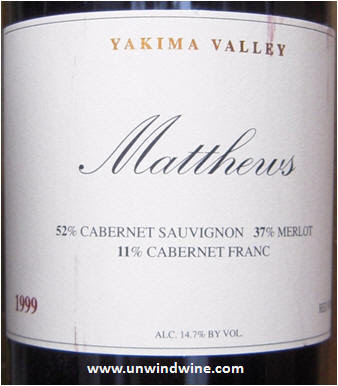 Notably, my assessment and notes for this bottle are very similar to the original Winemakers release notes - "Tightly wound nose begins with ripe cherry, black currant and an earthy espresso. A hint of black tea comes out with a small amount of exposure and an intriguing mixture of eucalyptus and toffee, a structured wine with (the) polished elegance...."

I give it the same rating as did Wine Spectator upon release,  88 Points. Medium to full bodied, I found the fruit to be moderate upon opening but brighter and more expressive the second day; complex and polished; blackberry, black currants and cherry fruits, and eucalyptus with a layer of spice, black tea and cassis with hints of tar, leather and tobacco on the lingering moderate tannin finish.  Spectator pegged the prime to be 2004 through 2008 which may have been more accurate. In any event, this wine is mature and it's time has come to drink, beyond its prime if you favor the bold forward fruits, yet polished and complex with character is you desire something more elegant and subdued.

Drink it soon and best enjoy it with moderate foods. It was a great compliment to grilled flank steak and baked sweet potatoes. I have a few more and look forward to them with food, hoping they're like this bottle rather than the first one. Interesting too, the first, earlier bottle I tasted that didn't show as well had a different label (shown left) than did this one (shown above), yet is represented as being the same vintage, source and blend. If someone can explain this it would be interesting and appreciated.