We toured the region during our Bordeaux Medoc Wine Experience 2019 last summer and drove around the Paulliac appellation to see the Baron Philippe de Rothschild properties, Mouton Rothschild, Clerc Milon and d'Armailhac. 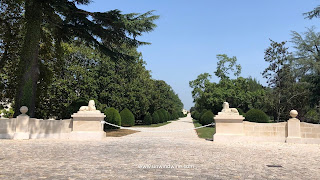 At three decades, this was showing its age in the color and opacity as it was starting to take on a slight grayish hue. The foil and label were pristine and the fill level was ideal. The cork however turned out to be partially saturated and loose providing a challenge to extract. I was able to successfully do so using an Ahso two pronged cork puller. Had one applied a traditional cork screw, it would have most assuredly pushed the cork into the bottle. Even inserting the Ahso did so and it took considerable effort and multiple attempts to insert the prongs. Extracting the cork also took considerable effort as it crumbled apart as it was coming out.

Time to drink as this is past its prime and starting to wane.

The 1989 vintage was a great year with a warm spring and early flowering followed by heat throughout the summer, leading to Clerc-Milon's earliest harvest of the twentieth century to that point.

From the same ownership, Château d'Armailhac is another label in the family of brands of Baron Philippe de Rothschild 2016 sourced from near contiguous properties just outside the village of Pauillac in the northern Medoc.

Vinous says "This fulfills all my expectations and is quite simply one of the best d’Armailhac wines ever made."

Posted by UnwindWine at 8:22 AM No comments: